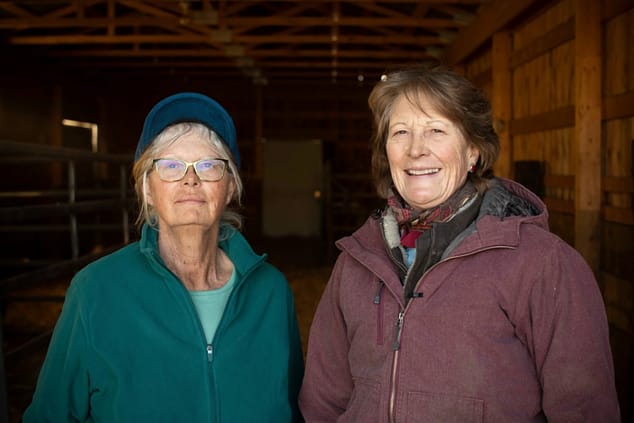 Bonnie and Nancy Bath plan to site wind turbines from the Rail Tie Project on their family ranch. They hope to make enough income to keep from having to sell the land for subdivision.

A group of Albany County homeowners faced a setback last month in their effort to block construction of a wind farm they say would spoil their backyard views.

The Wyoming State Board of Land Commissioners (SBLC) approved a lease at its January meeting for the Rail Tie Wind Project, permitting wind turbines on a section of state school trust land in the southern part of the county. The state land is adjacent several larger sections of private land where the majority of the wind farm would go.

The homeowners’ campaign to block the wind farm gained statewide and even national attention last fall, when the Wyoming land board initially declined to issue the lease.

Observers wondered whether fossil fuel dependence and climate change denial in Wyoming were so strong that renewable energy companies might have trouble doing business here, despite our abundant sun and wind.

But a coalition of Wyoming energy workers, ranchers, and young people mobilized for the January meeting to back the Rail Tie project. They convinced the SBLC to reverse course and approve the state land lease.

The anti-wind group will now appeal to the Albany County Commission at its March 2 meeting in an attempt to change the county’s wind energy regulations and stop the project.

But local clean energy proponents are continuing to organize support for the Rail Tie project. The outcome may help determine the trajectory of renewable energy development in Wyoming.

The homeowners’ group has spent more than a year putting up billboards, building websites, hiring attorneys, and buying social media ads to promote their cause.

“CEOs are building out south of town. And all of a sudden we start ruining the viewshed?”

Their arguments against the Rail Tie project vary, from viewshed concerns to half-baked theories about wind energy’s efficiency. On Facebook, their posts attract support from climate change deniers and conspiracy theorists, as well as people who generally oppose clean energy development.

At the January state land board meeting, however, many in the anti-wind group stuck to a consistent argument: southern Albany County is not suitable for wind turbines because that’s where the rich people live.

“Companies that we’ve attracted to our community, their CEOs are building out south of town,” Furphy said. “It’s where our top-end executives are moving. And so all of a sudden we start ruining the viewshed out there?”

Former Wyoming Senate President Phil Nicholas, an attorney for the homeowners’ group, told the state land board that there are few areas in Albany County suitable for businessmen to build million-dollar homes. But the area around the proposed Rail Tie Project is one of them.

“Every major company that has ever come to look at Laramie has almost always indicated that there was a lack of housing to recruit businesses,” Nicholas said. “We have to have high-end developments.”

Ron Wilson, a homeowner near the proposed Rail Tie site who owns the Laramie Hilton Garden Inn, told the state land board that he would have never built his hotel if there had been a wind farm near his home.

“I wonder how many other businesspeople like me—other Ron Wilsons—won’t come and see the beauty here because of a wind farm,” he said.

Supporters of the Rail Tie project focused on the economic, climate, and revenue benefits of the proposal, as well as its potential to help local ranchers keep their land intact.

“We had to scramble to preserve as many jobs as we could. One of the areas we were able to pivot to was in the renewable market.”

Dan Pluid told the state land board that his company, Bar S Services, has serviced the oilfield for the past 30 years. But he sees a future in the wind industry.

“With the economic shifts that have occurred over the last year, with the pandemic and the disruption in the industry, we had to scramble to preserve as many jobs as we could,” Pluid said. “One of the areas we were able to pivot to—to keep people employed and working and taking care of their families—was in the renewable market.”

Mark Eisele, past president of the Wyoming Stockgrowers Association, runs cattle on land with wind turbines in Laramie County. He said in contrast to wind farms, high-end subdivisions actually cost a county money.

“The largest cost to a county—and the University of Wyoming did a great study on this—is a subdivision,” he said. “They’re really expensive, and they’re not covered by property taxes. By the time you include snow removal, fire and police, school additions, it ends up being a loser.”

Juan Reyes and his wife, Joni, began their ranching career in Albany County more than 40 years ago. The area south of Laramie was still a working landscape then—instead of a bedroom community.

“At that time, in 1977, there were two permanent dwellings,” Reyes said. “The permanent residency hasn’t changed much since then. Seasonal residency has changed considerably. Now there’s a house or mansion on every draw, every spring, and even on top of mountaintops.”

Reyes and other ranchers disagreed with claims that “high-end development” was the best use for the area.

“It is not considered a private development area by us,” local rancher Bonnie Bath said.

Bath’s family has owned their ranch since 1940, providing intact habitat for wildlife and cattle grazing. She has said that if it weren’t for the Rail Tie Project, her family would have to sell their ranch for subdivision, “which is about enough to make a person turn over in their grave.”

The next generation speaks up

Wyoming’s young people delivered among the most powerful testimony at the state land board’s meeting. As the generation that will have to deal most with the consequences of climate change, young people are speaking up for clean power development.

“When I see more and more windmills cropping up around the state, I see it as a beacon of hope.”

“We’ve seen those effects on the economy, but more importantly, on the Wyoming people,” Nair said. “As a young Wyomingite, I want to live in a state that listens to science and that will face these kinds of problems head-on. Seeing undertakings like the Rail Tie Wind Project being introduced is so incredibly encouraging. When I see more and more windmills cropping up around the state, I see it as a beacon of hope.”

Young people who took part in a recent Better Wyoming event to forefront youth voices in the discussion about the state’s energy future were particularly interested in the Rail Tie Project and plan to advocate for it at the county commission meeting and coming months.

Wyoming lawmakers use “voter fraud” hysteria to push ID bill
Scroll to top
Share this ArticleLike this article? Email it to a friend!
Email sent!