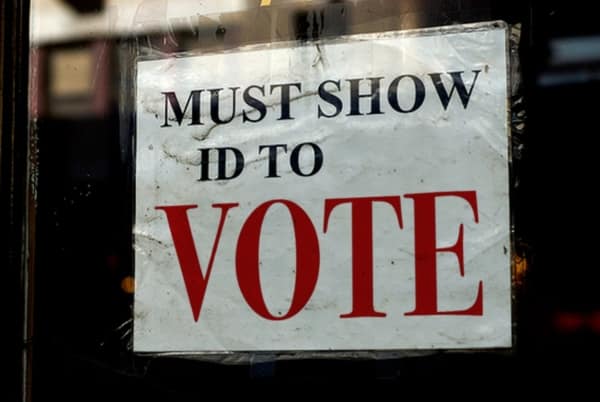 Supporters of the bill presented no evidence of voter fraud in Wyoming, yet claimed it might happen in the future.

Dozens of Wyoming lawmakers have sponsored a bill to require voters to present IDs at the polls because, they say, people are losing confidence in our election system.

Rep. Chuck Gray (R-Casper), the bill’s main sponsor, pointed to low GOP turnout in the Georgia Senate runoffs in January as evidence that people just don’t vote when they think the system’s rigged.

But Wyoming does not have a problem with voter fraud or voter confidence. In fact, Wyoming saw record voter turnout in 2020.

Only four people have been convicted of voter fraud in Wyoming in the past two decades. None of these cases involved voter impersonation.

“This proposal would support the false narrative that our elections are insecure and the results are unreliable. I don’t think that’s true and I’ve seen no evidence of it.”

Wyoming League of Women Voters member Marguerite Herman said these facts affirm that our current voting system does not suffer from a lack of confidence or voter fraud issues.

“This proposal would support the false narrative that our elections are insecure and the results are unreliable,” Herman told the House Corporations Committee. “I don’t think that’s true and I’ve seen no evidence of it.”

Committee member Rep. Andi Clifford (D-Riverton) asked Gray if he could cite a Wyoming example about loss of voter confidence. He couldn’t, falling back on the Georgia example as “applicable to Wyoming.”

But it’s only applicable because Gray and his colleagues have repeated baseless claims often enough about voter fraud in the 2020 presidential election to make people believe them.

Most of the lawmakers sponsoring HB-75 also signed a letter asking Wyoming Governor Mark Gordon to join a Texas lawsuit contesting the results of the U.S. presidential election on the basis of—you guessed it—voter fraud.

The lawsuit, of course, was laughed out of every court it entered.

The Wyoming State Republican Party has pushed for a voter ID law for years. But the GOP-supermajority Legislature has rejected their efforts, simply because there was no voter fraud problem to fix.

Now that national hysteria over voter fraud has planted the seed in people’s minds, however, a voter ID law appears to be just the first step toward limiting Wyoming’s elections.

In February, the Wyoming State Republican Party passed a resolution calling to ban mail-in voting, curbside voting, and ballot drop boxes, along with electronic vote-counting machines. The resolution also calls for Wyoming not to join the rest of the nation in allowing people to register to vote online.

Without evidence of voter fraud, people looking to limit Wyoming’s elections argued that the Legislature must act now to stop potential fraud in the future.

“Everyone says [voter fraud] can’t happen in Wyoming,” Wheatland resident Chloe Butler said. “But by the time it gets where we have to question whether or not fraud is happening, it’s too late. We’ve already got people in your seats that stole your seats from you.”

Cassie Craven, a lobbyist for the right-wing Wyoming Liberty Group, said we must address voter fraud before it happens.

“I don’t support a method of lawmaking that sits back and waits until something is broken before we take initiative to fix it,” she said.

By this logic, the Legislature could enact any variety of voter limitations under the pretense that fraud might happen at some point. And if the state GOP’s resolution is any indication, the voter fraud boogeyman will be a tool put to frequent use in their ongoing campaign to keep people from the polls.

The only non-photo ID that could be offered is a Medicare insurance card. Tom Lacock of Wyoming AARP said his organization, which has opposed voter ID laws in the past, supports the bill because of this provision.

The Corporations Committee voted 6 – 3 to advance the bill to the full House, where it already has enough co-sponsors to pass the chamber. HB-75 has half of the Senate as co-sponsors, which virtually guarantees its approval.

In the committee, Clifford and Reps. Jim Roscoe (I-Wilson) and Aaron Clausen (R-Douglas) voted no.

Clausen said he opposed the bill because there’s no reason to fix a problem that doesn’t exist.

But as long as the problem of voter fraud exists in people’s minds, the sky will remain the limit when it comes to narrowing down who gets to vote in Wyoming.