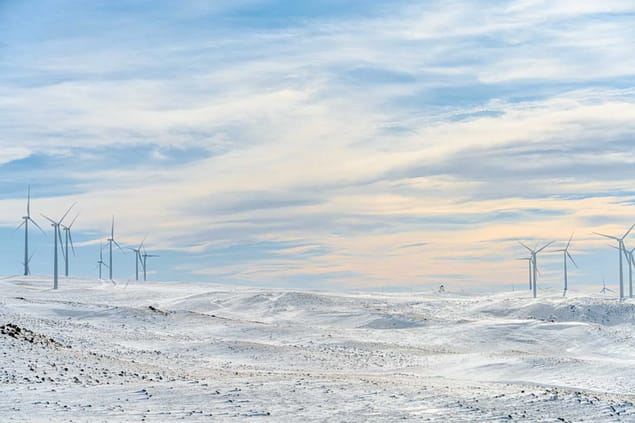 The wind industry is an increasingly important source of county tax revenue in Wyoming.

Fossil fuel evangelists in the Wyoming Legislature have not been able to completely hamstring the state’s budding wind and solar industries. But it’s not for a lack of trying. Their repeated attempts create an environment of uncertainty that discourages growth in the state’s clean power economy.

The House Revenue Committee defeated proposals last week that would have raised taxes on solar and wind energy.

Wind industry lobbyists are accustomed to traveling to Cheyenne each year to explain to lawmakers why tinkering with the state’s already cumbersome tax structure would hurt development.

There are bills to increase Wyoming’s wind tax rates every single legislative session.

This year, lawmakers decided to add a bill targeting utility-grade solar energy, just for good measure. Wyoming has a total of one utility-scale solar array. But hey, any carbon-free power is a threat to coal!

Meanwhile, a yearslong campaign to kneecap rooftop solar is finally gaining some traction. A measure that would effectively end the practice in Wyoming has already passed the Senate and awaits consideration by the House.

It’s unclear whether the supporters of these bills actually believe they will help slow the fossil fuel industries’ declines, or if they’re just bringing them out of sheer frustration and spite.

Many Wyoming lawmakers cling to the belief that taxes kill business. So, when a lawmaker who has never voted for a tax proposal in his life because he’s “pro business” brings a bill to tax renewable energy, you can guess what he’s getting at.

House Bill 108 would have doubled Wyoming’s wind tax rate, from $1 to $2 per megawatt. It would have also removed the three-year exemption from this tax that wind farms enjoy upon construction.

Wyoming is the only state that taxes wind power generation. So, the current exemption is from a tax that exists in no other state.

A study from the University of Wyoming concluded that Wyoming’s “unique” tax structure had transformed the state from a leader into a laggard in the wind industry.

“I don’t want to see our tax base eroded by giving tax subsidies here in the state,” he said.

Finally, Hallinan admitted to the committee that his bill was essentially retribution.

“We need to charge these [wind] companies for the amount of damage that’s being done to our tourism business and our way of life into the future,” he said.

The committee voted down the bill 2 – 7, with Hallinan and Rep. Mark Baker (R-Green River) its only supporters. The solar tax bill met the same fate.

Of course, renewable energy industries should pay their fair share in taxes. And they do.

Matt Micheli, a Cheyenne attorney who represents several wind companies, said 30 wind projects are in various stages of the regulatory pipeline across Wyoming. These will generate nearly $1.5 billion in tax revenue over the lives of the projects.

“We just don’t want to have this conversation every two months.”

Laramie County rancher Mark Eisele, who testified at the committee hearing on his phone from his pick-up truck, agreed.

Eisele has wind turbines on his property, and his wife is the Laramie County treasurer.

“The tax revenues generated for the county [by wind projects] are enormous,” he said. “You’ve got to be careful killing the goose that lays the golden egg.”

Tom Darin of the American Clean Power Association said Wyoming companies are more than  willing to pay taxes. But it would be best for everyone if the state just decided on a rate and stuck with it.

“We just don’t want to have this conversation every two months,” he said.

Darin said the Wyoming Legislature’s constant efforts to change or raise taxes makes it hard to do business, in particular because they spook potential partners—like utilities—that are necessary to bring projects to completion.

Efforts to raise wind taxes have failed repeatedly in the Wyoming Legislature.

But so, too, had efforts to kill the state’s rooftop solar industry—until, perhaps, this year.

Prior years’ bills targeting solar “net metering” would have directly cut the rate at which rooftop solar customers can sell excess energy back into the grid. These bills have all died, in large part because of public outcry.

In Wyoming, if you’re in the renewable energy market, many “pro-business” lawmakers would just as soon see your venture die.

Under current rates, residential and small-scale public and commercial buildings with solar panels earn enough by selling excess energy that they can offset the cost of installation.

This year’s bill, Senate File 16, is a trickier creature. It does not by itself cut the rate, but instead gives the Wyoming Public Services Commission the ability to cut it. This allowed the slightly watered down proposal to narrowly gain approval in the Senate.

The Wyoming Public Services Commission is the entity Governor Mark Gordon used to bully PacifiCorp, the state’s biggest electricity provider, over its plans to move from coal to renewable energy.

Allowing the Public Service Commission to cut the rates would make it financially unfeasible for anyone to install small-scale solar.

Just as with the wind and solar tax rates, the Legislature’s insistence on monkeying with rooftop solar creates an environment of uncertainty that kills businesses.

But in Wyoming, if you’re in the renewable energy market, many “pro-business” lawmakers would just as soon see your venture die.