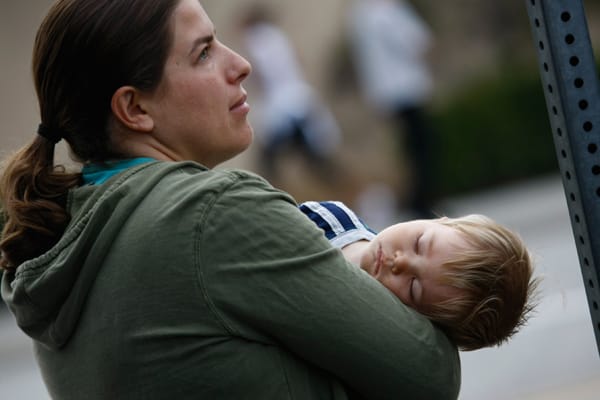 For years, the Wyoming Legislature has blocked tens of thousands of low-income state residents from obtaining health insurance via Medicaid. Many lawmakers claim that the cost is just too high.

But new federal funds are now available to cover the cost of updating Wyoming’s Medicaid program. And on Monday, dozens of people showed up to a state Senate committee meeting to demand they do just that.

After more than an hour of impassioned testimony in favor of Senate File 154, the Legislature’s Senate Labor, Health and Social Services Committee voted 3 – 2 in favor of advancing the bill, which would extend state Medicaid insurance coverage to an estimated 24,000 Wyomingites.

The bill will now go before the full Wyoming Senate—as long as Senate leadership allows it to be debated on the floor.

The meeting on Monday made one thing clear: There is a large and growing body of Wyoming residents who are tired of the Legislature’s inaction on healthcare, and they will be pushing senators to support this bill.

Funds to spur Wyoming along

The COVID-19 relief package set to pass Congress this week includes additional funding for states like Wyoming to update their Medicaid programs.

Wyoming is one of only 12 states in the nation that has failed to update its Medicaid program since 2010, and the only state in the Mountain West.

As more and more low-income people across the nation get basic insurance via their states’ Medicaid, folks in Wyoming are beginning to understand what the Legislature is keeping from them.

The COVID-19 relief funds would provide Wyoming with an estimated $120 million, which is enough to cover the state’s cost to update Medicaid for a decade.

All the single ladies

The vast majority of people who would obtain insurance coverage as a result of SF-154 work low-wage jobs that don’t provide insurance.

According to testimony Monday by Josh Hannes of the Wyoming Hospital Association, three-fourths of the new enrollees under SF-154 would be single mothers.

“I have never worked harder than when I was in poverty. Many people need this. They are drowning, and you hold the life preserver.”

Marcie Kindred, a Cheyenne realtor and 2020 legislative candidate, testified to the committee that she relied on public support in the form of food stamps and Medicaid while raising her four boys. Today, she is financially stable in large part because of “good old government assistance.”

“There’s this really horrible idea that assistance of any form makes people lazy,” Kindred said. “Tough love in the West, pull yourself up by the bootstraps and all that nonsense. I assure you that I have never worked harder than when I was in poverty. Many people need this. They are drowning, and you hold the life preserver.”

When people can’t afford insurance, they often delay care until the last minute. When they finally get care, their ailments have gotten worse. And because they can’t pay, the costs pass on to everyone else.

Marilyn Kenny, a Cheyenne nurse, explained to the Senate Labor Health Committee what this looks like firsthand:

“When there’s no help with the cost of care, we end up with the long-term costs of people being in and out of the hospital.”

“I have seen so many people come in who are desperate and need Medicaid,” Kenney said. “A gentleman came in whose foot was black and draining pus, and I asked what happened. He said, ‘I’m diabetic. I work to make a living for my family, and I can’t afford health insurance or insulin to take care of myself.”

Elizabether Ridgway, a Jackson pediatrician, explained how we all end up footing the cost for folks who don’t have insurance.

“When there’s no help with the cost of care, we end up with the long-term costs of them being in and out of the hospital,” Ridgway said. “Are we going to put them all out on the street and then put them in the hospital? It’s going to cost you one way or another. And it already is.”

Wyoming hospitals write off an estimated $100 million per year from providing care to people who can’t pay. According to a new report by the Chartis Group, 65 percent of Wyoming’s rural hospitals operate in the red for this reason.

Hospitals recover some of the money they lose from “uncompensated care” by charging patients who can afford health insurance more for services, which in turn leads to higher premiums.

Wyoming has some of the highest healthcare costs in the nation.

On Monday, two of the Senate Committee members railed against SF-154 for this reason, including Sen. Troy McKeown (R-Gillette).

But one of McKeown’s constituents who testified at the meeting noted that, as a veteran, the senator received benefits through the federal Veterans Affairs program. Another commenter pointed out that the VA is socialized medicine. And so is Medicare.

Sen. Rothfuss, the bill’s sponsor, said his colleagues who want to use the Medicaid bill as a way to grandstand against their ideological opponent—socialism—should look at how their actions are affecting Wyomingites who desperately need help.

“We’re taking a principled stand with the lives of 25,000 Wyomingites who don’t have the luxury of sitting here today having this chat,” Rothfuss said. “The working poor, the moms with two or three kids, the mentally ill. Those are the lives we’re playing with, and we’ve offered them nothing for the last decade.”

The Legislature’s plan to keep Wyoming burning coal (whether we like it or...
Scroll to top
Share this ArticleLike this article? Email it to a friend!
Email sent!