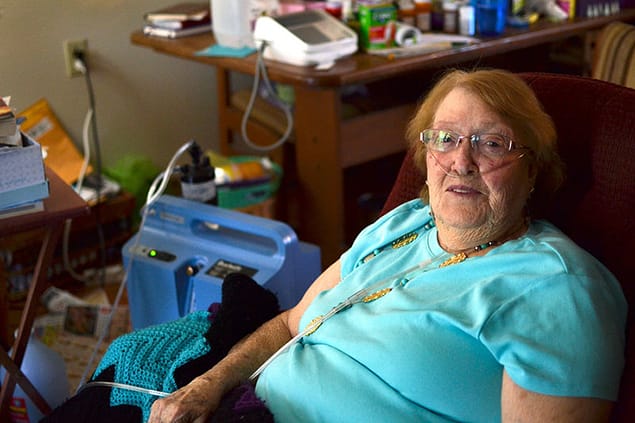 Many of the people who would qualify for insurance are between 50 - 64 years old.

Two separate bills that would update Wyoming’s Medicaid program and extend coverage to 24,000 uninsured people in the state have now advanced out of committees in the Legislature.

If approved by the Legislature, HB-162 would offer Medicaid insurance coverage to adults who earn less than 138 percent of the federal poverty level—for instance, a single parent working full time for $12 an hour.

At the meeting Thursday, Wyoming Hospital Association President Eric Boley told the committee that three quarters of people who would become eligible are single mothers with two children.

“They are working multiple jobs but they don’t have insurance [through their employers],” Boley said. “They can better their lives and help their families.”

The measure would also bring hundreds of millions of dollars in federal funding to Wyoming to bolster our hospitals and healthcare system.

Both measures have until Monday to be heard on the floor of their respective houses of origin, or they will fail to meet a procedural deadline and be dead for the session.

[Confused about the fact that there are two Medicaid expansion bills? Check out this explanation]

Wyoming is one of only 12 states that has not updated its Medicaid program. Part of the COVID-19 American Rescue Plan that recently passed Congress offers these states, including Wyoming, financial incentive to do so.

Under normal circumstances, the federal government covers 90 percent of the cost for a state to update its Medicaid program. Under the new relief plan, Wyoming would receive an additional $120 million in federal funding on top of this—or, enough to cover the state’s cost for more than a decade.

“I’m one of the people that’s not insured. I’m probably the poorest person in both chambers.”

This enticement has proven attractive to some Wyoming lawmakers, particularly during a budget crunch.

“I’m one of the people that’s not insured,” Romero-Martinez said. “I’m probably the poorest person in both chambers. So I’ve got a bone to pick, but it’s not about me picking a bone. It’s about there’s thousands of people that are not currently covered under an expansion that we have failed to produce.”

Romero-Martinez noted that his cousin, former State Senator Floyd Esquibel, was among the first Wyoming lawmakers pushing to update the state’s Medicaid system when the option became available under the Affordable Care Act.

Former Senator Esquibel was a Democrat. Romero-Martinez noted in his introduction the bipartisan nature of his own effort.

The doctor is too expensive

Thursday night’s meeting did not begin until nearly 7 p.m., so the committee chairman limited public testimony. Nevertheless, a number of people from across Wyoming joined via Zoom to testify in favor of the bill.

Maggie McCallister said she has long been involved in Sublette County’s agricultural community. In addition to growing crops, she served on the original board of the Wyoming Food Freedom Coalition and she founded the Pinedale farmer’s market.

But the 60-year-old said she does not go to the doctor when she gets sick because she cannot afford it. A plan on the Healthcare marketplace would cost her $1,200 a month with no preexisting conditions.

“I am a farmer. I have been helping to feed my local community since 2006. I have no health insurance,” she said. “Farmers are essential workers, yet many struggle to pay for health insurance and are usually underinsured.”

House Minority Leader Cathy Connolly (D-Laramie) said studies show that health care outcomes have improved over the past five years for people in states that have expanded Medicaid.

In addition to the working poor who would now benefit, Connolly noted that more Wyoming extractive industry workers are losing their jobs, and with it their health insurance.

“There isn’t affordable health insurance for them in Wyoming,” she said.

Dr. Ryan Jackson of the American Cancer Society’s Cancer Action Network noted that in states that have expanded Medicaid, there has been a significant increase in the number of screenings, which has led to finding cancer sooner.

Boley, the hospital association president, said that when people without insurance get really sick, they often seek treatment at hospital emergency rooms.

Because they can’t afford to pay, Wyoming hospitals annually lose between $95 million and $125 million in uncompensated care costs, he said.

Hospitals recoup some of their costs by charging more for their services to patients who can afford health insurance, which drives up the cost of premiums. Not expanding Medicaid creates a situation in which no one in the healthcare system wins.

Franz Fuchs, Department of Health policy analyst, said in addition to the $120 million Wyoming will receive, the feds have also raised the amount they will pay for “regular” Medicaid patients from 50 percent to 55 percent.

The 5 percent bump, which the state would get for two years, represents a savings to the state’s General Fund’s Medicaid expenses of $34 million.

Dollars and care: Wyoming House gives initial approval to Medicaid upgrade
Scroll to top
Share this ArticleLike this article? Email it to a friend!
Email sent!