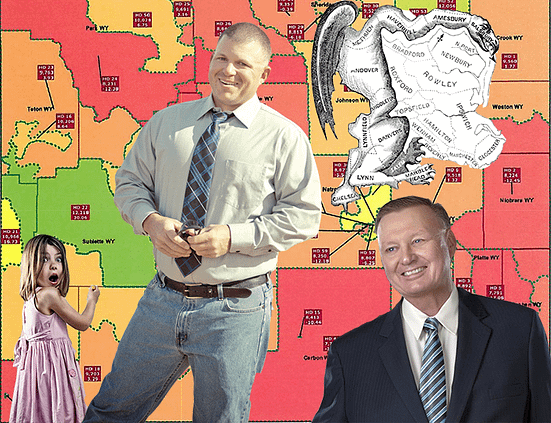 Welcome to the wild and weird world of legislative redistricting.

If you pay close attention to politics, you might know that “gerrymandering” is the practice of dividing up electoral districts to favor one lawmaker (or party) over another.

But unless you’re a real political wonk, it’s likely you don’t know much about how it happens. This is unfortunate. Gerrymandering takes place during the process of “redistricting,” which is one of the most critical tasks the Wyoming Legislature undertakes.

It also makes sense why few people pay attention to redistricting. It’s one of the most convoluted, involved—and, yes, boring—jobs the legislature has. Compared to hot-button topics like guns and abortion, it can seem like a real snooze fest.

The rub, of course, is that redistricting plays a huge role in determining who gets to make all the decisions about guns and abortion—and everything else, for that matter. So people should learn about it and, if possible, participate.

And just your luck: the once-in-a-decade redistricting jamboree kicks off before the Legislature’s Joint Corporations Committee this summer. The full Legislature will vote on new district boundaries during its 2022 budget session, next February.

Your voting address determines which lawmakers represent you in the Wyoming State Legislature. Two people living on opposite sides of the same street might have different Wyoming state senators or state representatives. It all depends on where the boundary lines are drawn.

This can seem confusing to people who only pay attention to national politics, since everyone in Wyoming shares the same members of the U.S. Congress. John Barrasso, Cynthia Lummis, and Liz Cheney are your representatives in Washington, D.C., whether you live in Jackson or Cheyenne, Evanston or Gillette.

To make things even more confusing, these districts change. Every 10 years, Wyoming uses U.S. Census data to redraw its legislative map to reflect shifts in the state’s population. As different parts of the state grow or shrink, some districts will start to contain more people than others.

Since people move around, however, the state’s districts must adjust. That’s where redistricting comes in.

Creativity and its relative, abuse

Redistricting is a tricky process. Population densities vary wildly in Wyoming, requiring some districts to be tiny while others are huge.

Only 10 or so towns in Wyoming contain more than 10,000 people. Meanwhile, dozens of municipalities contain fewer than 100 people.

Trying to draw lines around all these scattered people in order to create equal districts can be challenging. The process requires creativity, and it also invites corruption and abuse, often in the form of “gerrymandering.”

Since sitting lawmakers are the ones who create the districts, people in power can use the redistricting process to stay in power.

Since sitting lawmakers are the ones who ultimately create the districts, people in power can use the redistricting process to stay in power.

Members of the majority party can slice and dice populations where they know large concentrations of the opposing party lives, splitting them into separate districts where they’ll never muster enough votes to win a seat.

Likewise, individual lawmakers can use similar shenanigans to ensure their own seat in the Legislature is protected, even if it results in districts that look like they were drawn by hyperactive kindergartners.

Why doesn’t Green River have a senator?

How are lawmakers supposed to determine where to draw district lines, since they’re often cutting across huge swaths of the state?

One factor deals with “commonalities” shared by a district’s residents. There’s no rule or law that states exactly what that means, but in 1994 the U.S. Supreme Court provided some guidance.

The court said within a district’s boundaries, citizens should be able to relate to each other and their representatives. “It speaks to relationships that are facilitated by shared interests and by membership in a political community, including a county or city,” the court said.

Take, for instance, Senate District 13, which covers all of Green River. At roughly 12,000 people, Green River is one of the 10 largest towns in the state. But unlike every other town of its size in Wyoming, Green River does not have a senator of its own.

This is the case because, in addition to covering all of Green River, SD-13 also includes an oblong section that stretches twelve miles down Interstate 80 and covers a small portion of Rock Springs. In this small portion lives Sen. Tom James, who currently sits in that district’s seat.

“If the Corporations Committee decides that Green River and Rock Springs should have their own state senators, James might be ‘drawn’ out of his own district.”

It’s hard to know why SD-13 was drawn in such a salamander-like manner. But it’s fairly easy to argue that James, as a Rock Springs resident, does not possess as much “commonality” with the people he represents in Green River as a senator from that town would. For most of the past decade, Green River resident John Hastert held that seat.

If the Legislature’s Joint Corporations Committee decides that Green River and Rock Springs should have their own state senators, James might be “drawn” out of his own district.

The prison and the Good Ol’ Boys Club

In the event that a sitting lawmaker’s district is redrawn so they no longer live in it, that lawmaker is forced to run in the next election against whoever represents their new district if they want to stay in the Legislature.

So, in James’ case, he would likely be forced to run in a primary against the other current Rock Springs senator, John Kolb.

As you might guess, this kind of situation can cause some uncomfortableness among the Good Ol’ Boys Club. And as you also might guess, sitting lawmakers sometimes go to ridiculous lengths to try and protect themselves and their colleagues.

In 2012, population changes in the southeastern part of the state meant that then-Sens. Curt Meier (R-LaGrange) and Wayne Johnson (R-Cheyenne) would be in the same district. They would have to face each other in the next primary.

To keep that from happening, Meier had an idea: the boundary lines for Johnson’s Senate district, which was mostly in rural Laramie County, could be snaked up the Nebraska border to include the medium-security prison in Torrington.

The prison, of course, is one of the most densely populated places in that part of the state. Prisoners can’t vote, but voting districts are based on Census data. The Census counts one’s residence as where a person eats and sleeps. So, these prisoners provided just enough of a population bump in Johnson’s district to allow Meier to remain in his own district.

This type of “prison gerrymandering” is not unique to Wyoming,  but the director of the national Prison Policy Initiative said at the time it was the most egregious example he had ever seen.

Some people grumbled at the blatant abuse—a group of residents sued the state of Wyoming over the so-called “Meier amendment.” But the lawsuit was thrown out, both Meier and Johnson kept their seats, and now Meier is the Wyoming State Treasurer.

It’s good to be the ones in charge of drawing the maps.

Wyo. lawmakers bend over backwards to support male-dominated industries. Those...
Scroll to top
Share this ArticleLike this article? Email it to a friend!
Email sent!