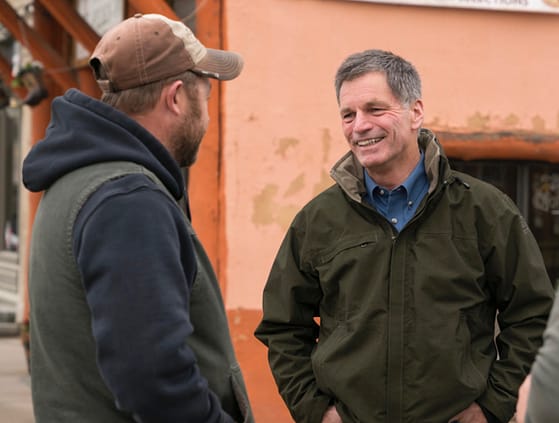 Gov. Gordon, who has overseen hundreds of millions of dollars in cuts to women-dominated healthcare and education industries, mugs with a miner in an image from his campaign website.

There are a couple things going on here. The Wyoming Department of Workforce Services finds that, even when men and women have similar qualifications and work the same job, men get paid more. That’s just simple misogyny.

A murkier aspect of the gender wage gap deals with the types of jobs men and women in Wyoming work. High-paying jobs in the mining industries, for instance, are mostly occupied by men. Meanwhile, Wyoming women tend to work in industries like healthcare, education, and retail, which pay less.

Wyoming lawmakers are happy to shovel public funding into the declining fossil fuel industries to try to save coal miners. But they don’t blink an eye when they cut funding that costs dozens of healthcare or public school jobs.

In reality, it’s anything but natural. Wyoming is a “mining state” in large part because lawmakers provide all the public investment and political support they can to the mining industries. In return, mining industries  have “paid the bills” in Wyoming via tax revenue.

Wyoming’s male-dominated political class—including the Legislature, which is roughly 85 percent men—is happy to shovel public funding into the declining fossil fuel industries to try to save coal miners. But they don’t blink an eye when they cut funding that costs dozens of healthcare or public school jobs.

One can imagine that with an adjustment of priorities, industries that employ Wyoming women could thrive, as well. But those priorities aren’t going to adjust themselves—and with the current gender makeup of the Legislature, some turnover might be required.

Mining industries on the dole

No major industries employ fewer women than mining, and in Wyoming no industries receive as much political support.

No major industries employ fewer women than mining, and in Wyoming no industries receive as much political support.

Less than 5 percent of the nation’s coal miners are women. And while women make up about one-fifth of the oil and gas industry, they tend to occupy lower-paying office jobs rather than technical or management positions.

It’s hard to characterize just how much political support mining industries in Wyoming receive. But lawmakers’ scramble to prop up the declining coal industry in recent years is a place to start.

In 2020, legislators gave Gov. Mark Gordon $1 million to help market Wyoming coal. This year, they added a $1.2 million fund for lawsuits against states that try to stop burning coal.

Wyoming lawmakers have spent significantly on “carbon capture” as a way to keep coal viable. Under former Gov. Matt Mead, Wyoming spent $15 million to create the Integrated Test Center, a carbon capture research facility. This year, the Wyoming Business Council chipped in $1.5 million on a “coal commercialization” facility near Gillette. This spring, Gov. Gordon and Wyoming’s Congressional delegation helped secure a $3 million federal grant to support Wyoming-based research “focused on expanding and transforming the use of coal.”

Basically none of these tens of millions of dollars in public funding for coal finds its way into Wyoming women’s paychecks. And coal isn’t the only male-dominated mining industry on the government dole.

Basically none of these tens of millions of dollars in public funding for coal finds its way into Wyoming women’s paychecks.

In 2020, Gov. Mark Gordon and the Legislature handed over $30 million in COVID relief funds to the oil and gas industry, and more than $12 million this year from the American Rescue Plan.

Again, very few Wyoming women directly benefited from this government “rescue” or “relief.” And this public investment does not account for the less quantifiable political support mining receives in the form of lax regulations and general political boosterism.

With all these men out there making good money in the oilfields and mines, you might imagine plenty of Wyoming women stay home and don’t work.

A new report by the Wyoming Women’s Foundation shows that women make up 40 percent of the state’s full-time civilian workforce. More than half of these are employed in three industries: healthcare and social assistance, retail, and education.

More than half of working Wyoming women are employed in three industries: healthcare and social assistance, retail, and education.

And while lawmakers are busy shoveling public funds into the mining industries with one hand, they’re using the other to defund sectors where women work.

Public education has been traditionally well funded in Wyoming thanks to a series of state Supreme Court cases forcing the Legislature to pony up. But the contrast in recent years between support for male-dominated mining and women-dominated education work couldn’t be starker.

As legislators scramble to prop up the struggling mining industries, they have cut more than $100 million from the state public education budget. This is in addition to the more than $80 million in cuts handed down to the University of Wyoming and more multi-million-dollar cuts to the state’s community college system. These institutions employ tens of thousands of Wyoming women who find their jobs disappearing or under threat.

Another major women-employing sector, healthcare, has experienced similar treatment. Women hold nine out of 10 healthcare support jobs in Wyoming, but many of those jobs are at risk as the Legislature cut more than $100 million this year alone in Department of Health funding. Ninety percent of that department’s funding passes through to local community health clinics, and already facilities are closing as a result of the cuts.

State lawmakers have largely stood by as Wyoming’s healthcare industry has atrophied over the past 50 years. There are fewer medical professionals working in Wyoming per capita today than in the 1960s.

Surrounding states, like Montana, have seen tremendous boosts to their healthcare industries from expanding Medicaid, which brings in hundreds of millions of dollars to help fund healthcare jobs, many of which are filled by women. One report estimates that Medicaid expansion in Montana created 6,000 healthcare jobs. Although Medicaid expansion in Wyoming has earned significantly more support this year, lawmakers still refuse to accept the federal funds that would, on the whole, benefit mostly women.

Meanwhile, lawmakers’ contempt toward minimum-wage workers—which, again, in Wyoming are 75 percent women—is barely concealed. A modest increase to our state’s minimum wage would help lift tens of thousands of hard-working Wyoming women out of poverty. But unlike their excitement in doing whatever they can to help the flailing mining industries, state lawmakers have shown no interest in upping wages for women in the retail sector.

Who suffers as a result of Wyoming lawmakers’ insistence on supporting male-dominated industries while actively neglecting those that employ women?

The economic benefits of public investment in industries like healthcare and education are clear, as are the benefits of increasing pay for hourly retail workers.

A 2018 Department of Workforce Services study shows that by raising the state’s minimum wage to $9.50 per hour and the hourly tipped minimum to $5.50, it would reduce the state’s gender wage gap by two-thirds.

But it would also improve Wyoming’s economy overall. According to the Wyoming Women’s Foundation report, “When women work, research shows they invest 90 percent of their income back into local goods and services that benefit their families. That is a tremendous impact to local economies—and a good reason to make sure policies support labor force attachment, business development, support for entrepreneurs, and strong wages for Wyoming women.”

As the world turns increasingly away from fossil fuels, Wyoming lawmakers must eventually realize that throwing money and political clout behind coal, oil, and gas is a bad investment.

Luckily, there are plenty of other sectors that could benefit from similar public investment and support, and plenty of hard-working Wyoming women to put it to good use.

Why Susan Gore might go to prison
Scroll to top
Share this ArticleLike this article? Email it to a friend!
Email sent!