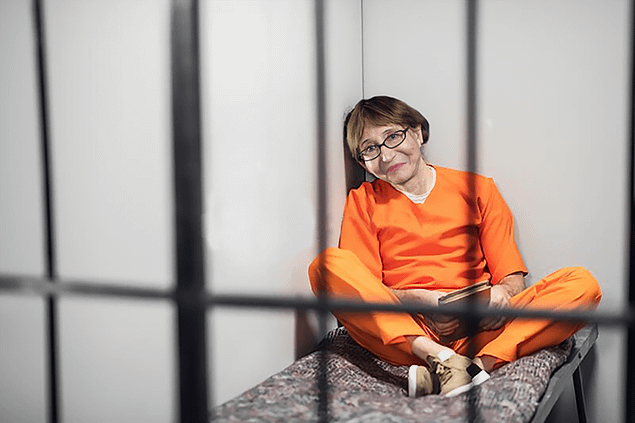 Even rich and well-connected people sometimes do time for "straw man" election crimes.

Last month, a private investigator located former British spy Richard Seddon after searching for him for three years. Seddon was living in a not-yet-completed home on the outskirts of Powell, Wyoming.

Finding Seddon in Wyoming further corroborated a June New York Times story that describes how spies trained by Seddon targeted political groups and individuals in Wyoming and Colorado over the course of a yearslong project. The targets included Better Wyoming, as well as the Wyoming Democratic Party and both Democratic and moderate Republican lawmakers.

An affidavit provided to a district court in Michigan describes how Seddon concealed his identity and whereabouts, registering his vehicles to an anonymous LLC, registering his home in the name of a property trust, and using phones not associated with his name in order to keep himself out of public records.

“Mr. Seddon has taken extreme measures to hide his identity and location and keep his public records ‘footprint’ secret,” the affidavit states. [Read the affidavit]

Seddon had been hiding, in part, in an effort to dodge subpoenas related to lawsuits against Project Veritas, his former employer. According to the New York Times and the affidavit, Seddon trained spies on behalf of Project Veritas for multiple operations. His trainees included Beau Maier and Sofia LaRocca, the principal spies for the Wyoming job.

The private investigator who located Seddon was hired by the American Federation of Teachers – Michigan to serve Seddon a subpoena related to a lawsuit the teacher’s union filed against Project Veritas.

Seddon’s forthcoming deposition under oath in the case between AFT Michigan and Project Veritas will provide information on his spy training program. It could also shed light for investigators on his activities in Wyoming.

After several weeks, Gore issued a bizarre statement describing the New York Times article as a “hit piece” and the story itself as a “nothingburger.” She did not deny any specific allegations related to the spy operation.

Unfortunately for Gore, this “nothingburger” might be served with a side of prison time, since the spy operation she funded apparently involved serious campaign finance crimes.

The spies paid by Gore gained influence by donating money to their targets. In May and June 2020, for instance, Maier made two donations of $1,000 each to Better Wyoming as he worked to infiltrate the group.

All of these gifts, it seems, were made by Maier and LaRocca, but with Gore’s money.

There are not many laws restricting donations to nonprofits like Better Wyoming. The same is not true for donations to political candidates and parties.

One campaign finance law that tends to be rather seriously enforced prohibits an individual from making a political donation with another person’s money, or on another person’s behalf. If Gore gave money to the spies so that they could make political donations, that’s illegal. So-called “straw man” donations have been the subject of numerous federal investigations, some of which resulted in prison time.

In their work targeting politicians, Maier and his now-wife, Sofia LaRocca, made hefty political contributions to parties and candidates. They gave $10,000 each to the Democratic National Committee, which bought them seats at the party’s 2020 presidential debate in Las Vegas. Maier donated $6,000 to the Wyoming Democratic Party and $1,250 to the re-election campaign of Colorado Secretary of State Jena Griswold. The couple gave $2,000 to then-U.S. Sen. candidate Mark Kelly of Arizona.

All of these gifts, it seems—totaling nearly $30,000—were made by Maier and LaRocca, but with Gore’s money.

The law against “straw man” donations exists because there are limits on how much any individual can contribute to political campaigns. For example, a person can donate no more than $2,900 per election to a federal candidate for president, the U.S. Senate, or U.S. House during the 2021-22 election cycle.

If a person hits that $2,900 limit and decides they want to provide a candidate even more money, “straw man” laws prevent them from giving money to their friends to make additional donations under the friends’ names.

Penalties can be stiff for people convicted of breaking these laws, even for the wealthy and well-connected.

In 2012, conservative political commentator, author, and filmmaker Dinesh D’Souza was convicted for reimbursing others $20,000 for donations to a 2012 U.S. Senate candidate in New York. He pleaded guilty and was sentenced to eight months in a halfway house, five years’ probation, and a $30,000 fine.

Washington, D.C., businessman Jeffrey E. Thompson was sentenced in 2016 to three months in prison, three years’ probation, and a $10,000 fine for illegal funding through straw donors to several candidates, including Hillary Clinton.

In a current high-profile case, the Department of Justice is investigating Postmaster General Louis DeJoy for alleged straw donations he made via former employees who worked for him when he was in the private sector. The individuals told investigators they were paid back in the form of bonuses for contributions they made at DeJoy’s behest.

The U.S. Supreme Court has typically held that transparent political spending is important because it informs voters, decreases corruption, and prevents people from circumventing the law. Voters should know who is trying to influence them, the notion goes. This is despite rulings by the Court like Citizens United that allow massive amounts of dark money to fund political campaigns.

For her part, Gore has long supported less transparency and regulation in political spending. The Wyoming Liberty Group has filed friend of the court briefs in cases where wealthy and prominent donors are accused of shady contributions. In 2015, she launched the Pillar of Law Institute, a national arm of the Wyoming Liberty Group aimed at fighting campaign finance regulations nationwide.

According to its website, the Pillar of Law has three people on staff: Susan Gore, along with longtime Wyoming Liberty Group attorney Steven Klein and his regular partner, Benjamin Barr.

According to Barr’s website, he is the “lead architect for Project Veritas’ undercover operations.” Klein regularly represents Project Veritas, including in the lawsuit involving AFT Michigan.

Depending on how investigations into Gore’s campaign spending proceed in the spy case, Klein might be representing her in the future, as well.

What Mike Enzi’s death says about Wyoming’s healthcare system
Scroll to top
Share this ArticleLike this article? Email it to a friend!
Email sent!