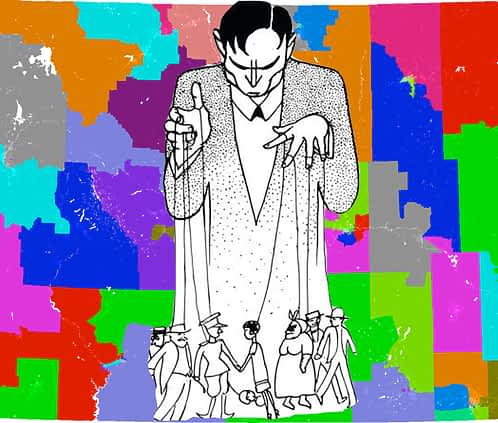 Legislators might cast the votes when it comes to redrawing Wyoming's voter district lines. But county clerks pull the strings.

Wyoming’s once-in-a-decade election redistricting process is under way! But the folks running the show aren’t who you might think.

Over the next six months, state legislators will use new U.S. Census data to redraw voting district boundaries and shift Wyoming’s electoral landscape.

The process will culminate in February, when the Wyoming Legislature finalizes a new election district map during its 2022 budget session.

Between now and then, plenty of jockeying will take place as politicians, political parties, and other actors attempt to influence the process in their favor. There’s lots at stake.

While state legislators have the final say on what the new voting map looks like, another much more obscure group of elected officials holds sway over the entire affair: county clerks.

Any person who wants to make their voice heard in the redistricting process should turn first to their local county clerk.

County clerks oversee elections. In each of Wyoming’s 23 counties, the clerk is responsible for printing and distributing ballots, setting up polling places, and other on-the-ground voting-related duties. They hold deep local knowledge about voting and voters in their communities.

So it makes sense that state legislators rely heavily on county clerks as they decide where to draw the new voting district lines. The clerks are effectively the behind-the-scenes experts that guide redistricting in Wyoming.

One such event is taking place next Tuesday, Sept. 14, in Albany County. Check with your local county clerk’s office to see when they are holding a redistricting information session near you.

Much of the redistricting conversation between county clerks and state legislators is wonky, boring, and outside your average Joe’s scope of expertise.

But one big, important aspect is not: the question of what makes a “community of interest.”

Ideally, voting districts group people according to their similarities, rather than splitting groups of similar people apart or lumping disparate people together. That way, the voters of a single district can elect someone they feel really represents them.

Lawmakers create this ideal situation when they draw voter districts around self-described “communities of interest.”

A “community of interest” is, essentially, a collection of people that identifies as a distinct community. That might be the people of a single town or county, a specific part of a city, people who live near a particular geographic feature, or who associate along the lines of race, religion, or culture.

So, it’s vague. But the important thing is that the people who live in a “community of interest” by-and-large identify as part of that group.

“A community of interest is anything that a community comes up with and says, ‘We want our own legislator, or we want the lines drawn this way to best represent who we feel we are,’” Rep. Dan Zwonitzer (R-Cheyenne) told a recent online forum about redistricting.

How will politicians know who identifies as a group and who does not? The people of Wyoming need to tell them. That is perhaps the most critical reason residents should participate in the redistricting process.

And, again, what’s the best way to participate? Start by contacting your county clerk to find out what’s going on in your neck of Wyoming.

A state of many communities

“Communities of interest” look different depending on where you’re at in Wyoming.

In Cheyenne, the largely Latino south side recently proclaimed that it is its own community of interest when it petitioned the local school board for its own dedicated seat.

That conversation took place outside the redistricting process, but it is a clear example of a community self-identifying for political representation.

Albany County Clerk Jackie Gonzales said she does not begin the redistricting process by assuming that certain “communities of interest” preexist.

“I don’t parse out a certain area,” she told Better Wyoming. “I think we have to be open and engaged by all of the people who are served by our representatives.”

But within Albany County are some pretty clear distinct communities. For example, a neighborhood in Laramie that largely includes University of Wyoming faculty, students, and staff is plainly different from the rural areas on the outskirts of town and outside city limits. Those parts of town currently exist in separate voting districts.

Smaller towns could be “gobbled up” by larger population centers they have nothing in common with.

Drawing district lines so that people in rural parts of the state can vote together is a regular issue in Wyoming redistricting.

Converse County Clerk Karen Rimmer warned the Legislature’s Joint Corporations Committee recently that smaller towns in her county—such as Glenrock, Rolling Hills and Lost Springs—could be “gobbled up” by larger population centers they have nothing in common with.

In Fremont County, a major consideration for Clerk Julie Freese is the Wind River Reservation. The federal Voting Rights Act requires that Native American citizens have their own representation, so one House district includes the Wind River Indian Reservation and small portions of Lander and Riverton.

Currently, House District 54 is occupied by Andi Clifford (D-Riverton), an enrolled member of the Arapaho tribe.

Create your own deal

At its most recent meeting, the Joint Corporations Committee came up with a proposed map to guide the first steps of the new redistricting process, which divides Wyoming into 10 regions.

Laramie, Natrona, Fremont, and Albany counties are each a “region,” because they have enough residents to easily divide them into House and Senate districts.

Many rural counties with far fewer residents would be lumped together to create other regions. The proposed East-Central region would include Converse, Goshen, Niobrara and Platte counties.

After the committee passed its tentative 10-region plan, Sen. Ogden Driskill (R-Devils Tower) laid out the predictable next steps.

“We’ll hand it to county clerks to redefine these districts for House and Senate seats,” Driskill said. “There will be more meetings on the local level to create your own deal.”

Check with your local county clerk to find out when you can get together and help them “create your own deal.”

Ten FACTS about Wyoming’s Medicaid coverage gap
Scroll to top
Share this ArticleLike this article? Email it to a friend!
Email sent!