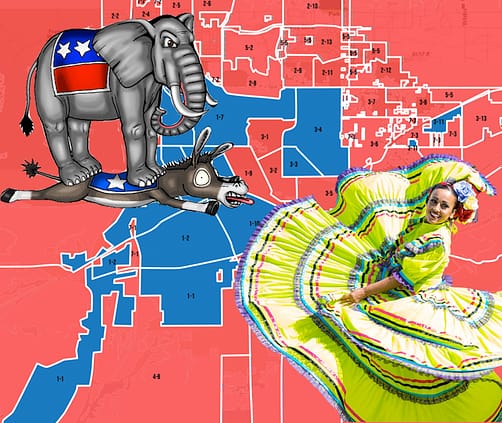 Cheyenne is gerrymandered along partisan and racial lines.

Laramie County has 15 state lawmakers in the Wyoming Legislature, and all of them are Republicans.

Isn’t it strange that Wyoming’s most populous and diverse county has no Democratic representation? You’d think there might be at least some Democrats living there, right?

Of course, Wyoming is a GOP stronghold—statewide, Donald Trump won nearly 70 percent of the presidential vote here in 2020.

But at the same time, 79 out of 90 members of the Wyoming Legislature are Republican. That’s nearly 90 percent.

What accounts for this 20 percent difference? The answer is sadly simple: gerrymandering.

The Wyoming Legislature is in charge of drawing voter district lines, and the Republican supermajority slices and dices the state’s population to ensure they keep as much political power as possible.

Cheyenne provides a clear example of how this works. [CHECK OUT THE VIDEO FOR A VISUAL EXPLANATION]

Voter data shows that, in fact, there are lots of Democrats in Cheyenne, along with Democratic-voting Independents. Most of them live in the central part of the city.

Lawmakers could easily draw legislative voting districts to align with these “communities of interest” and, in doing so, create a Laramie County delegation that better represents its constituents.

Instead, power-hungry Republican lawmakers have split up this blue bloc of voters between five separate House districts, nullifying their influence in a brazen act of partisan gerrymandering.

As a result, they’ve ensured that Cheyenne residents who aren’t Republicans don’t have a voice at the capitol.

Republican lawmakers have split up this blue bloc of voters between five separate House districts.

The Wyoming Legislature is currently going through the once-in-a-decade process of “redistricting,” redrawing the state’s voting district lines to account for population shifts reflected in the U.S. Census.

Redistricting will culminate during the Legislature’s 2022 budget session in February.

In the meantime, Wyoming voters will need to make clear to their elected officials that fairness and accurate representation should be the principles that guide the redistricting process—not the desire to seize as much power as possible.

Lawmakers can start by fixing Cheyenne.

In order to see how badly Cheyenne’s legislative districts are gerrymandered, one must look a layer deeper into the state’s voter data.

Each Wyoming legislative district is made up of “voter precincts,” smaller geographic areas that typically cover a neighborhood or two and have their own polling place or vote center.

When county clerks tally votes on Election Day, they add together the totals from each precinct to determine who won.

Better Wyoming used precinct-level voting data to create a map showing that, in fact, a large number of precincts in the middle of Cheyenne vote Democrat.

For instance, Wyoming House District 41, in northeast Cheyenne, has eight separate voter precincts. In 2018, Republican candidate Bill Henderson beat his Democratic challenger, Sean Casteneda, by a slim margin in that district: 1,552 votes to 1,507. Precinct-level voting data shows that Henderson and Casteneda each won four of the district’s eight precincts—an even split.

Better Wyoming used precinct-level data from the Wyoming Secretary of State’s website to examine races like this and create a map of Cheyenne based on the 2018 election results (which are similar to 2016 and 2020’s results). They show that, in fact, a large number of precincts in the middle of Cheyenne vote Democrat.

But because these Democratic precincts are lumped together with larger Republican precincts—including more conservative rural Laramie County—they never amount to enough votes in a single district to win.

There are three Republican voters for every Democrat in all of Laramie County, and about 15 percent of voters are registered Independent.

So, even if voter lines were drawn to more accurately represent the people, Republicans would still hold the majority of the county’s five state Senate and 10 state House seats.

But they wouldn’t have all of them, particularly not in the more urban parts of Cheyenne.

Cheyenne is not only gerrymandered around party lines, but along racial lines, too.

According to the 2020 U.S. Census, roughly 15 percent of Laramie County is Latino. The vast majority of these folks live in a cluster of Cheyenne neighborhoods south of Interstate 80.

The Voting Rights Act of 1965 holds that “communities of interest” defined by race should have their own representation whenever possible. Several U.S. Supreme Court cases have affirmed this.

As a bloc, south Cheyenne is easily big enough to have two of its own House seats and a single Senate seat.

As it is now, however, the Latino community in south Cheyenne is split into no fewer than four House districts and two Senate districts, each of which includes a large swath of rural, white Laramie county.

Neither of the Wyoming State Senators who today represent south Cheyenne live there.

So, instead of having their own legislators to reflect their interests, the votes of Cheyenne’s Latino community are cancelled in a similar way as the Democrats’ in the rest of Cheyenne.

However, Cheyenne’s south side residents have become acutely aware of this problem, and they’ve begun to fight for their own representation.

Last year, south Cheyenne residents organized to change how trustees are elected to Laramie County School District #1 board, which has historically lacked Latino representation. They won, and in 2022 the south side will have its own school board member for the first time.

Now, the same people who won that fight are turning to the Legislature to demand representation there, as well.

South side residents led by the Wyoming Independent Citizens Coalition showed up at a redistricting work session organized by Laramie County officials last month. They told sitting lawmakers Rep. Dan Zwonitzer (R-Cheyenne) and Sen. Tara Nethercott (R-Cheyenne), among others, that they want legislators who look like them and understand their concerns.

As the redistricting process continues, these advocates could very well help pressure lawmakers to fix racial gerrymandering in Cheyenne. This would be a step in the right direction toward more fair and accurate representation in Laramie County overall.

Gordon’s proposed budget will keep Wyoming shackled to the fossil fuel in...
Scroll to top
Share this ArticleLike this article? Email it to a friend!
Email sent!