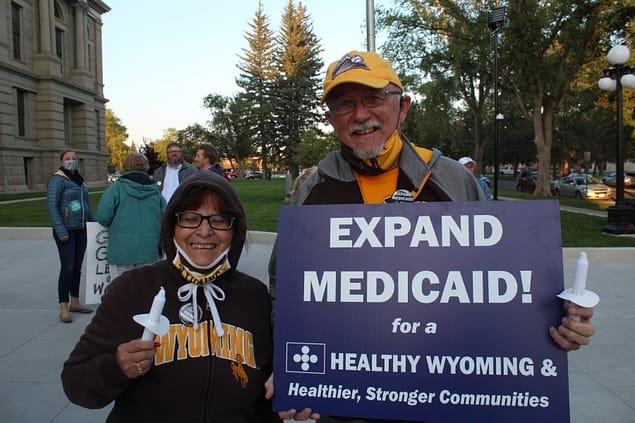 Attendees of a Healthy Wyoming vigil in Cheyenne last fall.

As the Wyoming Legislature’s 2022 session draws near, advocates for affordable healthcare access are once again looking to lawmakers to expand the state’s Medicaid program.

Last year, a bill to expand Wyoming Medicaid passed the state House for the first time in history. Lawmakers had encouragement from a nascent grassroots movement and financial incentive from the federal government.

But a Senate committee narrowly voted the bill down.

The grassroots movement, under the banner Healthy Wyoming, has grown in the year since. The group has developed local chapters in communities across Wyoming and hosted several high-profile actions, including a series of statewide vigils in September featuring faith leaders.

According to a poll by the American Cancer Society, Medicaid expansion is more popular among Wyoming residents than ever. Two-thirds of voters across party lines support it.

Meanwhile, the financial incentive for Wyoming to expand Medicaid remains under the American Rescue Plan Act. In addition to covering 90 percent of the ongoing cost of expanding the program, federal funds would completely cover the state’s portion of the program cost for the first two years and provide a $34 million bonus on top of that.

However, obstacles remain. The 2022 legislative session is a “budget session,” which means procedural rules will make non-budget bills more difficult to consider.

In addition to the budget, lawmakers this year will also finalize a new map of the state’s voting districts—a process called “redistricting” that, to date, has been contentious and chaotic—which will further occupy the Legislature’s limited time and attention.

Nevertheless, in the past several years Medicaid expansion has gone from an issue ignored in Wyoming by all but the most liberal lawmakers to one that has gained support from prominent Republicans in and out of the Legislature.

Whether or not a bill to expand Medicaid passes this year, it is clear that advocates for affordable healthcare access have momentum.

The Wyoming Legislature has among the shortest sessions of any such body in the nation. Its “general sessions” are just 40 working days, and its “budget sessions” only last 20 days.

The upcoming 2022 session beginning on Feb. 14 is a budget session. It will last until mid-March. During that time, lawmakers will have to agree on the state’s next two-year budget to fund state agencies, and they must complete the “redistricting” process.

In addition, hundreds of bills have been proposed by legislative committees and individual lawmakers. A bill to expand Medicaid, the Medical Treatment Opportunity Act, is among them. It largely mirrors last year’s bill.

In order to proceed during a “budget session,” a bill must clear a peculiar hurdle—an “introduction vote” that requires two-thirds approval in either the House or Senate. This rule is meant to limit the number of non-budget bills considered during a budget session. It does not apply during the Legislature’s “general sessions.”

Last year’s bill to expand Medicaid passed the House 32 – 28. Eight more House members must vote for this year’s bill on introduction in order for it to proceed at all.

The Medical Treatment Opportunity Act will begin in the House, so it must receive an affirmative vote from 40 of the chamber’s 60 members to be introduced.

Last year’s bill to expand Medicaid passed the House with a 32 – 28 vote. That means an additional eight House members must signal support for this year’s bill in order for it to proceed at all.

It is not uncommon for legislators who are uncertain about where they stand on a bill to vote “aye” on the introduction vote during a budget session, simply to have the opportunity for more deliberation.

Unlike last year’s Medicaid expansion bill, which was sponsored by an individual lawmaker, freshman Rep. John Romero Martinez (R-Cheyenne), this year’s bill is sponsored by the Legislature’s Joint Revenue Committee.

Bills sponsored by committees often gain more support than bills sponsored by individual lawmakers, but that is not always the case. A Medicaid expansion bill sponsored by the Joint Revenue Committee failed to pass introduction during the Legislature’s 2020 budget session.

Rally at the capitol

Advocates for healthcare access will be at the capitol in full force on Valentine’s Day, the start of the 2022 legislative session.

Healthy Wyoming is hosting a rally from 12:30 – 1:30 p.m. on Feb. 14, which will feature speakers and provide attendees the opportunity to show their support to lawmakers in person.

The event will take place on the capitol steps, which will allow people to safely gather despite the uptick in COVID-19 transmission.

Anyone interested will be able to go inside the capitol and witness the Legislature’s proceedings from the galleries or speak to lawmakers in the lobbies.

You can receive email updates about the rally and other actions by signing up at Healthy Wyoming’s website.

Proposed election map would force 16 Wyo. legislators into runoffs
Scroll to top
Share this ArticleLike this article? Email it to a friend!
Email sent!