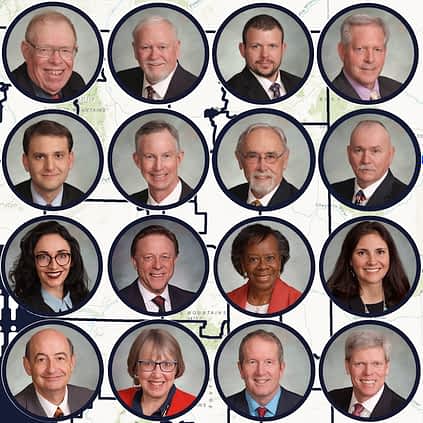 These incumbents will all have to run against their colleagues if the proposed map becomes law.

The Wyoming Legislature’s Corporations Committee threw out a map last week that was rife with political gerrymandering and gave outsized influence to rural legislators.

They replaced it with a new, far better map that adds two House seats and one Senate seat. So, under the proposed map, the Wyoming House would have 62 members and the Senate 31.

The new map’s legislative district lines stick more closely to county lines and other commonsense boundaries, and they better represent communities of interest, such as the Latino population of Southside Cheyenne.

The committee will workshop this current map one more time, on Feb. 11, before taking it to the full Legislature at its budget session, which starts Feb. 14.

The current map backed by the Corporations Committee will force runoffs between some sitting lawmakers, which is a positive move. This indicates that the map’s district lines are drawn according to the principles of fair and accurate representation, rather than to protect politicians.

Examples from years past reveal wild instances of gerrymandering just so two lawmakers can both stay safely in their seats.

But, historically, sitting Wyoming legislators who might be forced to run against each other have fought against such scenarios during the “redistricting” process.

Examples from years past reveal wild instances of gerrymandering just so two lawmakers can both stay safely in their seats.

We look forward to seeing which Wyoming lawmakers will come forward in the next few weeks to ask the committee and the Legislature to draw squiggly lines around their homes to help them avoid a runoff during the 2022 elections.

It’s been 10 years since the Legislature last redrew Wyoming’s voting district lines. Populations have shifted, which requires district lines to change, and some sitting lawmakers find themselves living near each other but in different districts.

The map that the Corporations Committee had been working with until last week included lots of squiggly lines drawn around the homes of sitting legislators in order to keep them in different districts and prevent them from running against each other.

The Corporations Committee’s new proposed map, however, draws lines that put a number of sitting Wyoming legislators in the same districts, forcing showdowns.

Sixteen lawmakers will have to face off against other legislators if the committee’s current map is passed into law—14 Republicans and two Democrats.

Here are some highlights:

Rep. Chuck Gray lives on the eastern edge of what is currently House District 57. Under the new configuration, he will be in the same district as Rep. Joe MacGuire, who represents HD-35.

If both lawmakers want to continue serving in the Legislature past 2022, they will have to run against each other if this map becomes law.

Sen. Tom James lives in what is currently Senate District 13, which encompasses much of Green River and also includes the small part of Rock Springs where James lives.

Sen. John Kolb lives in Rock Springs, too, not too far from James. The new proposed Senate district would be more centrally oriented to the town of Rock Springs, and would include both James’ and Kolb’s homes.

Since Kolb is not up for re-election until 2024, the Legislature might decide that he does not have to run in 2022 to protect his seat, which would simply remove James from the Senate.

Sen. Charles Scott, the longest-serving member in the history of the Legislature, has represented SD-30 since 1983. The new map puts him in the same district as Sen. Jim Anderson, who lives in the southwestern tip of SD-28.

Even though the current district Anderson serves looks gerrymandered to include his home, he was actually elected in 2012, after the last redistricting process.

Not surprisingly, Scott, a member of the Corporations Committee, voted against the proposed plan, since it would force him to run against Anderson.

Two other proposed new districts in the committee’s map actually include three incumbents.

Elsewhere in Casper, Republican Representatives Steve Harshman, Jerry Obermueller, and Tom Walters would all live in the same new district.

In Cheyenne, Republican Senators Affie Ellis, Lynn Hutchings, and Stephan Pappas would all vie for a single seat under the new map.

The Corporations Committee’s previous map drew squiggly lines around the homes of GOP Reps. Jim Blackburn and Clarence Styvar in Cheyenne to keep them from having to run against each other. But the new proposed map puts them in the same district. They will have to face off in a primary if they want to stay in the Legislature.

Two Democratic incumbents, Reps. Cathy Connolly and Karlee Provenza, both live in what would be Laramie’s new House District 45 and would have to run against each other.

The ghosts of gerrymandering past

One egregious example of gerrymandering from the most recent “redistricting” process shows how drawing district lines to protect sitting lawmakers can have far-reaching consequences.

In 2012,, the Corporations Committee’s proposed map put Sens. Curt Meier of LaGrange and Wayne Johnson of Cheyenne in the same district. Because most residents lived in Cheyenne, Meier’s re-election chances looked bleak.

So, Meier—who is now the state treasurer—made sure that wouldn’t happen. He successfully offered an amendment during the 2012 budget session that protected his own seat, using prisoners in Torrington’s medium security prison to shift the population balance.

Meier’s move is the sole reason why Senate District 6—which includes part of north Cheyenne and eastern Laramie County—snakes up the eastern border in a narrow, 17-mile strip to Goshen County.

The district under Meier’s amendment captured 500 inmates in Torrington’s medium-security prison—who, by the way, cannot vote—giving SD-6 just enough population to keep it from swallowing up Meier’s residence.

This gerrymandering has affected other elections beyond keeping a Johnson-Meier race from happening.

In the 2016 GOP primary, newcomer Anthony Bouchard and Rep. Dave Zwonitzer squared off in SD-6 after Johnson retired. Zwonitzer won by 48 votes in Laramie County.

But in that small swath of Goshen County that Meier added to protect his seat, Bouchard outpolled Zwonitzer, 66-13, making Bouchard the winner by five votes.

Thanks to this one act of gerrymandering, Sen. Meier saved his seat and went on to become Wyoming State Treasurer, and we were gifted with Anthony Bouchard’s presence in the Legislature.

We, The Government, are Wasteful, Fraudulent, and Abusive: Therefore we must...
Scroll to top
Share this ArticleLike this article? Email it to a friend!
Email sent!