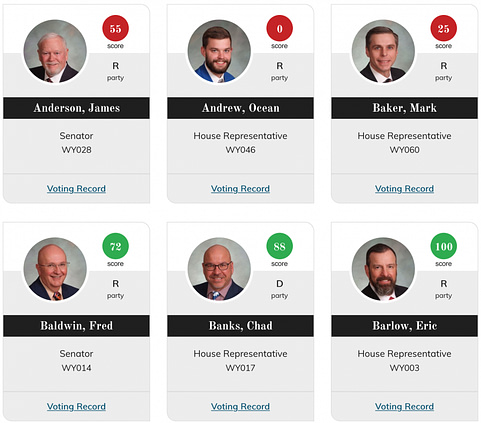 Do your local legislators make the grade?

If the Wyoming Legislature operated like a school, half of its 90 members would have been held back due to their failing performances in 2021.

That’s according to a new “Report Card” created by the Wyoming Education Association, which tracks lawmakers’ votes on key public school issues.

The legislative scorecard cross-references bills that are important to Wyoming K-12 education with legislators’ votes, and then scores the lawmakers accordingly.

The tracker works in real time, so you will be able to follow along as 2021’s flunkies attempt to redeem themselves (or not) with better votes in 2022.

“We wanted a mechanism to provide legislative transparency and accountability on education issues, for both our members and the public,” said Tate Mullen, WEA government relations director. “This platform is used by many education associations throughout the country, and we’re very pleased with the results so far.”

Of course, the scorecard will also be available during election time. Voters who care about education will be able to research how much or how little the incumbents in their legislative district support Wyoming public schools.

Who makes the grade?

Everyone knows that teachers play a huge role in Wyoming education. But fewer think about the impact of Wyoming legislators on what, how, and how well their children learn.

The WEA’s 2022 scorecard is tracking nearly 40 bills during the current legislative session, from the state budget to such issues as scholarship programs, vaccine requirements, juvenile justice data reporting, and bans on teaching critical race theory.

Legislators earn points for sponsoring or voting for a bill that the WEA favors, and lose points for supporting legislation that the organization officially opposes.

Everyone knows that teachers play a huge role in Wyoming education. But fewer think about the impact of Wyoming legislators on what, how, and how well their children learn.

Points are tallied for each vote as bills progress, with the highest priority legislation worth more points in the grading system.

Mullen said there were no surprises among the perfect performers and those near the top, as they have consistently shown their support for education during their time in the Legislature.

Likewise, he said the lawmakers at the bottom of the rankings have been consistent, too.

Eleven legislators received absolute zeroes, including former Congressional candidate Rep. Chuck Gray (R-Casper), who was recently appointed to the Legislature’s Management Council, and several of his colleagues in the so-called House “Freedom Caucus.”

Five lawmakers didn’t make it out of single digits, including current Congressional candidate Sen. Anthony Bouchard (R-Cheyenne) and three of his colleagues in the Wyoming Senate, which has in recent years been much more hostile to Wyoming public education than the House.

Overall, 45 legislators received 60 points or less, giving them a failing grade for the year.

Some are already doing much better this year in the eyes of the WEA.

For instance, Rep. Ocean Andrew (R-Jelm), a member of the House Education Committee, scored a zero in 2021. But his score has increased in just the first week of the 2022 budget session, thanks to his education-positive votes on issues such as the Hathaway Scholarship and public school district reserves.

Mullen said one of the goals of the scorecard is to provide a clear source about what a bill does and why the WEA has taken its position.

For example, for HB 20-Medical opportunity treatment act, which would expand the state’s Medicaid program, the scorecard notes the impact it would have on students and families:

“Medicaid expansion will help provide access to families and single parent homes. Children miss school when family members are sick, either due to transportation or to help take care of the home in rural areas. Medicaid expansion will help to ensure healthy families and students don’t miss school, which has a significant positive impact on their student performance.”

The WEA strongly opposes SF 62-Civics Transparency Act, calling it “legislative overreach” that “will overburden classroom educators with additional lessons in the name of transparency… It proposes to by-pass the social studies standards setting and review process by legislating standards.”

Another benefit of the scorecard, Mullen said, is that it can be used by the organization when it decides what candidates to endorse in the next election cycle.

Don’t wait until then to find out where your local lawmakers score in the eyes of the WEA. Check out the vote tracker today.

Bill advances to limit voting in Wyoming primary elections
Scroll to top
Share this ArticleLike this article? Email it to a friend!
Email sent!