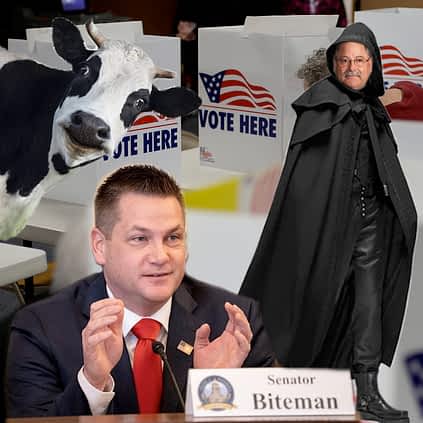 If party-switching voters are "cheating to win," what do you call these shady tactics?

As most Wyomingites were finishing dinner and getting ready for bed Wednesday night, the Wyoming Senate was busy at work on a bill to restrict elections.

The capitol was all but empty at 8:30 p.m. as lawmakers advanced Senate File 97, “Change in party affiliation” on first reading. The bill would block anyone from voting in a Wyoming primary election unless they were registered months in advance.

For decades, Wyoming residents have been able to register or change their voter status on the same day they cast their ballots.

The bill, sponsored by Sen. Bo Biteman (R-Ranchester), passed second reading on Thursday afternoon. It must clear one more reading in the Senate before moving to the House.

When it comes to bills that restrict voting, the Wyoming Senate’s work under the cloak of darkness is fairly typical.

Half a dozen bills to block voters from primaries—unless the voter fulfills some new qualification or another—have been proposed and defeated in the Wyoming Legislature since 2019.

That year, lawmakers killed bills of this nature four times during a single legislative session. After each died, another would emerge, prompting critics to refer to them as “zombie bills.”

Legislative leadership kept allowing the bills to return under pressure from the Wyoming Republican Party and billionaire Foster Friess, who blamed party-swapping Democrats for his 2018 Wyoming gubernatorial loss to Mark Gordon in the GOP primary.

Bill gets moooo-ved to the Agriculture Committee

Before SF-97 could be debated on the Senate floor in the dark of night, it had to be approved by a Senate committee.

The Senate Corporations, Elections, and Political Subdivisions Committee is the body that normally considers bills related to elections and voting. Duh. That’s where SF-97 was initially assigned.

So, on Monday morning, SF-97’s co-sponsor Ogden Driskill (R-Devil’s Tower) made a motion to have the bill re-assigned to the Senate Agriculture Committee.

The Senate Ag Committee specializes in farming, ranching, and rubber-stamping controversial bills that Senate leadership wants to advance without much fuss. Three of SF-97’s co-sponsors serve on it.

Re-assigning a bill to a different committee requires a majority vote by the entire Senate. Initially, Senators rejected Driskill’s motion, 13 – 17.

But after some lunch-hour horse trading and cattle swapping, Driskill brought the motion up again on Monday afternoon, and it passed.

The Senate acknowledged that, to Wyoming politicians, voters are basically livestock.

The Senate Agriculture Committee considered SF-97 on Tuesday evening. The committee advanced the bill with a 5 – 0 vote, but not without pushback from the public.

“‘To secure our rights, governments are instituted among men, deriving their just powers from the consent of the governed.’” Bellini said. “Preventing people from exercising their right to vote is taking away their consent.”

She said that SF-97 would reduce the number of people participating in elections, which flies in the face of the values upon which this country was founded.

Gary Coles, a lifelong Republican from Uinta County, said he had considered switching parties once or twice to vote for good candidates of the opposite party in local elections, but thankfully he hadn’t needed to—it turned out they were unopposed in their primaries.

The Vietnam Veteran said preserving the right to vote is a fundamental American value.

“I care about this country, I care about the right to vote,” Coles said. “Anything that restricts that right in the least hurts me. I really think this is a step in the wrong direction.”

Neither the Wyoming County Clerks Association nor the Wyoming Secretary of State’s office took an official position on SF-97, but both expressed concerns to the Senate Agriculture Committee on Tuesday.

Mary Lankford of the Wyoming County Clerks Association said changing the voter registration process will require a major public education effort that will not reach everyone.

“We’re concerned that they’re going to get disenfranchised.”

Many unaffiliated voters, in particular, don’t decide what party to join until close to the primary, she said. “We’re concerned that they’re going to get disenfranchised.”

Lankford also questioned whether it was appropriate for the proposed law to go into effect in advance of the 2022 election, which is for their purposes right around the corner.

Likewise, Kai Schon of the Wyoming Secretary of State’s Office, said there was no way the digital changes to the election system could be made until 2023, so clerks would have to enact this law manually for the time being, whatever that looks like.

During debate Wednesday night, SF-97’s sponsor, Sen. Biteman, claimed that the only effect his bill would have would be to keep people from “cheating” as they switch from one party to another and back.

“They only want to influence the outcome of that election to pick the opponent they prefer to face in the general election,” he said. “That is wrong. Our votes should not be canceled out by people who just want to game the system.”

But of course it would have other consequences.

Sen. Charlie Scott (R-Casper) has consistently opposed bills to block people from switching their registration at the polls, in part because many people in his district are unaffiliated but nevertheless deserve a voice.

“If this bill passes, a lot of my constituents are going to be mad, with good cause,” Scott said. “This is a bad bill designed to suppress the right to vote in the election that really counts in Wyoming.”

Procedural hurdles and political calculations help trip up Wyoming Medicaid...
Scroll to top
Share this ArticleLike this article? Email it to a friend!
Email sent!