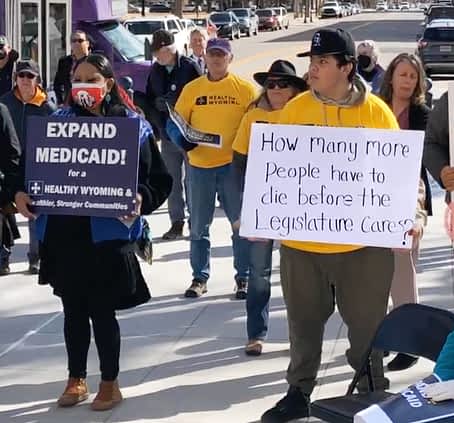 While Wyoming legislators wring their hands and worry about reelection, 25,000 Wyoming residents lack any reasonable access to affordable healthcare.

Medicaid expansion was an issue many Wyoming lawmakers preferred to avoid this year, despite the fact two-thirds of eligible voters across party lines support it.

Ultimately, political calculations and legislative procedures proved just as vexing as outright opposition when it came to the effort to extend basic healthcare access to 24,000 uninsured Wyomingites.

The Wyoming House twice refused to consider Medicaid expansion during the 2022 session, and the Senate finally killed it.

During the session’s first week, House leadership held back House Bill 20, “Medical treatment opportunity act,” after failing to muster to the two-thirds majority it needed to pass an introduction vote during a “budget session.”

On Friday, the House balked again, choosing not to debate an amendment to the state budget that would have expanded the healthcare program.

An identical budget amendment came before the Senate on Friday, as well. That chamber chose to debate it, but having no clear path forward, even lawmakers who have co-sponsored bills in the past to expand Medicaid voted “no.”

The issue is decided for this year’s legislative session, while advocates for healthcare access look toward the 2022 elections.

During a budget session, however, bills must pass an “introduction vote” with a two-thirds majority to be considered. This rule does not apply during “general sessions” of the Legislature, like in 2021.

This year, House leadership, which nearly unanimously supports Medicaid expansion, tallied votes in their chamber and discovered that, despite advancing a bill last year, they lacked a two-thirds majority for HB-20 to pass an introduction vote.

So, they opted for a “Plan B”: passing Medicaid expansion via the budget, which only requires a simple majority.

This would be an unorthodox—though nowhere near unheard of—way to change state law.

Many legislators, in private, expressed fears that supporting Medicaid expansion would make them vulnerable to right-wing primary challenges.

When the proposed amendment came before the House, however, opponents of Medicaid expansion challenged whether the Legislature’s rules allowed them to include the policy in the state budget.

After a debate, the House voted that their rules did not allow it, and the amendment was defeated.

Some legislators who had voted “aye” on last year’s Medicaid expansion bill argued on procedural grounds against enacting it via a budget amendment.

But some “no” votes were likely motivated by political calculation, rather than procedural concern.

Many legislators, in private, expressed fears that supporting Medicaid expansion would make them vulnerable to right-wing primary challenges in the upcoming 2022 election.

Unlike the House, the Senate chose to debate an amendment to the budget that would have expanded Medicaid, despite a similar rules objection.

The back-and-forth followed predictable patterns, despite the fact that a proposal to expand Medicaid had not made it to the floor of the Wyoming Senate in years.

Advocates such as Sen. Cale Case (R-Lander), who sponsored the budget amendment, noted that the Wyoming Department of Health estimates Medicaid expansion would provide access to basic healthcare for between 19,000 – 24,000 uninsured Wyomingites.

Case described how, at one point, he was among this population. In 2012, while unemployed, he was diagnosed with Stage 3 skin cancer. He recovered, but his treatment did not start until he was able to obtain insurance through his wife’s plan.

“Can you imagine facing a chronic disease without any hope, and the only way you manage it is you go to the emergency room once in a while?” Case asked. “That’s terrible. Wyoming is better than that.”

Sen. Chris Rothfuss (D-Laramie) touted Medicaid expansion’s financial benefits. Thanks to incentives in the American Rescue Plan Act passed by the U.S. Congress last year, Wyoming’s share of the cost of expanding Medicaid would be completely covered for two years, and the state would receive an additional $34 million for its general fund on top of that.

“You’re turning down money if you vote against this,” Rothfuss said. “And the beauty of this is that you also get to help people gain access to affordable health care.”

Two Senators, Tara Nethercott (R-Cheyenne) and R.J. Kost (R-Greybull), spoke in favor of expanding Medicaid but voted “no” on the amendment. Sen. Jeff Wasserburger (R-Gillette) initially voted “aye” but then changed his vote.

On the first day of the 2022 session, advocates for Medicaid expansion gathered under the Healthy Wyoming banner for a rally on the steps of the Wyoming capitol.

Even at that time, Sen. Case alluded to the “Plan B” strategy of a budget amendment in the instance that the House could produce a two-thirds majority for the introduction vote.

Better Wyoming director Nate Martin looked ahead one step further. He said that if the effort to pass Medicaid expansion failed in the Legislature this year, advocates would have no choice but to mobilize voters and bring about change in other ways.

“There are a lot of people in this building that the only language they understand is political power and political pressure,” Martin said.

Wyoming Senate scraps “redistricting” plan in a reckless power play
Scroll to top
Share this ArticleLike this article? Email it to a friend!
Email sent!