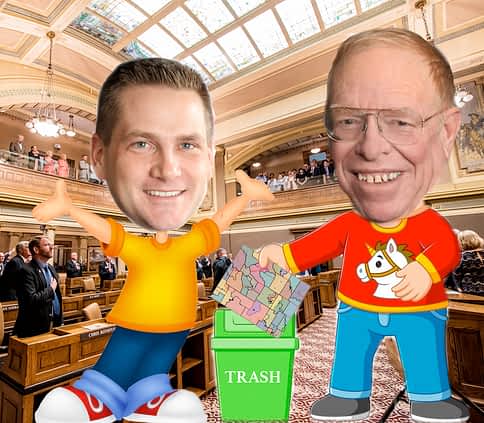 The Wyoming Senate derailed the state’s redistricting process on Tuesday morning, sending lawmakers back to Square One with just a week left in the 2022 legislative session.

Instead of amending and improving upon a  map sponsored by the Joint Corporations Committee and passed by the Wyoming House, Senators voted to completely scrap the plan and start over.

In doing so, they wiped out six months worth of work by county clerks, members of the public, and the Corporations committee, which met and deliberated a dozen times, gathering input all along, in order to produce a proposed map.

If the Senate confirms this decision with a final “third reading” vote on Thursday, it will set up a showdown with the House, which approved its version of an election district map with a  54-6 vote.

If the House and the Senate each pass their own version of a statewide map, a select group of members from each chamber will have to meet in a “conference committee” to attempt to hash out the differences.

Since the two maps are likely going to be completely different, there seems little chance the committee will reach consensus.

In this situation, the Legislature will either have to convene a special session to complete redistricting or hand the responsibility over to the Wyoming Supreme Court.

The move to completely trash the plan lawmakers have been working on for months came during “second reading” in the Senate of House Bill 100, “Redistricting of the legislature.”

Sen. Bo Biteman (R-Ranchester) proposed an amendment to delete the entire map passed by the House and replace it with a map that bears striking resemblance to a plan proposed by Sen. Charlie Scott (R-Casper) earlier in the redistricting process.

The plan that the House passed earlier in the 2022 session acknowledges the shift in Wyoming’s population over the past 10 years from rural areas to more urban areas like Cheyenne. It redraws the voting districts so that regions with more people get fair representation.

The Biteman/Scott plan refuses to acknowledge that rural Wyoming has lost population.

In contrast, the Biteman/Scott plan jettisons those additional lawmakers and refuses to acknowledge that rural Wyoming has lost population. It under-represents places like Laramie County that have grown while over-representing more conservative, rural areas.

In essence, the struggle over the House and Senate versions of the map is political. Far-right lawmakers like Biteman know that there will be a higher likelihood of electing legislators that agree with his ideology if rural Wyoming gets more representation.

The Biteman/Scott map is basically a watered down version of the plan for the Senate proposed by the Wyoming GOP months ago. That plan, which was blatantly unconstitutional, would have given every county a single senator, despite the fact that Niobrara County has 2,500 residents and Laramie County has 100,000.

Senate Majority Floor Leader Ogden Driskill (R-Devil’s Tower) served on the Joint Corporations Committee and helped create the map that the House passed. He appealed to his colleagues on Tuesday that supporting the Biteman/Scott map was a fool’s errand.

He explained that he long opposed adding members to the Legislature until he realized that it was impossible to accomplish the goals of various stakeholders without them.

“This map is really pieces of failed plans that everybody shot down,” Driskill said. “You can’t do a 30/60 Senate-House split and keep it in deviation without angering a whole bunch of people.”

In fact, hundreds of people across the state took part in public forums and meetings that helped shape the map the House ultimately passed.

These are the people, as Driskill mentioned, who will be rightfully angry.

For instance, Uinta County residents asked that a subdivision off of Red Mountain Road be included in a House district along with the rest of Evanston. For the past decade, it has been split off from the town and lumped together with a rural district that stretches all the way to the west side of Green River.

But Sen. Wendy Schuler (R-Evanston) voted for the Biteman/Scott map, which ignores her constituents’ requests.

Likewise, Sen. Dan Furphy (R-Laramie) voted for the Biteman/Scott plan even though it disregards the clear wishes of residents of Rock River, in northern Albany County.

Rock River has for the past 20 years been gerrymandered into a district that stretches south to Encampment and west to Sweetwater County.

The House plan honored those local concerns. The Biteman/Scott plan does not. Furphy voted for it anyway.

It is unclear whose interests Senators like Schuler and Furphy are representing. But it’s not their communities’.

A slap in the face

The Senate will once again discuss redistricting on Thursday, when the chamber will vote on “third reading” for a final version of the map.

A major question hanging over the process will be whether, in their effort to preserve rural power, Senators will create a map with districts that do not adhere to the “one person, one vote” principle that, in part, determines whether the map is constitutional.

Failing this test could leave the legislature open to lawsuits and prolong the redistricting process even further.

In any case, the unveiling of a brand new map with just 10 days left in the legislative session is a slap in the face to the hundreds of people who took time to attend meetings with county clerks and legislators, to advocate for their communities of interest, and to participate in the process in any way.

The Senate’s decision seems to be part of an increasing—and increasingly worrisome—trend that the politicians in Cheyenne are only intent on serving themselves, and not the people they represent.

Wyoming edges toward banning abortion
Scroll to top
Share this ArticleLike this article? Email it to a friend!
Email sent!