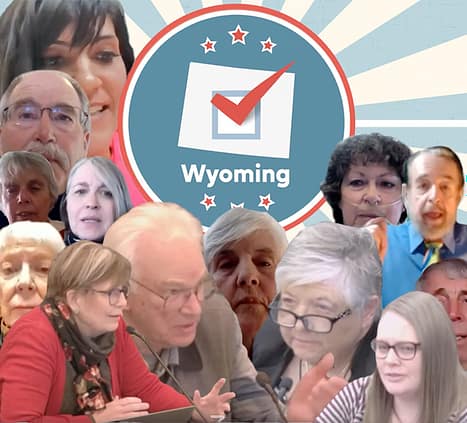 Voters showed up from across the state in person and on Zoom to testify against SF-97.

A cavalcade of angry Wyoming voters attended the hearing on Monday of Senate File 97, “Change in party affiliation,” which would have blocked residents from participating in primary elections unless they were registered with the political party months in advance.

The House Appropriations Committee stayed more than a half hour past its scheduled adjournment to listen to testimony.

Only three members of the “public” spoke in favor of the bill: Wyoming Republican Party Executive Director Kathy Rusell, Wyoming GOP National Committeewoman Nina Webber, and a guy with a Betsy Ross flag sewn to his jacket who said he’d just moved to Wyoming.

The other hour-plus public comment period consisted of a stream of Wyoming voters, many of whom said they were born and raised here or had lived and voted in Wyoming for decades.

At 2:30 p.m., the committee members needed to return to the House for the afternoon session. They adjourned the meeting and planned to reconvene later in the day to discuss the bill and vote.

On his way back to the Senate chamber, SF-97’s sponsor, Bo Biteman (R-Ranchester), was visibly flummoxed and told his colleague that the opposition had “dominated public comment.”

When they reconvened, the House Appropriations Committee voted 5 – 2 on a motion to “Do Not Pass” the proposal. The action did not immediately defeat SF-97, but ensured it would not be heard the next day on the House floor, the final day before a procedural deadline officially killed the bill.

As a result, no changes to Wyoming registration law will impact the 2022 elections. As it has been for decades, any qualified Wyoming resident will be able to register to vote in whatever primary they choose on or before Aug. 16.

Supporters of SF-97, including former U.S. President Donald J. Trump, say that switching parties to vote in a primary election amounts to “cheating.”

This idea was first popularized by billionaire Foster Friess (RIP), who blamed “crossover voting” for his loss to Mark Gordon in the 2018 GOP gubernatorial primary election.

Many people in Wyoming see things a little differently, it seems.

Vicki Swenson, a longtime Gillette educator, told the House Appropriations Committee on Monday that SF-97 would require voters to choose which election to vote in before they even know who the candidates are.

“It’s not the Wyoming way. Voter freedom reflects our values.”

“Wyoming voters tend to vote for the candidate, not for the party,” Swenson said.

Lois Smith, of Casper, said she was insulted by the idea that Wyoming’s current system encourages cheating.

“Asking people to register to vote before they even know the candidates is asking them to vote blind,” Smith said. “That, in my mind, is irresponsible, and goes against everything I was ever taught in civics class.”

Debra East of Fremont County said SF-97 treats voters like livestock, rounding them up and forcing them “through a narrow chute for branding.”

Chuck Harris, a Teton County voter for 40 years, said the bill “is the antithesis of what we stand for. It’s not the Wyoming way. Voter freedom reflects our values. ”

The bottom of the barrel

Others who spoke in opposition to SF-97 on Monday argued that the Legislature should be making it easier to vote, not harder.

Ann Tollefson of Sheridan County said she lives only five miles from her polling place, but it’s a 90-minute round trip to the county clerk’s office, where she would have to register under SF-97.

“And as a senior, that’s a problem,” Tollefson said. “It should be my right as a citizen of Wyoming to choose the candidates I think are best for the future of our state, and be able to vote for them with the fewest restrictions.”

“This is a way to stop people from voting, and I think it’s wrong. We need to have more people vote.”

“It’s absolutely ridiculous to have to go to the county clerk’s office and have a notary [sign the registration],” he said. “This is a way to stop people from voting, and I think it’s wrong. We need to have more people vote.”

Angela Silvester, of Cheyenne, said that as a working single mother it’s sometimes tough to find childcare on Election Day so she can go to the polls. Requiring voters to register months in advance would be yet another obstacle to her civic participation.

Marcella Shaver, of Torrington, said Wyoming’s longtime practice of same-day voter registration puts our state at the top nationwide when it comes to ballot access. But SF-97 “would plummet us to the bottom of the barrel.”

“That is not a selling point when you’re trying to encourage people and businesses to invest in our state,” she said.

The elections that count

SF-97 was only the latest attempt in the Wyoming Legislature to pass a bill limiting voting in primary elections.

After Foster Friess’ 2018 defeat to Mark Gordon, at least four proposals came forward and were defeated during the 2019 session. Another was voted down during the 2020 budget session.

In 2021, two lawmakers in the House sponsored bills to ban “crossover voting,” but they were never introduced.

This year’s attempt began in the Senate. In addition to far-right Freedom Caucus members like Biteman and Sen. Anthony Bouchard (R-Cheyenne), it also enjoyed the sponsorship of Senate leaders like Vice President Ogden Driskill (R-Devils Tower) and Larry Hicks (R-Baggs).

SF-97 nearly failed to clear its first hurdle, passing the “introduction vote” required during budget sessions by a single “aye.” It was initially assigned to the Senate Corporations Committee, which typically handles election-related bills.

But members of that committee had previously voted against similar bills, so SF-97’s supporters lobbied to have it re-assigned to the Senate Agriculture Committee. That committee moooo-ved it forward with a 5 – 0 vote, and it later passed the Senate.

Grassroots pushback to SF-97 was not limited to Monday’s public testimony. It also included hundreds of emails and phone calls to lawmakers, op-eds in statewide media, and more.

As Wyoming elections are increasingly decided in the GOP primaries across the state and for all levels of government, this pushback will need to persist in order to keep politicians from cutting voters out of the elections that count.

Wyoming Legislature passes law to ban abortion if Roe v. Wade is overturned
Scroll to top
Share this ArticleLike this article? Email it to a friend!
Email sent!