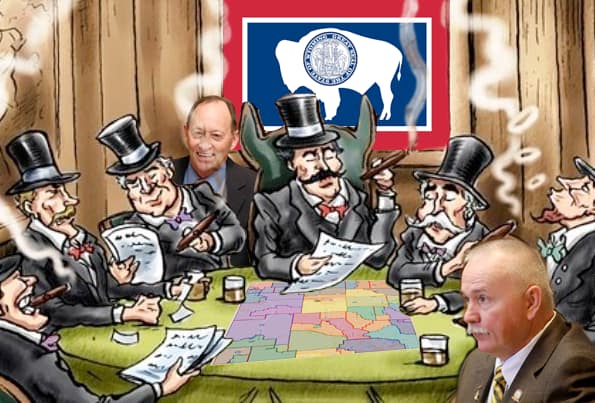 “Redistricting” is not a very accessible public process, for a variety of reasons.

It only happens once in a decade, so very few people have experience with it.

It involves complicated maps and troves of election data that only a handful of policy wonks really understand.

And it is very abstract—instead of policies that affect tangible things, like roads or wildlife, “redistricting” is all about imaginary, invisible lines.

Nevertheless, at least one group of people overcame these obstacles and brought to the Wyoming Legislature a clear, concise, and well-reasoned request for the “redistricting” process that took place during the 2022 session.

Residents of Southside Cheyenne—a racially diverse community with its own cultural heritage whose vote has been split for decades—asked lawmakers to draw legislative districts to make it more likely that they would have representation in the Legislature.

Southside residents for months attended public meetings about “redistricting,” drafted maps illustrating their ideas that fit within the broader scheme of Laramie County, appeared on television and in the press, and built relationships with legislators.

If any members of the public who were not part of the political establishment had a chance of having their voices recognized during the “redistricting” process, it was these residents of Southside Cheyenne.

The biggest reason “redistricting” is inaccessible is that it directly impacts legislators’ political power.

But it turned out that the biggest reason that the “redistricting” process is inaccessible to the public is that it directly impacts legislators’ political power and chances of re-election, so they keep it all to themselves.

With so much at stake for sitting legislators, and since legislators themselves ultimately control the outcome, they feel free to actively block out members of the public whose concerns do not match their own.

This is exactly what happened to the folks of South Cheyenne, and to other constituencies around Wyoming.

The clearest takeaway from the 2022 “redistricting” process was that, as long as legislators are in charge of it, legislators’ number one priority is going to be their own political self-interest.

The Wyoming Independent Citizens Coalition (WICC) led the effort for better Southside representation. Its members urged legislators to draw the area with two House districts of its own, “nested” inside a single Senate district.

Previously, the group had successfully lobbied the Laramie County School District No. 1 Board of Trustees for a dedicated Southside seat. The Legislature’s “redistricting” process shouldn’t have been that different.

“I really think the whole process was about protecting incumbents.”

WICC member Carla Gregorio told Better Wyoming she was heartened after attending early “redistricting” meetings and having lawmakers listen to her requests.

The map the Joint Corporations Committee presented to the full Legislature at the beginning of the 2022 session consolidated Southside Cheyenne into two House districts, rather than the four it had been split between for the past 10 years. This would potentially double the area’s representation.

But as House Bill 100, “Redistricting of the Legislature,” moved through the chambers, it became clear that citizens’ voices were no longer a real concern. Petty infighting, political horse trading, and insider gamesmanship canceled out any outside voices.

“I really think the whole process was about protecting incumbents, and not looking at the needs of a minority community of interest,” Gregorio told Better Wyoming. “They’re gerrymandering, that’s what it came down to. It’s sad.”

The first major blow to Southside residents came in the House.

The original map proposed by the Joint Corporations Committee had drawn many district lines according to “communities of interest,” as Wyoming’s Constitution prescribes.

In keeping these communities of interest whole, the committee’s map redrew districts in a way that would have forced sitting legislators in Sweetwater, Natrona, Albany, and Laramie Counties to run against each other.

The House immediately passed a series of amendments to change the map and protect any sitting legislator from having to run against another.

In Southside Cheyenne, that meant redrawing the district lines to prevent Rep. Jim Blackburn (R-Cheyenne) from having to run against Rep. Clarence Styvar (R-Cheyenne).

In doing so, Southside Cheyenne was once again split between four House districts, completely disregarding its residents’ requests and months of work.

After HB-100 passed the House, the “redistricting” process went to shambles. The Senate voted to completely throw out the House’s version of the map and start all over.

The Senate passed a new, completely different map of its own, forcing the creation of a “conference committee” of select House and Senate members to try and hash out the differences..

The “conference committee” spent the final few days of the 2022 session fiddling around, eventually agreeing upon a map to bring back to each chamber for approval at 10 p.m. the final night of the session.

“We flipped a couple of the Senate districts here in Laramie County so that we protect the incumbency of one of our Senators who would have faced having to run for office.”

Along the way, Southside’s representation improved a bit—at last, it is split between three House districts—but lawmakers’ number one priority to protect themselves remained.

Sen. Bill Landen (R-Casper) who co-chaired the map-making “conference committee,” said as much while he presented the “compromise” to his colleagues in the Senate.

“One of the things we were able to accomplish in this bill that I think is important,” Landen said, “is that we flipped a couple of the Senate districts here in Laramie County so that we protect the incumbency of one of our Senators who would have faced having to run for office, and he does not now.”

It was a classic case of lawmakers picking their voters, instead of the other way around.

According to some kind of folk logic: When it comes to negotiations, if everyone leaves the table unhappy, then a pretty fair deal has been struck.

Beyond a few lucky lawmakers who found their political positions improved, and a few communities like Rock River in Albany County and Red Mountain in Evanston who got their “redistricting” wishes, the new statewide voting map passed during the 2022 Legislative session left very few people happy—but not because it’s good or fair.

It’s because it stinks.

As members of the House and the Senate discussed the final proposed map on the last night of the session, they made their displeasure clear.

If they failed to pass a map, legislators  noted that they would be failing in their constitutional duty. The Wyoming Constitution says the Legislature shall redraw the state’s voting districts every 10 years.

Many members made clear that this obligation was the only thing that compelled them to vote “aye.”

Rep. Landon Brown (R-Cheyenne) told his colleagues he was so disappointed with how they handled redistricting, he may not run again. He said they should have considered HB-100 first, not on the last day.

“I’m going to vote ‘aye’ on this,” he concluded, “but I’m going to plug my nose doing it, because this really stinks.”

Indeed, the “redistricting” process was among the biggest disappointments of the 2022 session. It exposed the bald self interest that motivates many Wyoming lawmakers, and that it illustrated how dramatically the body has prioritized the culture wars rather than doing good work on behalf of the people of Wyoming.

Wyo. Legislature finally (sort of) admits that the coal industry is dying
Scroll to top
Share this ArticleLike this article? Email it to a friend!
Email sent!