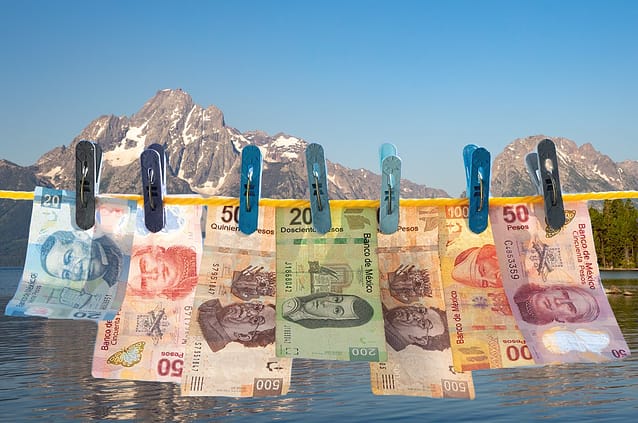 Nothing to see here, folks. Just some foreign currency drying off after a nice Wyoming bath.

Wyoming thinks of itself as a hard-working state, and rightly so. Most people who live here are willing to do what’s necessary to provide for themselves and their families—even if it means long hours, dangerous work, or holding down multiple low-paying jobs.

That’s why it’s galling to learn how Wyoming politicians have created laws that allow ultra-wealthy individuals to exploit our state without any benefit to Wyoming residents.

It’s well known, for instance, that many billionaires “live” in Wyoming—i.e. own a vacation home in Teton County and claim their residence there—in order to take advantage of our state taxes, which are the lowest in the nation.

In the process, they drive up the cost of living, block off public land with their sprawling ranches, and buy politicians to ensure Wyoming’s laws continue to favor their interests.

Less known are Wyoming’s laws that invite the mega-rich from all over the globe to simply hide their money here, buried in trusts within layers of private, anonymously owned companies.

Wyoming’s distinct set of cash-concealing financial tools—nicknamed the “Cowboy Cocktail”—has made the state akin to the Cayman Islands and other sketchy locales happy to shelter people’s dirty money.

More than $30 billion is sitting in private trusts and limited liability companies (LLCs) in Wyoming right now. That’s close to the GDP of the entire state, but it generates virtually no revenue to help fund the state’s public schools or other public services.

So, while Russian oligarchs and others who need to conceal their fortunes use Wyoming as their piggy bank, what do we get? Basically nothing.

This has all been going on for decades, but more and more people are starting to notice.

One such person is Ryan Gurule, policy director of the Financial Accountability and Corporate Transparency (FACT) Coalition, an organization that fights financial corruption on the national and international scale.

Gurule told the Wyoming Legislature’s Joint Revenue Committee last week that the state should consider changing its trust laws to help keep bad actors’ assets out of the United States.

“Wyoming citizens might ask why there is so much desire to attract foreign capital, if doing so might fail to turn into measurable economic gains for local communities.”

Gerule told the committee they should consider the risks and rewards for Wyoming of allowing anyone to store their money here anonymously.

“Wyoming citizens might ask why there is so much desire to attract foreign capital, if doing so might fail to turn into measurable economic gains for local communities,” Gerule said.

How Wyoming attracts scumbags (on purpose)

Wyoming’s shady trust laws caught Gerule’s eye as a result of a Washington Post report on the so-called “Pandora Papers,” a data leak that exposed a trove of millions of financial documents.

The leak revealed that among the people anonymously hiding their money in Wyoming are folks like Igor Makarov, a Russian billionaire who’s been shuffling his assets around the globe to avoid sanctions related to Russia’s invasion of Ukraine.

Other colorful characters socking their money away in Wyoming include a disbarred California lawyer convicted of “pimping and pandering” at massage parlors and a Ukrainian tycoon accused of stealing billions of dollars from one of his nation’s largest banks. Kalil Haché Malkún, who managed the private estates for murderous Dominican dictator Rafael Trujillo, keeps his money here.

In 1977, Wyoming became the first state to authorize LLCs, which help conceal the identity of owners and protect their assets from creditors.

Other states—notably Delaware and Nevada—followed suit, and Wyoming became involved in a race to the bottom to see who could deregulate its financial policies most to attract dirty money.

By 2011, Wyoming lawmakers had adopted more than 100 changes to the state’s trust laws.

The truly perverse thing is how little average Wyomingites benefit. Outside a few “registered agents” and a handful of other paper pushers, the money laundering industry creates virtually no jobs. It’s not taxed, of course, and even the filing fees charged by the state are miniscule, since Wyoming is competing—for some reason—with other states to attract these people.

It’s hard to understand who, precisely, Wyoming’s laws governing trusts are meant to serve. Certainly not the state’s residents.

After the Washington Post story on the “Pandora Papers,” the Wyoming Legislature’s Joint Revenue Committee decided to study how to potentially better manage this financial sector and even, perhaps, tax it.

“There’s a lot of money that really isn’t benefitting all of us who live in Wyoming.”

As the fossil fuel industries continue their long downward trend, some lawmakers are eager to find other ways to generate revenue for Wyoming’s public schools and other critical services.

The committee began considering the state’s trust laws at a meeting last week, at what was essentially a fact-finding session. They heard from the Gerule, the financial corruption watchdog, as well as a long line of billionaire’s lawyers who plead to uphold the status quo, which is working out quite nicely for their clients, thanks.

Ultimately, the committee took no action, but its co-chair, Sen. Cale Case (R-Lander) said the stark contrast in the testimony suggests that they need to look into the issue further.

“I definitely don’t think we are finished with this,” Case said.

Jenn Lowe, executive director of the Equality State Policy Center, which requested the interim study, said her concern is the reputation of the state of Wyoming, and the fact that residents seem to be getting the short end of the stick.

“There has been a negative light shone on our state because of some of the practices that we have here,” Lowe said. “There’s a lot of money that really isn’t benefiting all of us who live in Wyoming.”

Wyoming lawmakers stand by as two more hospitals close their maternity ward...
Scroll to top
Share this ArticleLike this article? Email it to a friend!
Email sent!