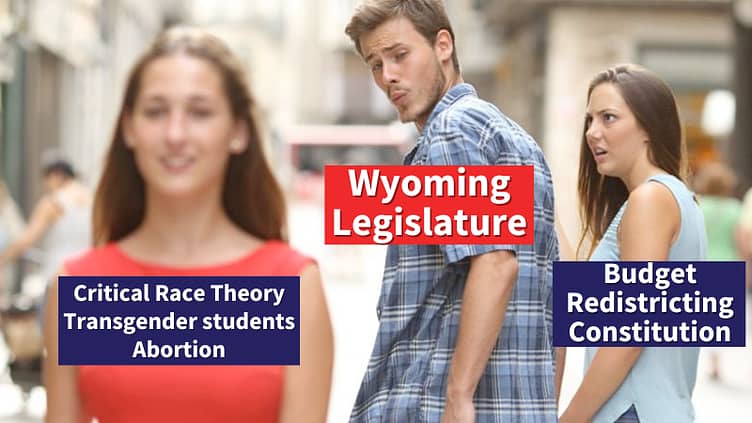 This is part 1 of a four-part series that examines how Wyoming’s Legislature came to focus on hot-button national issues instead of working to solve the very real problems facing our state, and what Wyoming residents need to do about it.

The Wyoming Legislature’s “budget sessions” are just 20 days long. Since lawmakers only meet once a year, the people of Wyoming expect them to get to work and stay focused during this short period of time.

But in 2022, Legislators who had won their seats by ginning up panic and outrage over hot-button national issues hijacked the process. They brought issues to the Capitol that had earned them “likes” and “shares” on social media, which they were parroting from national news and talk radio.

As a result, the Legislature’s constitutional duties—boring things like crafting a two-year state budget, and the once-a-decade process of “redistricting”—fell to the wayside, along with concerns about dwindling funding for education and the rising costs of housing and healthcare.

The sensational and emotional discussions about abortion, guns, and other “culture war” subjects made good fodder for the media. But they did little to solve the real problems Wyoming faces—young people fleeing because the state lacks opportunity, wealthy out-of-staters flocking here to dodge taxes without contributing to our communities, etc.

The Legislature’s 2022 budget session was a grim reminder of how poorly our elected representatives actually represent us when a small portion of our population elects them—and when the majority of Wyoming residents stay home during the elections that count.

Because the Wyoming Legislature’s budget session is just 20 days long, there are regular deadlines to keep things moving along. If any given bill has not passed a certain committee or chamber by a certain date, it’s done for.

As one of these deadlines approached for the Senate during the 2022 budget session, several “hot button” issue bills were behind schedule. Proposals that would stop transgender students from participating in school sports, ban abortion pills, and outlaw Critical Race Theory looked like they were, appropriately, not going to be heard during a budget session.

But a group of Senators who had campaigned on these “culture war” issues threw a fit, and Senate President Dan Dockstader (R-Afton) agreed to suspend the Senate’s rules and allow these bills to be considered.

None of the bills ultimately became law, but the Senate wasted an entire extra day debating them and passing several onto the House, where they ate up even more time.

Meanwhile, the Legislature’s constitutional obligations to redraw the state’s voting districts and craft a budget sat on the backburner.

The issues that matter

The number of bills aimed at hot-button national issues seemed to roughly coincide with how much airtime each topic receives on Fox News and other national outlets.

Critical Race Theory and abortion each got three bills of their own, fueling the narrative that these are widespread and serious problems in Wyoming. Each “CRT” bill sought to ban or limit the topic in Wyoming K-12 schools. Each abortion bill prohibited some aspect of the practice—or, in the case of the “trigger ban” that ultimately passed, the procedure in general.

In fact, Critical Race Theory—an academic theory about systemic racism that is part of some law school curricula—is taught in precisely zero Wyoming K-12 schools. And at the time, Wyoming had a whopping one healthcare provider that offered abortions, in Teton County. Neither of these could be considered sweeping plagues or menaces to Wyoming society.

Outside the echo chambers of conservative media and right-wing political circles, the subject of transgender students participating in schools sports is basically a non-issue. In the rare cases it has come up in Wyoming, the Wyoming High School Activities Association has dealt with it on a case-by-case basis with policies it has had in place for years.

But that didn’t stop lawmakers from breathlessly insisting that these bills come up for debate.

Meanwhile, a personal squabble between two lawmakers who both support the Second Amendment used up more of the Senate’s bandwidth.

Sens. Anthony Bouchard (R-Cheyenne) and Larry Hicks (R-Baggs) both love guns—but they strongly dislike one another. Over the course of the budget session, they exchanged nasty text messages, defiled one anothers’ desks, and Hicks ultimately presided over a motion to strip Bouchard of his committee assignments.

But most absurdly, the two senators duked it out via competing gun freedom bills—which were both basically the same and did nothing to change gun ownership laws for normal Wyomingites—but they divided the Legislature into two bickering camps that wasted even more time.

So what happened to those pesky constitutional duties, the budget and redistricting?

Lawmakers finally got around to them, but sloppily.

One legislator on the Appropriations Committee, which leads the budget process, told a reporter that the budget they passed in 2022 was “the easiest and least controversial budget” he’d worked on as part of the committee.

There are two reasons for this. First, unlike years past when lawmakers vigorously debated where public money would best be spent—conversations that had serious impacts on our state—in 2022 they were busy fighting about Critical Race Theory instead.

And second, the federal government had granted Wyoming hundreds of millions of federal COVID relief dollars that lawmakers used to pad programs that they would otherwise potentially cut.

Redistricting was worse. With little time to seriously consider the complex and consequential subject, the House and Senate threw together a joint committee to hammer out a map over the course of a few days. They ended up with three extra districts—two in the House and one in the Senate—and several voting districts that are “out of deviation,” meaning they have too many or too few people in them.

But who can bother with such trifling when there’s the possibility that a transgender student might want to play sports!?

The Senate passed the “redistricting” map after 10 p.m. on the very last night of the 2022 session, only after several Senators got up to remind their colleagues that this was their constitutional duty.

The map they passed was so bad that Governor Mark Gordon refused to sign off on it. It became law without his signature.

DERAILED: No matter what you learned in school, Wyoming Election Day is not...
Scroll to top
Share this ArticleLike this article? Email it to a friend!
Email sent!