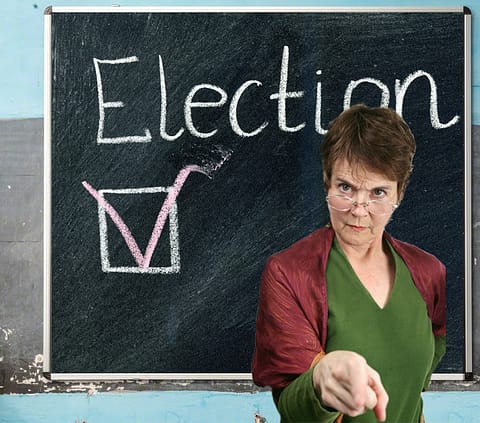 If you wait til November to vote, you're missing the boat!

This is part 2 of a four-part series that examines how Wyoming’s Legislature came to focus on hot-button national issues instead of working to solve the very real problems facing our state, and what Wyoming residents need to do about it.

Read Part 1 of the series here

We all learned from a young age that Election Day is in November.

Our school system—whose social studies and civics courses tend to focus on national politics—taught us that the U.S. Presidential election is the one that really counts. All the rest are minor in comparison.

Add that to the list of “Lies my teacher told me.”

Unfortunately, few people have realized the truth since their school days, judging by the fact that only 30 percent of Wyomingites vote in the elections that count.

Most of the political decisions that affect your daily life—from economic development to criminal justice, from healthcare to education—are made at the state, county, and local levels.

And most of the elections that decide who gets to make these decisions do not take place in November at all. Not in Wyoming, anyway.

These contests, by and large, are decided in the primaries, simply because Wyoming is such a lopsided partisan state.

Sure, people still walk among us who remember Wyoming’s habit of alternating Republican and Democratic Governors. Heck, Democrat Dave Freudenthal was in office until 2011!

But in case you’ve been living in a cave, 2011 was an eternity ago in political years. Basically the Age of Dinosaurs.

Today, unless you reside in a handful of “liberal metropolitan” areas of Wyoming, waiting until November to cast your ballot simply means your vote will hardly count.

No matter what your teacher told you: In Wyoming, in 2022, Election Day is August 16.

Statewide and Congress contests: Over in August

There are five contests for statewide seats in Wyoming this year—governor, secretary of state, treasurer, auditor, and superintendent of public education—along with the much-hyped race for our single U.S. House seat.

Each one of these very important elections will be decided on Aug. 16. End of story.

Only the most hallucinogenic “RINO” fever dream would anyone but a Republican come close to winning any of Wyoming’s 2022 statewide contests.

Three of these races—for secretary of state, treasurer, and auditor—literally have no Democratic candidates. So, whoever wins in August will be the only name on the ballot in November.

And in the other three races, the Democrats running just don’t stand a chance.

There are more than 200,000 registered Republicans in Wyoming—compared to just 43,000 Democrats, 34,000 unaffiliated voters, and a few thousand others.

Some registered Republicans and Independents might cast a vote for a Democrat. But in only the most hallucinogenic “RINO” fever dream would anyone but a Republican come close to winning any of these statewide contests.

These races—and in particular the elections for secretary of state and superintendent of public education—are tightly contested and will have tremendous impacts on the lives of Wyomingites. Moreover, the candidates running against one another have radically different ideas about how to do the job.

If you think you’re going to be able to meaningfully participate in any statewide or Congressional race in November, you are dreadfully mistaken. You need to vote in August.

Legislature decided in less than a month

Seventy-seven of the Wyoming Legislature’s 93 seats are up for election in 2022. (State senators serve four-year terms, so half the Senate sits out each election.)

There are a handful of legislative races that will be potential nail-biters in November—fewer than 20, by our count. Some will pit Republicans against Democrats in Albany, Laramie, and Teton Counties, while other up-for-grabs races around the state will feature Libertarians and Independents.

Outside these few House and Senate districts, however, a vote for a legislative seat not cast in August is a vote wasted.

A whopping 50 legislative seats—10 in the Senate and 40 in the House—will only have one candidate on the ballot in November. A dozen more fall into the category that, technically, will be decided in November, but they take place in such staunchly partisan districts that the best a challenger can hope for is a symbolic or moral victory.

Thanks to gerrymandering by the Legislature, this trend cuts both ways. Most Wyoming districts are so heavily Republican that Democrats hardly stand a chance. But a few districts in Albany and Teton Counties go the other way—they are so heavily Democratic that Republican candidates might as well give up before they start.

This is not at all to say that primary elections for legislative seats are without excitement and nuance. Some primary contests for Wyoming House and Senate seats feature as many as four candidates, and nearly all of them have contestants with starkly different political views, even though they belong to the same party.

In any case, we will know the lion’s share of the next Legislature’s makeup in less than a month. This is also true for most county-level seats, including commissioners, sheriffs, county attorneys, and county clerks.

Nonpartisan organizations that promote good governance—including Better Wyoming—have been fighting for years against efforts that would decrease participation in primary elections.

They are quite low enough already, thank you.

Ever since Foster Friess pulled “crossover voting” from his bag of excuses as to why he lost the 2018 GOP primary for governor, there have been various campaigns to limit who can vote in the Wyoming elections that count.

But these efforts have always failed, for two reasons: First, because many Wyomingites value their freedom to choose in which election they vote. They know that voters are meant to pick politicians—and not the other way around.

And second: Despite the low turnout, many people in Wyoming at least understand that the primaries are where races are truly decided.

Merely understanding, however, is not enough. Far too many people in Wyoming understand the importance of the primaries but fail to act on it.

Now you know how important the Wyoming primaries really are. It’s time to act. Early voting has already started, and Election Day is Aug. 16.