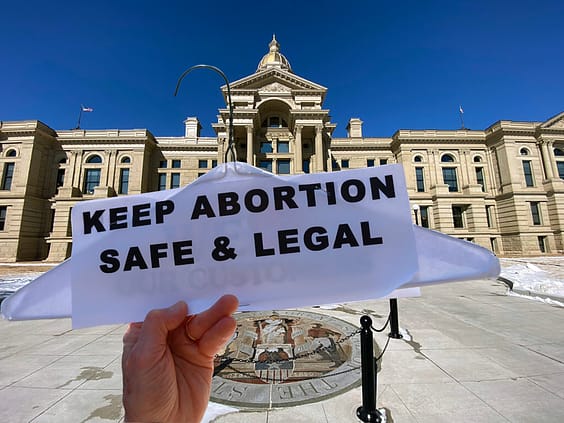 The 1973 U.S. Supreme Court decision Roe v. Wade guaranteed abortion rights nationwide for nearly half a century. Now that Roe has been overturned, everyone is wondering what comes next.

The answer to that question will be decided on a state-by-state basis, since legislatures are now free, post-Roe, to pass laws that restrict abortions (or, conversely, to guarantee reproductive rights).

In Wyoming, abortion remains legal—barely, for now. But a major fight between people who want to make abortion a crime and folks who want to protect reproductive rights is coming up.

In many ways, the fight is already underway.

Beyond the “trigger ban”

The Wyoming Legislature passed an abortion ban during its 2022 session that went into effect when Roe was overturned. But a challenge in Wyoming district court by pro-choice plaintiffs immediately paused this so-called “trigger ban.”

As long as the ban is tied up in courts, abortion remains legal in Wyoming. The case will undoubtedly move from the district court to the Wyoming Supreme Court.

Many observers believe the Wyoming Supreme Court will ultimately rule that banning abortion violates the state’s constitution. In 2012, Wyoming voters passed a constitutional amendment affirming each resident’s right to make their own healthcare decisions.

As long as the ban is tied up in courts, abortion remains legal in Wyoming.

Since abortion is widely considered healthcare, they argue, Wyoming’s constitution should protect it.

In addition, our state constitution includes a number of provisions that guarantee people’s right to privacy. Many legal experts think that this right to privacy includes keeping the government from following you into the doctor’s office.

If the Wyoming Supreme Court rules that banning abortion is, indeed, unconstitutional, advocates for criminalizing abortion will have limited options.

But they will undoubtedly pursue them, and pro-choice supporters in Wyoming will need to organize like never before to make sure abortion remains legal in the state.

There will be two real chances to make sure abortion stays legal in Wyoming: first, at the Legislature; and if that fails, at the ballot box.

Here’s what could go down.

First stop: Back to the Legislature

If the Wyoming Supreme Court rules that banning abortion is unconstitutional, lawmakers who want to criminalize abortion will have to change the state’s constitution.

If pro-choice Wyoming voters turn out this fall, the chances of the next Legislature putting abortion on the ballot could be slim.

Amending the constitution is not easy, even for the Legislature. This is what they would have to do.

First, both the Senate and House would need to pass a “resolution” that calls for a constitutional amendment to be placed on the next General Election ballot. The language of the amendment would need to affirm somehow that abortion can, indeed, be banned in Wyoming.

But here’s the kicker: Unlike a normal bill, which only requires a simple majority of both the House and the Senate, “resolutions” like this must pass with a two-thirds supermajority in each chamber.

So, while a bill can pass the 62-member House with 32 votes and pass the 31-member Senate with 16 votes, a resolution calling for a constitutional amendment would need 41 votes in the House and 21 votes in the Senate.

To be clear, the “trigger ban” the Legislature passed in 2022 received 43 votes in the House and 24 votes in the Senate. That would be narrowly enough to clear the two-thirds threshold required for a proposed constitutional amendment.

But by the time a proposed amendment comes before the Legislature—likely during either the 2023 or 2024 session—the Legislature’s makeup will have changed.

If pro-choice Wyoming voters turn out to support pro-choice candidates this fall, the chances of the next Legislature passing a resolution to put abortion on the ballot could be slim.

If the Legislature does manage a two-thirds supermajority in both chambers to advance an abortion ban amendment, the fight is far from over.

In that case, whatever amendment passes the Legislature would appear on the 2024 General Election ballot. A simple majority of Wyoming voters would then decide whether it becomes part of our state constitution—or, whether abortion would remain legal.

A very similar scenario recently played out in Kansas, with encouraging results for Wyoming.

Kansas, like Wyoming, is a solid red state, and its politics have historically been more heavily influenced by religious conservatism than traditionally libertarian Wyoming.

When the U.S. Supreme Court overturned Roe, some Kansas lawmakers were eager to make abortion illegal. But the Kansas Constitution prevented their legislature from passing a ban.

So pro-criminalization advocates attempted to amend the Kansas Constitution, putting the question to voters during a statewide election in August.

Wyoming has its own, similar history. In 1994, a proposed ban on most abortions was rejected by roughly 60 percent of Wyoming voters.

In any case, there is strong precedent from both in and outside of Wyoming to suggest that even if our lawmakers want to criminalize abortion, the people can still prevent them from doing it with a statewide vote.

Lawyers and lobbyists can’t save us

Pro-choice Wyoming State Senator Charlie Scott (R-Casper) told a reporter during the 2022 legislative session that, while anti-abortion advocates have been organizing at the grassroots level for decades, the pro-choice side has been too reliant on court decisions and lobbying.

Now that Roe is gone, the pro-choice side has no choice but to get organized.

The benefits of doing so are already clear. Kansas’ recent victory shocked the nation, but it shouldn’t have—a robust, well-funded grassroots movement of reproductive rights advocates had been canvassing the state heavily for months in advance of the election, knocking on doors to battle back misinformation and making sure people turned out to the polls.

Even Wyoming’s 1994 pro-choice election victory was thanks largely to a grassoots coalition led by two Republican former lawmakers, Warren Morton and Tom Stroock.

While towns across Wyoming have seen fairly large turnout at protests since Roe was overturned, no one has yet managed to organize these pro-choice advocates to build actual political power.

Notably, hundreds of people turned out for pro-choice rallies in Casper this summer, but few if any helped support the re-election campaign of Rep. Pat Sweeney (R-Casper), a staunch abortion defender who lost to a challenger who wants to criminalize abortion in the August GOP primary.

As the vote margin in the Wyoming Legislature over abortion remains razor thin, losing pro-choice Republican votes like Sweeeney’s is something that reproductive rights advocates can scarcely afford.

If pro-choice Wyomingites want to protect abortion rights in the post-Roe era, they will not only need to turn out in numbers—they will need to be able to identify the levers of power that will decide abortion’s legal fate, and they will need to learn how to pull them.

Local Wyoming elections have climate impacts
Scroll to top
Share this ArticleLike this article? Email it to a friend!
Email sent!