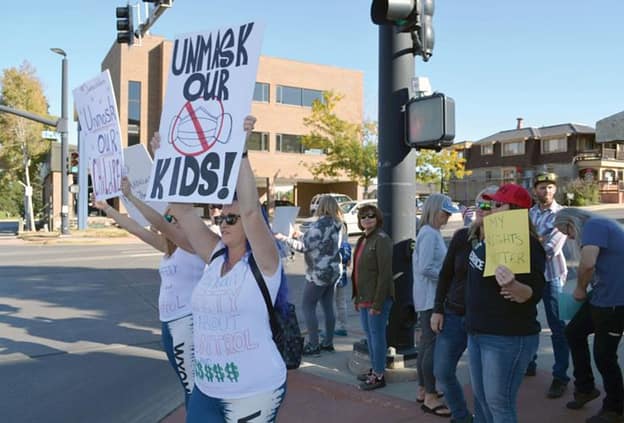 Protesters who railed against masks, LGBTQ books, and "critical race theory" have traded their signs for campaign slogans and are running for school board seats across Wyoming. (photo: The Sheridan Press)

Many parents and others who booed, shouted, and cursed at school board members over COVID-19 mask mandates in Wyoming now want to be on the other side of the boardroom, calling the shots at meetings instead of shutting them down.

Groups that coalesced around misinformed anti-mask and anti-vaccine protests have expanded to other national hot-button social issues, like bans on LGBTQ-related books, transgender athletes, and so-called “critical race theory.”

Across Wyoming, ballots for the Nov. 8 general election include candidates who could really care less about quality public education or effectively running a school district. Instead, they are dead set on pushing their ideological agendas and conspiracy theories from seats on school boards.

These candidates—in some cases running coordinated campaigns for multiple seats on local school boards—would normally be cast aside as radicals, except that they have serious backing from organized right-wing groups.

Wyoming voters will need to become informed and vote all the way down the ballot this fall, paying close attention to who is vying to guide their local schools.

Politics is now front-and-center in nonpartisan Wyoming school board races.

The Wyoming Legislature defeated a bill in 2021 that would have made it mandatory for school board candidates to list their party affiliation. But county political parties are endorsing candidates this year anyway.

It’s not about dialogue. It’s about dogma.

In order to decide who to endorse, the Hot Springs County GOP asked candidates to give one-word answers to questions like, “Should teachers be able to carry guns in school?” and “Should school districts turn down federal funds?” They explicitly forbid longer, more nuanced answers that would actually make candidates’ positions on complex issues clear.

Brian Farmer, executive director of the Wyoming School Boards Association, said he’s never seen anything like this before.

“It’s not about dialogue, it’s about dogma,” Farmer said. “They’re interested in purity tests of whether a person meets a partisan endorsement for an office, not whether this is the best person for the office. That’s not what school boards have been or were intended to be.”

Moms for Liberty, a Florida-based group that formed to fight mask and vaccine mandates and now parrots other right-wing talking points, has chapters in several Wyoming communities. They are promoting candidates and pushing the conversation about schools into absurd territory.

For instance, the Laramie County Moms for Liberty chapter is organizing an event this week in Cheyenne to “Stop the sexualization of our children.” This rhetoric is commonly used to stoke fears about debunked misinformation, like a recent transphobic rumor that students use litter boxes in Campbell County schools because they “identify” as animals.

The event in Cheyenne will feature unelected and soon-to-be-former Wyoming State Superintendent of Instruction, Brian Schroeder, who has made no secret of his hostility toward trans youth. Its keynote speaker is the director of No Left Turn in Education, another national right-wing outfit.

Scores of candidates in confusing races

Many Wyoming school board elections are complicated this year by the sheer number of people running in many school districts. Fifteen candidates are running for four seats in Natrona County, another 15 are running in Laramie County School District No. 1, and a total of 20 are running for Albany County’s lone district.

Many voters will look at the long list of candidates and confusing election configurations and simply skip them.

In Albany County, for instance, the single school district has a nine-member board. Seven of those seats are up for election this year, because two trustees whose seats would normally not have not been up for election in 2022 resigned. The trustees who were appointed to replace them automatically must run in the next election, but they are only running for two-year terms, instead of normal four-year terms.

As a result, there are four separate school board races to fill the seven seats, and every eligible voter in the county casts a vote in all four elections.

Because school board races tend to involve far less advertising and electioneering than their more high-profile counterparts, it’s likely that many voters will look at the long list of candidates and confusing election configurations and simply skip them.

Where to look for information

Unfortunately, no comprehensive clearinghouse exists for information about school board candidates.

The best single location is probably the League of Women Voters’ “Vote 411” website, which consolidates candidates’ answers to questionnaires the League sends to all people seeking office. On the site, you simply enter your address and it shows you your local races.

Another Wyoming-centric site is WyVote, which operates along the same lines.

The shortcoming of both Vote 411 and WyVote is that they only include information on candidates who voluntarily fill out their questionnaires.

The League of Women Voters has chapters in Campbell, Albany, Laramie, and Fremont Counties, many of which host candidate forums that are covered by local news outlets and recorded on YouTube and Facebook.

Voters can also contact candidates directly to ask them about their positions. For candidate contact information, folks can visit their local county clerks’ website and look under the “Elections” tab for a list of general election school board candidates.

Ginned up controversies about social issues make it more difficult for school boards to do their actual jobs. Across Wyoming, school districts are already having trouble attracting and retaining quality educators—a problem that will no doubt remain unsolved if school boards turn their focus to policing library books and athlete gender identity.

Farmer, from the Wyoming School Board Association, expects some school board races to be won or lost on hot-button social issues that have little or nothing to do with Wyoming and its public school system. But he said his peers in other states that have already held school board elections told him candidates with radical views did not prevail in many contests.

“I don’t think it’s going to be sort of a clean sweep that everybody who’s extreme are the ones who are getting elected,” he predicted. “I think a lot of our communities are still relatively locally focused.”

Does Governor Gordon really care about mental health?
Scroll to top
Share this ArticleLike this article? Email it to a friend!
Email sent!