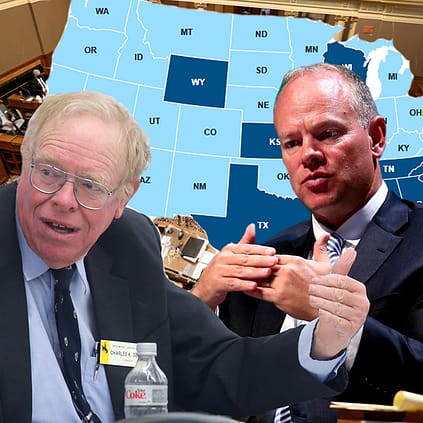 Our intrepid leaders have brought us to an island in a sea of other states that have healthcare.

Wyoming lawmakers who oppose Medicaid expansion tend to have a few things in common.

One is a lack of their own good ideas about how to improve the state’s healthcare system. Another is a strong belief that, instead of expanding Medicaid, there is some kind of “Wyoming way” to fix our problems.

Take for instance, Rep. Christopher Knapp (R-Gillette), who was asked in a recent candidate forum if he supports Medicaid expansion.

Knapp said, no, he opposes the policy. But after trotting out a few inaccurate talking points to explain why, he emphatically stated that we need to find a “Wyoming solution” to improving affordable healthcare access, supporting our local hospitals, and addressing the state’s mental health crisis.

“We need to look inside our own state instead of depending on the federal government,” he said.

Knapp, who was recently re-elected to his second term, is part of a decade-long tradition of Wyoming politicians who vaguely promote a state-based healthcare solution while doing nothing to actually create or advance one.

In fact, virtually every single one of the 39 states that have now adopted Medicaid expansion looked first at the possibility of creating a state-based solution.

Not a single one of them succeeded.

At this point, we should all realize that when a Wyoming lawmaker opposes Medicaid expansion and instead insists that we instead find a “Wyoming solution”—as Gov. Mark Gordon recently did—we can understand their statement to really mean: “I don’t have any ideas about how to fix our healthcare problems, and I would appreciate it if you stopped asking me.”

Legislators’ misadventures in search of a “Wyoming healthcare solution” to date back at least to 2009.

When a lawmaker insists that we find a “Wyoming solution,” they really mean: “I don’t have any ideas about how to fix our healthcare problems, and I would appreciate it if you stopped asking me.”

The pilot program was poorly received. Only 85 people throughout Wyoming signed up for it.

Two years later, in 2011, Scott proposed that the Legislature double down on his brainchild. He asked his colleagues to allocate $24.2 million to “Healthy Frontiers” to increase its enrollment by 2,000 people.

That allocation would equal a little over $30 million in today’s dollars. If Wyoming were to expand Medicaid today, we could cover ten times that number of people for a third of the cost.

Unsurprisingly, Scott’s colleagues decided instead to scrap the project.

In 2010, U.S. Congress passed the Affordable Care Act. Wyoming joined 25 other states to sue the federal government, and two years later the U.S. Supreme Court ruled that Medicaid expansion as part of the ACA would be optional.

Meanwhile, the Wyoming Department of Health continued to research how best the state might solve the issue of the tens of thousands of uninsured residents who have no reasonable access to basic healthcare.

The department came to a politically inconvenient conclusion: Medicaid expansion was our best bet.

Then-Gov. Matt Mead hemmed and hawed at first, joining the ranks of politicians insisting on a “Wyoming solution.”

“Let us try within the law that is upon us to find the best deal, the best fit for Wyoming,” Mead said during his 2013 State of the State speech. “To do nothing puts the full brunt of the ACA upon us. Everything will be dictated by the federal government without an opportunity to tailor the law to our needs.”

Mead was reelected in 2014, at which point he changed his tune and began supporting Medicaid expansion. Sadly, his advocacy was too little, too late. His proposed SHARE plan failed to gain support from the Legislature.

In 2015, Mead essentially mocked a bill that did pass the Legislature, which allocated $3 million in funding for hospitals that lose money providing treatment via emergency rooms to uninsured people who cannot pay.

The Legislature allocated $1M to the Dept. of Health to study “creative” healthcare ideas. Three years later, no studies have been conducted.

Mead allowed the bill to become law without signing it. He described it as a woefully inadequate half measure compared to Medicaid expansion, which would offset at least half of the $125 million Wyoming hospitals lose each year providing “uncompensated care.”

Then, for several years, Wyoming legislators simply pretended like we didn’t have a problem, even as our rural hospitals struggled and our ranks of uninsured residents grew.

In 2019, the Legislature voted to allocate $1 million to the Department of Health to study “creative” healthcare ideas.

Three years later, no studies have been conducted.

Wyoming is far from the only state that has searched in vain for a local solution instead of expanding Medicaid.

Lawmakers in Utah, Nebraska, South Dakota, and pretty much every other state that eventually adopted Medicaid expansion have first insisted that they try a state-based program first.

“Rather than depending on the federal government, let’s look for solutions here in Nebraska so that we can get more people covered by private insurance,” Nebraska Gov. Pete Ricketts said in 2015.

Currently, Wyoming is the only state in the Mountain West that has yet to expand Medicaid, and it is alone among all its neighbors.

Beginning to see the light

Fortunately, many Wyoming legislators who for years opposed Medicaid expansion have come to realize that, in fact, there is no mystical Wyoming solution waiting to be discovered.

In 2021, before joining his colleagues in the Wyoming House to advance a Medicaid expansion bill for the first time in history, then-Speaker of the House Eric Barlow (R-Gillette) said that the clear lack of a Wyoming solution was among the reasons he had changed his mind.

“I’m going to vote yes this time, because I haven’t seen any other solution,” Barlow said. “Nobody’s brought anything forward, and I’ve looked myself. If we don’t vote for this, then what’s our idea then?”

Last month, Rep. Steve Harshman (R-Casper) told his colleagues on the Joint Revenue Committee that he had voted against Medicaid expansion 10 times before deciding to support it, in part because it is obvious that no state-based approach exists.

The Joint Revenue Committee proceeded to vote 9 – 5 to sponsor a bill to expand Medicaid during the upcoming 2023 legislative session.

What will Wyo lawmakers do with an extra $3 billion this year?
Scroll to top
Share this ArticleLike this article? Email it to a friend!
Email sent!