Some people say Wyoming has the worst gender wage gap in the nation. Others say there’s actually no gender wage gap—it’s either make-believe, or market forces simply dictate who gets paid what. What is your stance on the issue?

I’m a data person, and the data say women get paid 69 cents on the dollar compared to men in Wyoming. That’s pretty close to the worst in the nation—it varies every once in a while, but it’s still right up there. So, that’s a gender wage gap, as far as I’m concerned. Are there reasons for that? Sure. But are there things we could do to mitigate a little bit? I think so.

I think one of the big issues in our state is childcare. Some women can’t get the same jobs men get because of the schedules—if you’re working for oil and gas and it’s a 12-hour day, and you don’t have childcare for 12 hours, then that precludes somebody from even applying for that job. But I think there are also discrepancies in equal jobs, jobs that are exactly the same, and I think that different genders are paid different amounts. Should it be addressed? Absolutely.

In cases when men and women are working the same job and being paid differently, what can we do to address that?

We don’t train young women to negotiate for themselves in the same way we’ve always trained men. I think that’s changing, but I think there are still some issues there. It can be hard for us—and I speak from personal experience—to negotiate for yourself. And sometimes we just don’t know enough information to negotiate effectively.

The other thing is that we just need to hold industries accountable, to make sure that, for like jobs, people are being paid the same—to make sure there’s a regular salary schedule being followed. To use education as an example, they have salary schedules and they follow those schedules based on education and experience. That’s the kind of thing I think we need to do everywhere.

What should the state’s role be, if any, in funding public preschool, early childhood education, daycare, or things like that?

That’s a hard question. It’s like a lot of other service sorts of things—you really don’t want the state managing and getting into that at a high level. But on the other hand it’s just like any other industry, in that we can provide incentives, we can make it easier for people to get licenses to do the things they have to do in order to do business. So I think the state has a role in fostering an environment in which people want to start early childhood businesses and can make a living at it.

During the economic downturn, how should the state approach funding education, from K-12 through university?

That’s my area of passion and greatest knowledge. I truly believe that the worst thing you can do during a difficult economic time is cut back on education significantly—because you need an educated workforce, you need people to be retrained, you need people who can get out there and do a different job or be more marketable for the jobs that are available.

In terms of K-12, we have a funding formula—that formula just needs to be followed, or they need to give good reasons why that wouldn’t happen. For the community colleges and the university, we need to understand that we have a tremendous system in this state. We want to maintain that system and make sure that everybody has access and everybody can get an affordable education in our state. Cutting back significantly at the university, they’re almost forced to raise tuition, and that goes back on the backs of the citizens of the state. We have to be careful with that.

What else do we need to do to address the economic downturn?

One of the things we need to certainly look at is doing more for the smaller businesses in the state, helping them grow, helping the medium-sized businesses so they become a little larger.

We all say, “Let’s diversify our economy,” and I totally believe in that. On the other hand, I think we have to be realistic. We’ve tried a lot of businesses and those businesses just don’t want to come into the state. But I think we should look at models like Utah. They weren’t so dependant on one industry like we are, but they’ve done a really good job of bringing technology firms and have built the infrastructure to help with that. We need to help provide some incentive for people to come into our state—the tax base just naturally does that, but I think there are other things we can do to help support industries that want to come in.

I also think—and I know that this is a little controversial—that we need to look at wind and solar. That, then, for us, rounds out the whole energy spectrum, and that’s where our expertise is anyway as a state. So there’s no reason why we don’t look at it. That doesn’t mean we ruin our environment or the aesthetics of our landscape, but it’s certainly something we should consider.

How should the state approach the use of its Rainy Day Fund?

My concern is that there are no written guidelines on how the Rainy Day Fund should be used. I liken it to a savings account at home. If you use your savings account to fund your daily life, the next thing you know, you have no savings account. So I’m really concerned if we as a state get in a situation where we’re funding regular operations out of that Rainy Day account on a regular basis, without any guidelines, then it will be gone.

There’s a debate right now over whether federal public land in Wyoming should remain under federal control, or whether ownership or control of that land should be transferred to the state. What are your thoughts?

I really am an advocate for keeping public lands in public hands, so I think that the federal government should maintain control over the land. If you look at that 357-page report that was done by the committee that was charged with investigating the whole thing, I’m certainly not an expert on it—I didn’t read it all in detail—but I read the executive summary thoroughly and they are not advocating for exchange of hands. But they are advocating that we utilize some of the things that are already available to us under the current rules that we’re not leveraging as much as we should.[/fusion_text][/three_fifth][two_fifth last=”yes” spacing=”yes” center_content=”no” hide_on_mobile=”no” background_color=”” background_image=”” background_repeat=”no-repeat” background_position=”left top” border_position=”all” border_size=”0px” border_color=”” border_style=”” padding=”” margin_top=”” margin_bottom=”” animation_type=”” animation_direction=”” animation_speed=”0.1″ class=”” id=””][fusion_text]

An Interview with Debbie Bovee, a Candidate for HD-36 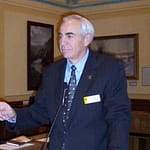