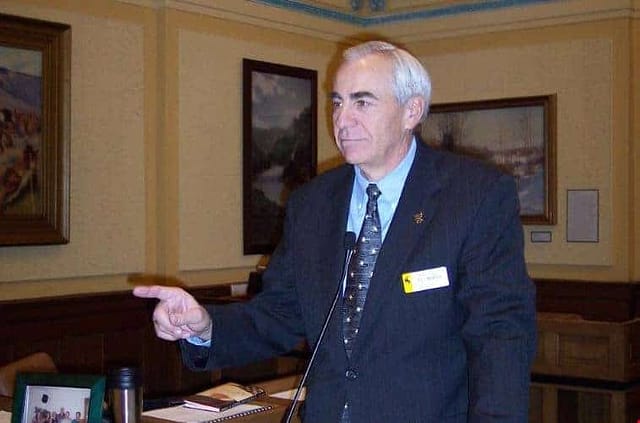 If it was irony that the high school choir entertaining the Wyoming Senate Tuesday was going for, they nailed it.

After new Senate President Eli Bebout (R-Riverton) and others spent a half-hour focusing on ways for the state to dig its education system out of a $1.5 billion deficit, the choir sang an upbeat “Keep on the Sunny Side.” 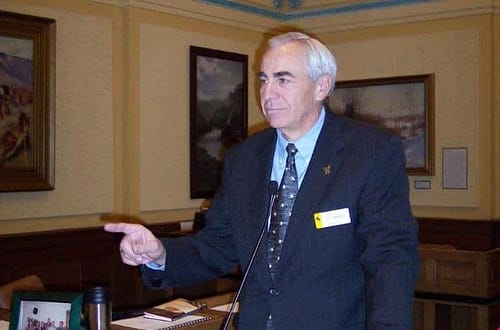 [/fusion_text][/two_fifth][three_fourth last=”yes” spacing=”yes” center_content=”no” hide_on_mobile=”no” background_color=”” background_image=”” background_repeat=”no-repeat” background_position=”left top” border_position=”all” border_size=”0px” border_color=”” border_style=”” padding=”” margin_top=”” margin_bottom=”” animation_type=”” animation_direction=”” animation_speed=”0.1″ class=”” id=””][fusion_text]But the Wyoming Senate and the House, being happy and having a song in their hearts will probably last … well, until Wednesday morning. That’s when Gov. Matt Mead will deliver his annual “State of the State” address at 10 a.m. to a joint session of the newly convened 64th Wyoming Legislature. Fiscally, it’s not going to be pretty.

Bebout was sworn in Tuesday as the Senate president, making him the only legislator in the state’s history to lead both the House and Senate during his political career. He switched parties from Democrat to the GOP while still a House member, but he sat in the speaker’s chair as a Republican.

Bebout spoke briefly about the major issues lawmakers will face this year as Wyoming tries to rebound from a downturn caused by low tax revenue from the minerals industry, which has been hit by lower prices for fossil fuels.

Can you say “economic diversification?” Bebout and the rest of the leadership said the phrase at least 10 times as the Senate addressed the need to expand the state’s tax base to avoid another boom-and-bust period. It’s always on the agenda during a “bust,” and no Legislature has done much to actually address the problem in the past century.

But they’re still trying. Oddly, Bebout suggested all his colleagues will need their senses of humor while they tackle the state’s largest problems. For the record, nobody laughed.

“We need to create jobs, jobs, and jobs, and to do that we must improve infrastructure, diversify our economy, responsibly develop minerals and add value to those tremendous minerals, grow tourism and have a vibrant ag economy,” Bebout said.

At the same time, he said, Wyoming must live within its existing revenues and he prepared both legislators and the public for more budget cuts, although he didn’t say where those reductions will take place. Last year some of the programs that were completely eliminated were the Tax Rebate for the Elderly and Disabled, and the Family Literacy Center.

This is the second year the Legislature is meeting in the Jonah Business Center because work on renovating the Capitol Complex, including the Capitol Building and the Herschler Building, is behind schedule.

“Restoration at the Capitol is ongoing,” Bebout said to a smattering of applause. “The budget is $300 million and I pledge to you we will work diligently to get it done on time and on budget.”

Bebout praised the Legislature’s leadership—which he’s been part of for most of the past 23 years—for building the state’s Permanent Mineral Trust Fund to more than $12 billion. The state’s “Rainy Day Fund” for emergencies, he added, has grown to $1.5 billion.

No speech by a Senate president would be complete without one that blasts the White House for “federal overreach,” and Bebout didn’t disappoint.

“We need to work with our congressional delegation to either repeal or greatly reduce federal regulations that create a choking effect on the private sector,” he intoned. “I could go on and on about federal overreach—the executive orders that have been detrimental to Wyoming, you know we need to speed up the permitting processes, and oppose the new BLM sage grouse plan.”

Bebout briefly touched on one of his major hopes: that the state will eventually take over management of federal public lands. The Legislature will consider a proposed constitutional amendment on the subject this session that critics fear would result in public lands being sold to private developers.

He said, “We need to improve multiple use and sustained yield for federal lands for agriculture, responsible use of our minerals, and we still need to delist wolves and grizzlies. We can do a better job managing those than the federal government can.”

“For the last six years [I’ve been in the Senate] President Bebout has lamented the specter of federal overreach and executive decisions,” the Democrat said. “I find myself agreeing with him.”

On a serious note, Rothfuss said his party now only has three senators in the 30-member Senate. Democrats lost one seat when Sen. Floyd Esquibel of Cheyenne lost his seat last year to Republican Affie Ellis.

Rothfuss said with such small representation, Democrats will not be represented on the Senate Agriculture, Corporations, Revenue, and Labor and Health committees.

“We’re in a bit of a precarious situation as a minority this year” he said. “In a democracy a one-party system is not the objective. The smaller a party gets, the more difficult it is to serve in the role of the loyal opposition, which is a valuable role … In a successful democracy it’s not useful to have only one voice. It’s not useful to have a chamber where you cannot bounce off your ideas [on the minority].”[/fusion_text][/three_fourth]

An Interview with Jackie Freeze, a Candidate for HD-48

“A year has gone by, and things have not gotten better”: Mead urges action...
Scroll to top
Share this ArticleLike this article? Email it to a friend!
Email sent!