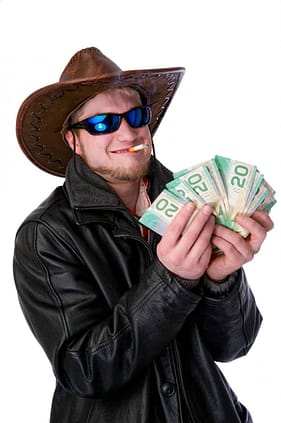 This middle-income Wyoming citizen might feel rich right now, but he's taxed at a much higher rate than his actually wealthy neighbors.

The truth about Wyoming’s tax structure and how it affects our economy is likely the opposite of what many residents think.

It’s important to know how the tax system works—especially who it punishes and who it rewards—as state legislators reluctantly begin debating if any taxes should be raised or new ones created.

Talking about paying higher taxes makes most people angry, so legislators only do it as a last resort. Lawmakers feel a range of emotions when tax increases are proposed, but two of the most common are panic and fear. They’re afraid if they make people pay more to operate state government, voters will take away their jobs as legislators.

But Wyoming needs to have a discussion about taxes, and it needs to begin now. Wyoming state government needs to find $400 million annually through at least 2022 to keep the quality of its public schools at current levels. Cutting that much money from the education budget would create schools where no parent would want to send their kids.

Every type of tax should be on the table, especially because what many people believe about the state’s tax system is wrong. In fact, taxes that have traditionally been considered political suicide might be the key to creating a consistent source of funding that would help the state’s economy while using money from people who can most afford to pay it.

Let’s dispel some of the common myths about Wyoming’s assortment of taxes. Conventional wisdom is that state and local sales taxes are the fairest way to tax all citizens no matter how much they earn because everyone pays the same rate.

Wrong. According to the Institute on Taxation and Economic Policy (ITEP), a D.C. think tank that studies state tax policy, Wyoming’s wealthiest residents pay the lowest tax rate in the country. Meanwhile, people at the bottom 20 percent of Wyoming’s shaky economic ladder pay taxes at seven-times the rate that the top one percent of earners do. That’s the largest tax rate discrepancy between rich and poor in the United States.

A sales tax is regressive. A Meeteetse millionaire and the poorest person in Powell live only about 40 miles away, and they pay the same 4 cents in state sales tax per dollar they spend. But if the wealthy person buys a new car, it costs only a small fraction of the money he has. The person living in poverty may need to buy new clothes to help him get a job, but the cost might take a higher percentage of the total amount of money he has to survive.

Another way to look at it: Working people tend to spend their entire paycheck, and everything they pay for except food and rent gets taxed. Rich people can afford to sock away lots of their earnings, particularly in Wyoming, where there are lots of tax loopholes for stockpiling wealth. So, with a sales tax, nearly all of a working- or middle-class person’s income is taxed, while much of a wealthy person’s income is not.

Wyoming, which generates about 27 percent of its total revenue from general sales taxes, is ranked the 14th worst state in tax fairness in ITEP’s Tax Inequality Index (see Appendix B).

An income tax has been considered a no-go in Wyoming since the mid-1930s when the state drowned out income tax advocates and chose to implement a “temporary” sales tax. If you’re a Wyoming official, you utter support for an income tax at your own peril.

Wyoming is one of only nine states that do not have a personal or corporate income tax. That is seen as a source of pride for officials who note that publications like Bloomberg Wealth Management magazine consistently rate Wyoming as the No. 1 “most tax-friendly“ state in the nation.

But where are all of the companies that have flocked to the state because of its great business rating? The vast majority are in the other 41 states that have income taxes, leaving Wyoming to depend on the minerals industry to pay severance taxes and property taxes to fund nearly three-fourths of state government.

Taxes that prop up income inequality

In boom times having the fossil fuel industry do well means almost everyone in the state benefits, either from jobs, money flowing in many sectors of the economy, and new opportunities for mineral-related businesses. But when mineral production and prices nosedive, as they have in recent years, much less money goes into the state’s coffers and Wyoming revenue dries up, creating situations like the annual $400 million shortfalls in education funding.

Common wisdom in Wyoming (often promoted by lobbyists) says that instituting income taxes would be the worst thing the state could do because it would drive businesses away or make them decide not to come here at all. Legislators contend that would keep the state from diversifying its economy.

But ITEP has found that states that lack robust personal income taxes and that rely heavily on consumption taxes have some of the most lopsided tax systems in the nation.

“These states require far higher payments, relative to income, from low- and moderate-income families than from the wealthy,” ITEP economists wrote a January 2017 report. “They often levy above-average tax rates on families facing economic hardship and below-average rates on their most affluent residents. In other words, these states are effectively worsening income inequality through their tax policies.”

On the other hand, income tax can be designed so that people who can afford to pay more are taxed at higher rates than folks who need bigger chunks of their paycheck to get by.

Tax Reform 2000, a legislative commission that examined the state’s tax structure in the wake of declining revenue, made establishing individual and corporate income taxes its top recommendation in 1999. But a minerals boom quickly quelled all talk about an income tax, so the idea was put on hold until this year’s education funding crisis.

Aidan Davis, an ITEP senior analyst, noted polls throughout the nation show strong public support for funding public schools. But some state legislatures have taken staunch anti-tax stances and sacrificed education instead of raising new revenues, she said. Arizona and Oklahoma, for instance, have moved to a four-day school week.

“What’s happening to their education systems has been pretty striking,” Davis said. “It’s a situation not a lot of states want to find themselves in.”

Jason Shogren, a University of Wyoming economist, said income tax is less popular in Wyoming because people see it as compulsory, whereas people see sales tax as more voluntary.

Shogren noted that Wyoming made a huge investment in its public education system to reduce class sizes and increase teachers’ salaries in order to attract high-quality instructors. But those gains are at risk if the state must spend less money on schools. Furthermore, schools are often at the economic heart of rural communities.

“School districts have kept small towns alive by not shutting down their schools,” he said. But the lack of state funds would force communities to pay for schools through higher local property taxes, which would result in wealthy parts of the state like Teton County maintaining good schools while elsewhere in the state school quality would suffer.

Wyoming residents often complain that their taxes are too high. Perhaps this is because taxes here are administered an unjust way, taxing working- and middle-class people at much higher rates than wealthy folks.

But it’s also likely because we’re just not used to paying taxes. Wyoming’s dependence on mineral severance taxes for revenue has resulted in personal and other Wyoming business tax rates being among the lowest in the country.

Research by the Wyoming Tax Association, which represents some of the largest companies that pay state taxes, showed the average family of three in Wyoming pays about $3,000 in taxes if they own a house valued at $190,000. For that small sum, the WTA said, taxpayers receive about $30,000 in public services, including schools, roads, police, and firefighters.

Here’s the bottom line: Wyoming residents pay little in taxes compared to the cost of services they receive because they are heavily subsidized by the minerals industry. Still, the lowest-income residents pay much higher tax rates than the state’s wealthiest citizens. If Wyoming had an individual and/or a corporate income tax, high-income residents would pay taxes to a system that reduces the tax disparity between the rich and the poor.

Cookout and Speak Out for Wyoming Public Schools!

Guess which sparsely populated mineral rich state is getting an income tax&...
Scroll to top
Share this ArticleLike this article? Email it to a friend!
Email sent!