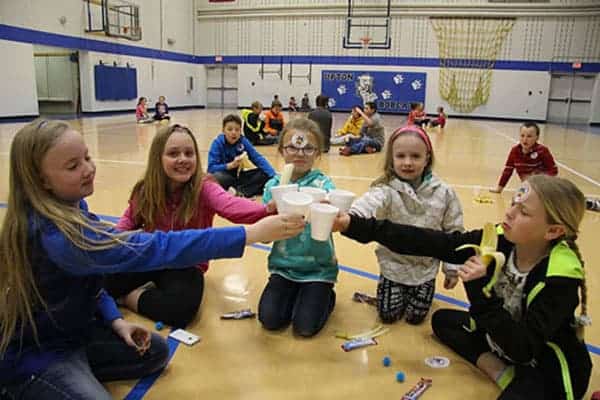 Fourth graders in Upton, Wyoming, get some "Breakfast for Brains" in advance of standardized testing. Wyoming students who qualify for free or reduced lunch score better on these tests than in any other state.

By the Better Wyoming staff

State legislators who claim Wyoming doesn’t get enough “bang for the bucks” it spends on public education should get a failing grade.

Data released earlier this year by the National Assessment of Educational Progress (NAEP) shows that Wyoming tops the nation in an important measure of educational success: We’re first nationwide in closing the “achievement gap” between low-income students and those from families with more financial resources.

In other states, students who qualify for free or reduced lunch tend to perform worse than their financially better-off classmates. But in Wyoming, the investment we’ve made in education pays off—students in both upper and lower economic classes score nearly the same in 4th and 8th grade reading and math, and those scores are above the national average.

Seems like pretty good bang for the bucks to us.

Fourth graders in Upton, Wyoming, get some “Breakfast for Brains” in advance of standardized testing. Wyoming students who qualify for free or reduced lunch score better on standardized tests than students in any other state (though it appears everyone, regardless of their family’s income, got free brain food that morning).

Public schools are doing what they’re supposed to do

Kevin Mitchell, executive director of the Wyoming Association of School Administrators, takes issue with lawmakers who claim that Wyoming doesn’t achieve the results it should, given how much money the state spends on education.

“If you look across the state, Wyoming is the best in the nation at reducing the achievement gap,” he said. “We’re trying to bring our students who are below proficiency up to proficiency.

“That doesn’t mean we don’t focus on the students at the top, because we want all of our students to grow,” said Mitchell, who until last month was superintendent of Park County School District No. 1. “But a large part of the state’s [school] funding model is money that’s earmarked for students who are not proficient at grade level. So the NAEP results illustrate that the funding model Wyoming is using is doing what it’s supposed to do.”

“Teachers need to be able to afford a house where they work.”

The data show Wyoming’s schools have succeeded with the funding they’ve been allotted by the Legislature. But the state faces a massive budget shortfall in education resulting from busted mineral revenues—the newest estimate is a $250 million annual deficit, even after $55 million in cuts—and lawmakers seem to lack the political will to create new revenues to replace them.

If the Legislature cuts public school funding further, will Wyoming maintain the smallest achievement gap in the United States?  Will poorer students be able to keep up academically with those who have more financial resources if teacher staffs shrink, teacher aide positions are cut, and there is less money available in each district for computers and other vital learning resources?

“We know that the most important thing about closing that [achievement] gap is the effectiveness of the teachers, so being able to recruit and maintain the most effective teachers means you have to pay a competitive salary,” said Gregg Chase, superintendent of Johnson County School District No. 1. “Not only within the profession, but also within the community. Teachers need to be able to afford a house where they work.”

Overall, Wyoming’s 4th and 8th grade students—from every economic class—scored higher than the national average in both mathematics and reading. Students take the tests every two years—the 2017 NAEP report card reflects scores for the 2015 tests.

Mitchell and Chase said the NAEP results show that the state is doing precisely what the Wyoming Supreme Court has ordered the state’s public school system to do. It must, according to our State Constitution, offer equal K-12 educational opportunities to all students.

Wyoming is now rated seventh nationwide in spending per student, a total of about $15,800 per year. The next three states below Wyoming with the smallest achievement gaps—New Hampshire, Vermont, and Maine—also spend among the highest rates on their students. None of these states face the challenge of educating a population of students as radically dispersed and rural as Wyoming’s, which drives up our costs dramatically.

But Wyoming’s funding levels have already dropped over the past two years, and lawmakers who claim Wyoming doesn’t get enough “bang for its buck” in education are looking to slash more.

The National Assessment of Educational Progress (NAEP) defines the “achievement gap” as the measurable difference in academic performance between students who qualify for free and reduced lunches and kids from higher-income families who do not. Wyoming’s “achievement gap” is smaller than any other state’s.

Our top ranking in this category might be surprising considering the paltry amount the state invests in social services that typically benefit low-income families. According to the Urban Institute, Wyoming state and local governments spend just $141 per child annually on social services and income support. The national average is $519 per child.

In Wyoming, public education funding is effectively the only antipoverty funding there is.

If budgets are cut further, teacher layoffs and crowded classes are inevitable

“The long and short of it is this: We are not overfunded,” he wrote in a newsletter to his district’s employees. “We are properly funded through a cost-based model that ensures we offer an equal opportunity to a quality education throughout the state.

“While some are spinning stories about no bang for the buck, we are busy delivering greater proficiency, graduation rates and college and career readiness—in an increasingly rigorous assessment environment,” the superintendent added.

Kobza said due to the Legislature’s budget cuts, “at the very least class sizes will expand and programs could disappear in virtually every school in Wyoming. We’re trying to keep this from happening.”

But that will an extremely tough task. Don Dihle, business manager for the Campbell County School District, told Wyoming Public Radio that on top of the Legislature’s cuts, his district faces an additional loss in funding because its student population has dropped by almost 500.

Dihle told WPR that layoffs are inevitable. “Unfortunately the reality is that salaries and benefits make up 85 percent of our budget so the other 15 percent is difficult,” he noted. “We will cut the non-staff elements of our budgets but there is just a limit of how much you can cut on things like utilities and fuel and books.”

With many legislators opposed to tax increases of any kind, teachers, administrators and parents throughout Wyoming fear more budget cuts are coming their way. They are concerned that the high quality public education the state offers all students—no matter where they live or how much money their families make—will be greatly diminished by major school district employee layoffs that have already begun, in addition to fewer teaching resources available.

The Select Committee on School Finance Recalibration, a group convened to consider changes to the state’s school funding formula, will meet in Casper at the Wyoming Oil and Gas Conservation Commission building at 8:30 a.m. Tuesday, July 25.

While some legislators are hopeful the school recalibration will reduce the $250 million annual education shortfall, House Speaker Steve Harshman (R-Casper) told the House as the 2017 session closed that there’s no guarantee that education costs will actually be reduced after recalibration.

“They may even be higher,” he said.