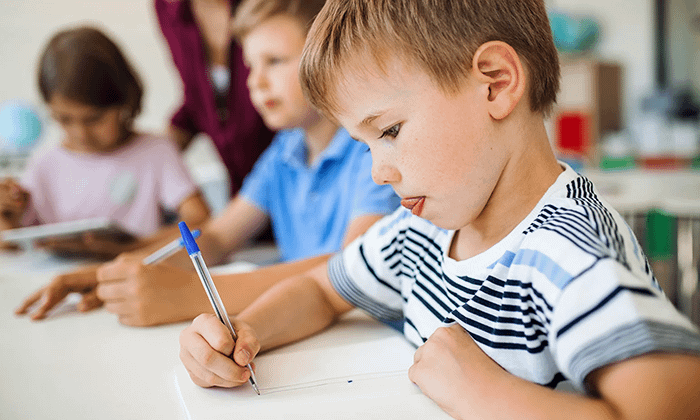 Bigger classes and less one-on-one attention are among the drawbacks of decreased school funding.

As the Wyoming Legislature winds down its 2021 session, whether—or, by how much—to cut public education funding remains the last and largest question.

Lawmakers began this session with a bill to cut school spending over the next three years by $250 million. That level of reduction would have closed schools across the state, crammed dozens of kids into classrooms, and sent hundreds of teachers looking for new work.

Those cuts—contained in House Bill 173, “School finance funding”—were dialed back by the House, which for the past half-decade has worked to protect Wyoming education from devastating funding reductions.

But during that same half-decade, the Wyoming Senate has remained gung-ho about slashing school funding. Once HB-173 arrived in the Senate last week, legislators there began reinstating many of the original cuts and adding a few of their own.

Senators also axed a key provision contained in the House version of HB-173: a half-cent sales tax for education that would go into effect if the state’s “Rainy Day Fund” dropped below $650 million. Its current balance is $1.2 billion.

Hanging over the entire process is roughly $300 million in federal funding earmarked for Wyoming K-12 education from the American Rescue Plan, the COVID-19 relief package recently passed by Congress.

Education advocates argue that this relief funding eliminates the need to cut Wyoming school budgets this year, since it provides breathing room for Wyoming lawmakers to tweak our tax structure so the state can continue to support quality public schools.

But opponents argue that this one-time fix is no excuse not to start laying off teachers and shuttering schools immediately, since the people of Wyoming would rather have mediocre education than pay any new taxes.

On Tuesday, the House voted to reject the Senate’s version of the education funding bill. A select group of veteran lawmakers from each chamber will now convene a “conference committee” to determine HB-173’s fate.

The result likely won’t be pretty.

Even the “education-friendly” House version of HB-173 contains $50 million in cuts to statewide education funding. But with the American Rescue Plan relief funds to provide backfill, Wyoming school districts would be able to nevertheless balance their budgets.

The proposed half-cent sales tax, at the current rate of spending on the “Rainy Day Fund,” would likely go into effect three years from now. It would provide a long-term, sustainable funding source for Wyoming schools.

But this reasonable scenario seems out of reach, thanks to the scorched-earth position of Senate leadership, who has been eager to cut the state’s school budget for years.

Senate Education Committee Chairman Charles Scott (R-Casper) led the Senate’s efforts this session. Upon the bill’s arrival before his committee, Scott proposed to immediately dispense with the half-cent tax before the bill ever reached the Senate floor.

“I don’t think we can get 16 votes [the minimum for passage] on the floor of the Senate on a bill that has a tax increase in it,” Scott said.

As a result, the Senate had only funding cuts at its disposal to balance the statewide school budget against declining fossil fuel revenues.

Scott will lead the Senate side of the conference committee to negotiate an agreement on HB-173.

Scott argued last week on the Senate floor that, by his calculations, Wyoming schools could absorb a 10 percent across-the-board cut without harming education.

A cut of just 7 percent would result “in 700 workers departing to other states.”

But Sen. Chris Rothfess (D-Laramie), a member of the Senate Education Committee, pointed out that according to school district estimates, a cut of just 7 percent would result “in 700 workers departing to other states” because of layoffs.

Members of the House anticipated that, after the Legislature’s cutting Wyoming school funding by more than $100 million over the past four years, further reductions would result in layoffs. So, the chamber voted to include a provision in HB-173 that requires the state superintendent of public instruction to report back to the Legislature how many school employees “involuntarily” leave Wyoming school districts.

Scott, however, possessing some kind of magical mathematics, said he didn’t think such a cut would result in any layoffs. “And I don’t know what you’d do with a report, unless you’re viewing education as only a jobs program and not necessarily educating the kids,” he said.

Of course, across Wyoming, school districts are large—and often the largest—employers in many communities, and layoffs will have ripple effects through their already struggling economies.

Along with cuts, the Senate version of HB-173 contains a major structural change in how Wyoming funds public schools.

Under the current model, which has been shaped not only by the Legislature but also by a series of state Supreme Court decisions, school districts receive “block grants” according to how many students they have, and according to a complex formula that determines how much money districts should need for the various costs of educating students.

Districts have broad flexibility to spend their “block grants” as they need them. Since the current funding model typically provides school districts below-market sums for teacher salaries, the districts end up using funds that were included to cover other costs—office supplies, for instance—to supplement salaries.

Under the Senate version of HB-173, teacher salaries would become set by the Legislature.

Teacher salaries are, by far, the largest cost to districts. And districts have latitude under the block grant system to meet the market demand for salary levels.

But under the Senate version of HB-173, teacher salaries would be removed from the block grant, and their levels would become set by the Legislature.

An amendment offered by Scott illustrated the problem: Currently, the statewide school funding model assumes that a starting teacher salary is $38,000. So, in an effort, Scott said, to “protect teachers,” he proposed to increase that amount to $40,000.

But according to the Wyoming Education Association, the current starting teacher salary in the state is actually $46,830. Districts fill in the gap between the model’s salary level and the market value of a teacher with money from elsewhere in their block grant.

Under the Senate version of HB-173, that would no longer be an option. And teacher salaries in Wyoming would become, like school funding, a political issue, determined by the whims of lawmakers rather than responding to the real needs of districts who need to retain quality teachers.

The best move on

Rothfuss reminded his colleagues in the Senate last week that the Legislature already cut the K-12 system by about $100 million over the past four years. Reducing it by another $100-to-130 million, he added, would do permanent damage to Wyoming schools.

“We can all say the sky’s not going to fall and that people are still going to be taught,” Rothfuss said. “We know that. There’s going to be an educational system. It’s just, do we want excellence, or do we want mediocrity?”

Shad Hamilton of Evanston, representing the Wyoming Association of Secondary School Principals, told the Senate Education Committee that school districts are prepared to make cuts, even though they’ve been difficult in recent years.

“But if those cuts are deeper than $100 million, we’re talking about significant cuts in staffing,” he said.

Hamilton urged legislators to hurry up and decide what they’ll do.

“We have districts out there that are waiting to hire teachers and principals because they don’t know what their budgets are going to be next year,” he said. “The longer we wait, the best people are going to move on.”

Depending on what happens during the conference committee on HB-173, the best people might be moving on anyway.