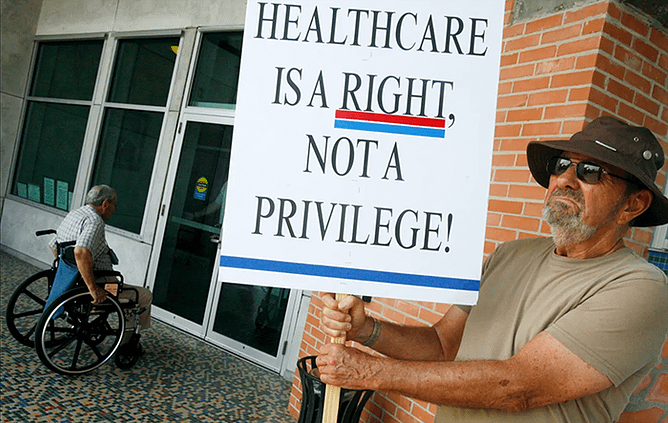 Efforts in support of Medicaid expansion in Wyoming are picking up steam.

Access to healthcare for 24,000 uninsured Wyomingites came down to a single vote this year.

The movement supporting House Bill 162, “Medical treatment opportunity act,” grew to an impressive swell during the 2021 session. The bill would have updated Wyoming’s Medicaid program to cover low-income adults under the Affordable Care Act.

Veteran legislators, including almost the entire Republican House leadership, switched their positions to support Medicaid expansion after years of opposing it.

When HB-162 passed the House, it was the first time in Wyoming’s history that a bill to expand Medicaid had cleared that chamber.

Increased federal funding—part of the American Rescue Plan—helped incentivize some lawmakers. Others finally acknowledged that they had simply failed for a decade to solve the problem of healthcare access in Wyoming, and here was a solution.

At the same time, a grassroots movement led by the Healthy Wyoming coalition worked feverishly to ensure lawmakers heard loud and clear that “the folks back home” supported HB-162.

They showed up in force, in person and via Zoom, at a meeting of the Senate Labor Health Committee on Wednesday morning.

A single Senator, Troy McKeown (R-Gillette), was the committee’s obvious “swing vote.” McKeown had already voted once in favor of an identical bill earlier in the 2021 session, which later died via a “pocket veto” in the Senate.

But the freshman lawmaker, who ran a right-wing campaign in 2020 to oust moderate GOP incumbent Michael Von Flatern, was by no means a sure bet to twice support a proposal that would help low-wage Wyoming workers.

Even at the first meeting when he voted “aye,” McKeown railed against “socialized medicine”—while also acknowledging he benefited from it as a patron of the VA.

After his initial vote, powerful elements of Wyoming’s right-wing political establishment descended upon McKeown, pressuring him not to repeat his mistake.

The Wyoming GOP, Wyoming Liberty Group, and others actively worked to rally opposition to HB-162.

When asked numerous times in person by another, local reporter whether his first vote was intentional, McKeown refused to answer.

He made no comment before casting his second vote on Wednesday, either—this time a “no,” ending HB-162’s prospects with a 2 – 3 decision in the committee.

The folks back home

The movement on behalf of affordable healthcare access in Wyoming made an impressive display on Wednesday.

Nevertheless, the breadth and depth of the crowd testifying on behalf of HB-162 Wednesday helped explain why the bill had made it as far as it had, despite the Legislature being further right-wing than at any time in recent memory.

It also indicated that, after several years of flagging, efforts to expand Medicaid in Wyoming are finding new breath.

Gerrits told the committee that the hospital loses millions of dollars each year from treating uninsured people who show up at the emergency room with illness or injury who have nowhere else to go.

“People are struggling. Having insurance through Medicaid could be the difference between getting back on their feet or being buried in medical debt for years to come.”

This, Gerrits said, is “the most inefficient way possible” for a community to provide healthcare to its residents. HB-162 would provide these folks insurance and stem the hospital’s losses.

Retired Gillette teacher Vicki Swenson said her community has been hard hit by coal mine closures. “People are struggling,” she said. “Having insurance through Medicaid could be the difference between getting back on their feet or being buried in medical debt for years to come, or for forever.”

Danielle Arnoux, a Sheridan single mother, told the committee she is ineligible for Medicaid under Wyoming’s current, outdated program, even though she only makes $12,000 a year.

“I am able-bodied. I work hard. I truly resent when people talk about how Medicaid is going to cause me to be too dependent [on government],” she said. “We live in the wealthiest country in the world, and I have to beg to get some kind of healthcare.”

But so, too, did groups that have not publicly supported the issue before, or at least not recently.

Deacon Mike Leman of the Diocese of Cheyenne told the committee he had testified years ago in favor of updating Wyoming’s Medicaid system. But he then waited quietly as lawmakers assured the public that they would find an alternative solution.

Not having found one, the Diocese has returned.

“I feel like life has become a partisan issue for us,” Leman said. “Two people may be diagnosed with the exact same medical problem that’s perfectly curable. One gets treatment, the other doesn’t.”

Arguments have gone back and forth this session about whether surrounding Mountain West states have fared well after updating their own Medicaid programs.

Dr. Ray Ward, a Republican member of the Utah House of Representatives, joined the meeting to tell the committee that, “Overall, it’s gone very well for us here in Utah.”

“Three years later the cancer came back and killed her. That might have gone differently if she’d had coverage.”

Ward said Medicaid expansion has been critical for keeping Utah’s rural hospitals fiscally sound. It has not the state’s budget, and it has basically done what it was meant to do.

The legislator-physician also recalled one of his own patients who, in her early 40s, lost her job and with it, health insurance. She got breast cancer, and though it went into remission, she couldn’t afford necessary follow-up treatments.

“Three years later the cancer came back and killed her,” Ward said. “That might have gone differently if she’d had coverage.”

Newcomers who spoke in favor of HB-162 also included the Wyoming Business Alliance, the Northern Arapaho Business Council, and the Wyoming Mining Association.

The diversity and breadth of the bill’s supporters suggests that, while HB-162 did not survive the 2021 legislative session, the movement to expand Medicaid in Wyoming is growing stronger by the day.