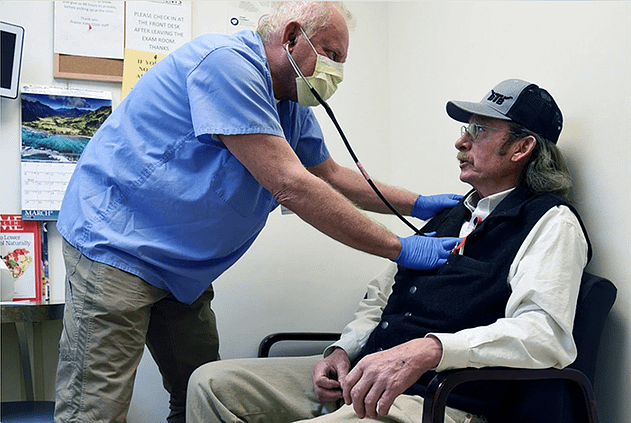 The additional federal funds would result in a long-term state revenue increase.

Over and over on Monday night, veteran lawmakers in the Wyoming House of Representatives came to the podium to tell their colleagues that they had voted against Medicaid expansion in years past.

But this time they would support it.

A combination of fiscal and emotional arguments won over the chamber during proceedings that stretched past 8 p.m.

At the end, House Bill 162, “Medical treatment opportunity act,” received initial approval from the House by a 35 – 23 vote, with two excused. If it passes its third reading on Wednesday, Wyoming will be closer than it has ever been to extending Medicaid coverage to tens of thousands of uninsured people.

Rep. Steve Harshman (R-Casper), a former Speaker of the House, said he’s voted against Medicaid expansion bills seven times in the past. But an incentive by Congress in the COVID-19 American Rescue Plan is too good to pass up, he said.

Under the Rescue Plan, the federal government would increase by five percent its Medicaid funding for states that choose to update their programs and extend coverage to low-income adults.

Currently, only disabled people, pregnant women, and others with similar obstacles to obtaining insurance are covered by Wyoming Medicaid.

A white paper by the Wyoming Department of Health says the increased federal funds would amount to $27 million a year for the state. That’s in addition to the 90 percent of the cost that the federal government covers traditionally for states to expand Medicaid.

Since Wyoming’s share of the cost would only be $10 million, Harshman said, the state will still save $17 million a year that it can spend on anything. This comes at a time when the Legislature is facing a budget shortfall and lawmakers are cutting funding from critical public services.

HB-162 also includes some trickery that would net Wyoming even more money in the long run.

The five percent increase in federal funds from the American Rescue Plan expires in two years. But HB-162 includes a provision that says Wyoming will drop out of the expanded Medicaid program if that happens.

“It’s an opportunity for us to say to the federal government, ‘We’re going to hold you hostage,’ in reverse.”

State lawmakers are aiming to pressure the federal Centers for Medicare and Medicaid into renegotiating the 50 – 50 rate it currently contributes to Wyoming for it’s “non-expansion” population.

“It’s an opportunity for us to say to the federal government, ‘We’re going to hold you hostage,’ in reverse,” Harshman said.

Wyoming’s 50 – 50 split for “traditional” Medicaid is one of the worst deals in the nation. Many states receive upwards of 70 percent in federal funds to cover folks who are disabled or otherwise qualify.

Rep. Andy Schwartz (D-Jackson) was the rare speaker on Monday who has always supported Medicaid expansion.

A self-proclaimed “numbers guy” and member of the Legislature’s Appropriations Committee, Schwartz said HB-162 would provide a $145 million infusion of federal funds to the state’s economy. That would come from the 90 percent of the cost the federal government would pay each year under the expanded Medicaid program.

“That’s big money, and it will ripple through our economy because it will generate [an additional] $4 million in sales tax revenue per year,” Schwartz said.

Schwartz said 60 percent of the people who would become eligible for Medicaid coverage are employed but uninsured.

“These are working poor,” he said. “What it means to them to get insurance is they will be more productive in their jobs because they can manage their healthcare better.”

The Wyoming Hospital Association estimates its members lose about $100 million from people without health insurance going to the emergency room. Those costs are passed on to everyone else in the form of higher medical bills.

Schwartz said Medicaid expansion could reduce uncompensated care at Wyoming hospitals by about $30 million each year.

Rep. Sue Wilson (R-Cheyenne) said she opposed Medicaid expansion in 2013, but she changed her mind two years later after talking to a woman whose hip problems had left her unable to work.

“She said, ‘If I even had Medicaid for three years and could get my hip fixed, I could go back to work,’” Wilson recalled. “People aren’t on the program forever; for some it’s a transition they need [for a short time].”

Wilson said during the past two years Wyoming couldn’t afford to pay its 10 percent share, so she voted against it.

‘If I even had Medicaid for three years and could get my hip fixed, I could go back to work.’

This year, she’s changed her mind again and believes the state would be “foolish” to turn down the federal funds.

“We’re turning our pants upside down, shaking it to get coins so we can put that money toward general funds,” Wilson said. “To just say we’ll shuffle our money off to education and let the rest of the state live in rags and bread crumbs, I can’t accept that.”

The folks at the soup kitchen

House Speaker Eric Barlow (R-Gillette) said he’s voted against Medicaid expansion multiple times, but he supports it this session because it will help people who have no access to healthcare.

Barlow said for the past 20 years he has volunteered once a month at a soup kitchen. The people he serves meals would benefit from Medicaid expansion. He ran off a list of their jobs—cleaning the local hardware store, cleaning the inside of oilfield tanks. None of these provided insurance.

“Every single one of them works,” he said. “I will vote yes this time because I haven’t seen any other solution. This opens up a much bigger door for folks. I don’t know what their options are except to go without [healthcare] or go to the free clinics.”

Monday was the final day for bills in either the House or Senate to be considered by the body. Those that didn’t make the cut automatically died.

Medicaid expansion was the very last bill on the schedule, but it almost didn’t happen.

Just before HB-162 came up, Rep. Mark Jennings (R-Sheridan) jumped up and demanded that a radical anti-abortion bill—HB-134, “Human heartbeat protection act”—be heard next instead.

Jennings and his colleagues in the far-right Freedom Caucus knew that the Majority Floor Leader Albert Sommers had announced that the House would adjourn at 7 p.m. So they plotted the unusual move at 6:50 p.m. as a way to sow confusion and attempt to run out the clock on the Medicaid bill.

But Jennings lost when Barlow ruled that the move could only happen if two-thirds of the members voted to suspend House rules. Only 23 members backed Jennings, dooming HB-134 and paving the way for the Medicaid expansion bill to be heard and approved.

Sommers announced that, even though it was past 7 p.m., the delay was obviously due to Jennings’ shenanigans, and that HB-162 would be heard.

Earlier in the day, Senate File 154, “Medicaid expansion with federal match requirements,” was killed when it wasn’t considered by the Senate by the deadline.