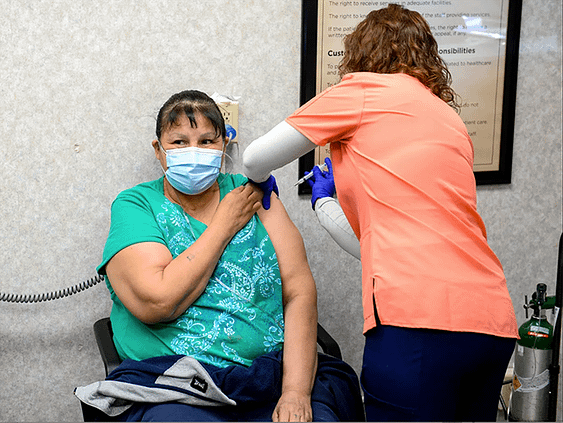 The Legislature cut $112 million from the Wyoming Department of Health during the recent session.

Ninety percent of the agency’s budget is “passed through” to local health clinics and hospitals, which  means these cuts will impact communities in every corner of Wyoming.

They will result in hundreds of eliminated healthcare jobs and diminished services, as well as decreased mental health and substance abuse resources. This is at a time when Wyoming’s suicide rate has once again topped the nation.

Overall, the Legislature cut roughly $430 million from the state’s General Fund budget in response to plummeting revenues from the fossil fuel industries.

The Department of Health absorbed more than a quarter of those reductions.

According to DOH deputy director Stefan Johansson, the health agency will also lose an estimated $25 million in “matching” federal funds from eliminating programs that were paid for partly by the state and partly by the federal government.

These healthcare cuts come despite the fact that, halfway through the 2021 legislative session, U.S. Congress approved the American Rescue Plan, which will grant $1.4 billion in federal relief funds to Wyoming. These funds are explicitly meant to help backfill revenue losses from the COVID-19 pandemic.

So, there was no urgent need for lawmakers to cut any funding from Wyoming healthcare. But the increasingly right-wing Legislature has become intent on eliminating public services, whatever the harm.

Meanwhile, Wyoming lawmakers rejected a number of proposals that would have replaced some of the lost fossil fuel revenues. None of the long-term revenue solutions presented this session—such as sales or property tax increases, or establishing a personal and/or corporate income tax—were meaningfully considered.

Cutting more than a hundred million dollars from public health during a pandemic might seem like a bad idea.

You know what else is a bad idea? Cutting tens of millions of dollars from community mental health and substance abuse centers in the state with the highest suicide rate in the nation.

As part of their budget slashing jamboree this session, legislators cut $15 million from community mental health and substance abuse centers throughout Wyoming.

The American Foundation for Suicide Prevention draws a direct link between lack of mental health services and suicide.

Meanwhile, outpatient mental health treatment—programs where people can stay in their homes but receive help—will be reduced by more than 80,000 hours. Outpatient substance abuse treatment will see a 15,000-hour reduction.

Without these resources, many people who suffer from mental illness will end up in county jails, where no treatment programs exist. This puts people who struggle with both mental illness and substance abuse—which is common—at serious risk of relapse, among other negative impacts.

The American Foundation for Suicide Prevention draws a direct link between lack of mental health services and suicide. According to AFSP, suicide is now the 7th leading cause of death in Wyoming, and nearly 70 percent of our communities lack an adequate number of mental health providers.

The Legislature’s cuts to the Department of Health’s mental health funding will certainly make this situation worse.

Hospitals and health clinics across Wyoming will feel these cuts’ impacts in the form of a reduction in the rate the state pays for Medicaid.

Wyoming splits the cost of Medicaid reimbursements to hospitals and health clinics with the federal government. This summer, Governor Gordon issued an executive order that reduced the state’s portion by 2.5 percent, which amounted to a roughly $11 million a year cut.

Sixty-five percent of Wyoming’s rural hospitals were already operating in the red.

DOH officials fear that Gordon’s action could lead to healthcare access problems, particularly in rural and frontier areas of the state. Providers already took a 3.3 percent hit in Medicaid payments in 2017-18.

This is largely the result of Wyoming’s refusal to expand Medicaid. Rural Wyoming is older, sicker, and poorer than the rest of the state, which puts an increased burden on rural health centers. When low-income people don’t have health insurance because they’ve been refused Medicaid coverage, they often go to hospitals’ emergency rooms for treatments. When they can’t afford to pay, the hospitals eat those losses.

The decreased reimbursement for Medicaid payments that hospitals do receive will only add to their struggles.

Programs to help elderly people stay in their homes, rather than being sent to nursing homes, were eliminated, as well.

The Legislature cut the entire $3.4 million budget of an elder care program in Laramie County, Wyoming PACE (Program of All-Inclusive Care for the Elderly). Its closure will result in more nursing home placements and job losses.

Another program that provides in-home care to seniors and developmentally disabled adults was temporarily saved. Home Care Services had been targeted for total elimination by Gordon’s proposed budget, but the Legislature restored its $2.7 million funding for the next fiscal year.

This is not a long-term fix, however, and the program remains imperiled. That’s because the funding this year was a one-time deal, instead a permanent part of the state’s Aging Division budget.

As with many things during the 2021 legislative session, lawmakers provided no real, sustainable solution to the issue of how Wyoming will provide resources to help its elderly population.

Wyoming lawmakers eye funding options for Medicaid upgrade
Scroll to top
Share this ArticleLike this article? Email it to a friend!
Email sent!