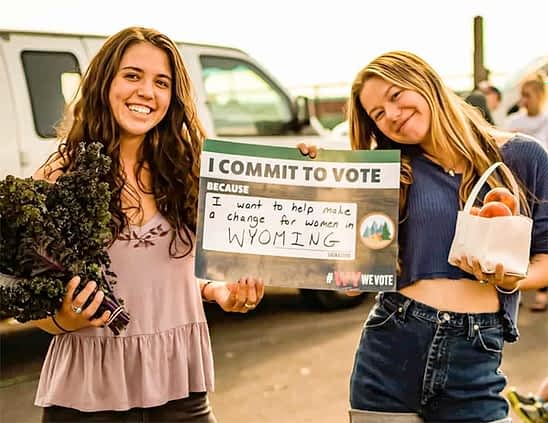 Online registration has increased youth voter turnout up to 20 percent in other states.

Wyoming, which has no known instances of voter impersonation this century, now has a voter ID law. Residents will have to present a valid ID from a list of approved identification types in order to vote in the next election.

Wyoming Republicans have been trying to pass a voter ID law for years, only to repeatedly fail. They finally succeeded in 2021 after wild, discredited claims of voter fraud spread nationwide, propping up the idea that voter confidence in the United States has been shaken by election abuse.

House Bill 75, “Voter identification,” was approved 51 – 9 in the House and 28 – 2 in the Senate, and signed into law by Gov. Mark Gordon. The Legislature’s super-minority Democrats, along with House Appropriations Chairman Rep. Bob Nicholas (R-Cheyenne), were the only lawmakers to vote against it.

Now that residents will have to prove who they are at the polls, there’s not much of an argument against online voter registration

Opponents of HB-75 expressed concern that Wyoming would pass a law that increases barriers to voting instead of laws that encourage access. Wyoming’s voter turnout rates are consistently in the lowest third in the nation, and the United States has among the lowest voter turnout of any major country in the world.

“The fear, uncertainty, and doubt sewn in the last election—we took that upon ourselves, we believed it, now we’re reacting to it in a way that reduces access, participation, and representation by the people of the state,” Sen. Chris Rothfuss (D-Laramie) told his colleagues.

But for people who want to see more people—not fewer—voting in Wyoming, the passage of a voter ID law might have a silver lining.

Wyoming is one of just a handful of states that does not allow residents to register to vote online—an increasingly popular method of registration that has been proven to increase voter turnout among young people and others who are traditionally underrepresented at the polls.

And what has long been the argument here against online registration? In Wyoming, you have to show your ID to register to vote, but until now, you didn’t need to show it at the polls. So, opponents argued, someone could falsely register to vote online and then cast a ballot as someone else!

Now that residents will have to prove who they are at the polls, there’s not much of an argument against Wyoming adopting online voter registration, a commonsense way to increase voter turnout, especially among young folks.

Voter ID laws tend to suppress turnout by 2 -3 percent, which can easily determine the outcome of a Wyoming election. And they do not affect all people equally. An estimated 11 percent of eligible voters in the U.S. do not have a form of identification required at the polls in their state. These voters are disproportionately low-income, people of color, the elderly, and people with disabilities.

“We need bills that ensure that voters choose their leaders, not the other way around.”

Rep. Andi Clifford (D-Riverton), a member of the Northern Arapaho tribe, said on the House floor this session that if it weren’t for the landmark federal 1965 U.S. Voting Act, which forbade racial discrimination in voting laws, she likely would have never been elected. Laws that govern voting, she told her colleagues, largely determine who ends up in power.

“We need to do everything in our power to encourage voting, especially with our young people, our new people, our people of color, and those less fortunate. The bill doesn’t encourage that,” Clifford said. “We want more people to participate, not less. By passing this bill, it unequivocally equates to voter suppression and imposes a restriction on voting access. We need bills that ensure that voters choose their leaders, not the other way around.”

Get out the youth vote

Changing Wyoming’s voter laws to allow online registration would not undo the harm of Wyoming’s new voter ID law, exactly. This is especially true in places with low levels of internet access, including the Wind River Reservation.

But it would be a step in the direction Clifford describes—more people voting, not less.

Wyoming is rightfully proud of its open-door voting policy that allows people to register to vote at the polls. You can just show up, register, and vote, all at once. It’s a good law. But it’s one that assumes a person is going to go to the polls in the first place.

When it comes to young people, in particular—and other demographics that are traditionally underrepresented at the polls—that is not a safe assumption at all.

People on all sides of the ideological spectrum lament that young people aren’t engaged in politics. But Wyoming is holding itself back when it comes to youth voter turnout by refusing to join the digital age of elections.

Arizona was the first state to adopt online voter registration, in 2002. Since then, registration rates for 18 to 24 year olds there have increased, from 29 to 53 percent. More than 90 percent of Arizona residents who register online actually vote.

This trend is not confined to the Grand Canyon State. Researchers have found that “pre-registration” in general—that is, getting someone registered to vote before they head to the polls—can increase youth voter turnout by up to 13 percent. In today’s digital world, registering online is by far the method that most appeals to young people.

Other studies show that states that reform their election laws to allow online registration see an increase in youth voter turnout of up to 20 percent.

In addition to encouraging young people to vote, online registration could benefit rural and working people in Wyoming.

“If you live far out of town, an online portal allows you to register any time of the day, seven days a week,” said Equality State Policy Center Acting Director Anastasia Marchese. “You don’t have to wait or take time off from work. It levels the playing field and makes voter registration accessible for anyone with Internet access.”

The Wyoming Legislature’s decision this year to limit voting in the state was clearly a response to national trends, offering a solution to a problem that does not exist.

The new voter ID law is unfortunate. But advocates of free and fair elections would do well to turn voter suppression lemons into lemonade by pivoting to support a proposal that would bring more Wyomingites to the polls.

Public health cuts hit communities across Wyoming
Scroll to top
Share this ArticleLike this article? Email it to a friend!
Email sent!