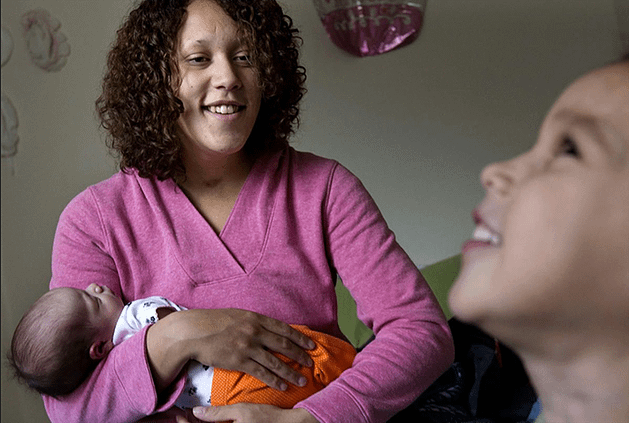 Nearly three-quarters of the people who would become eligible for insurance are young single mothers.

It’s hard to decide what the most jaw-dropping part was of the debate Wednesday morning in the Wyoming House.

Was it the fact that a bill to extend Medicaid coverage to low-income adults passed the chamber for the first time in history? Or was it the whoppers that desperate opponents told during the one-hour debate?

Members of the right-wing “Freedom Caucus” threw everything from an imagined budget apocalypse to class-shaming poor people to the evils of socialized medicine at the bill.

House Bill 162, “Medical treatment opportunity act,” passed 32 – 28. It now moves to the Senate, where it will likely be introduced next week.

As the House members entered the chamber Wednesday, each lawmaker found on their desk a slick-looking “report” about the horrors Medicaid expansion had wreaked in Montana.

Medicaid expansion has been a disaster for Montana was produced by the Florida-based, right-wing Foundation for Government Accountability, which flies its henchmen around the country to try to block states from granting folks healthcare access.

The problem is: The “report” is full of cherry-picked data and hyperbolic nonsense. A full 26 of the 28 legislators who voted against HB-162 chose sections of the Montana report to regurgitate at the podium during debate.

It wasn’t until near the end that Rep. Steve Harshman (R-Casper) walked to the mic and told his colleagues that, upon seeing the report, he went ahead and called the former Speaker of the Montana House to ask him what was true.

The Montana Speaker, Harshman said, didn’t like Medicaid expansion. But he said the report’s claims were bogus, and that in fact he had to admit the program had done Montana good.

“I said, ‘Did this bankrupt your state?’” Harshman related. “And he said, ‘No, it didn’t bankrupt our state. And it’s done a lot of good for our rural, critical access hospitals.’”

Harshman, a former House speaker himself, said he’s voted against Medicaid expansion all seven opportunities he’s had since it was first considered in 2013. But he supports it now, because the Wyoming Legislature has tried and failed to find any other solutions to the lack of healthcare access.

How we pay for it

“How will we pay for it?!” Reps. Chuck Gray (R-Casper) and Pepper Ottman (R-Riverton) each asked.

Ottman even invoked the horrifying specter of new taxes!

Unimpressed, Harshman explained precisely how Wyoming will pay for this.

HB-162 clearly spells it out. In the recently passed COVID-19 relief package, the federal government has offered a 5 percent funding increase for the 12 states that still haven’t updated their Medicaid programs.

The Wyoming Department of Health estimates that this 5 percent “bump” will add $54 million to the state’s General Fund over the next two years. The feds will guarantee paying 90 percent of the cost of covering the expansion group, leaving Wyoming to come up with $20 million for the two-year period.

That would give the state $34 million to spend anyway it wants to, Harshman said. “That’s how we pay for it.”

HB-162 includes a provision that would have Wyoming lock in that increased rate via negotiations with the federal Centers for Medicaid and Medicare services. Otherwise, the state can leave the program.

While supporters of HB-162 employed the use of facts and data, its foes leaned on their favorite boogeyman buzzword: “socialism.”

“I just hate to see us head down a socialist point of view,” said Rep. Mark Jennings (R-Sheridan). “In our culture today it’s kind of a rampage, and it’s got some very dangerous things.”

“I just hate to see us head down a socialist point of view. In our culture today it’s kind of a rampage.”

While such arguments can easily drum up “likes” on Facebook, they’re less effective on the Legislature floor.

Socialism, of course, is evil because it makes people lazy. And you know who else is lazy? Poor people.

Speaker after speaker sneered at the “able-bodied” adults who would qualify for Medicaid coverage and who would obviously take advantage of the program.

“When we talk about this concept of government-funded healthcare, we are going to create a monster and it will continue to grow,” said Jeremy Haroldson (R-Wheatland).

He said the Legislature would be creating “a golden handcuff that keeps people in poverty,” and then compared low-income workers to livestock headed to the feed trough.

A hospital is born

Sommers is a rancher who knows a thing or two about livestock and feed troughs. He said he’s received calls from his town’s mayor, the chamber of commerce, and health care professionals, all asking him to vote for HB-162.

He did. Sommers noted that at least 60 percent of the would-be Medicaid recipients work. But they are employed at low-wage jobs that don’t offer health insurance, and they don’t qualify for either Medicaid or subsidies from the Healthcare Marketplace.

Some, he noted, are simply too sick to work. Their only option is to seek care at emergency rooms. But since they can’t afford to pay, hospitals are hit with about $100 million a year in uncompensated care costs.

Rural hospitals have struggled for a decade across the United States, and many have closed.

Sublette County, Sommers’ home district, was until recently the only county in Wyoming without a hospital. But its residents voted in 2020 to create a new hospital district. Uncompensated care costs could easily tank the project before it gets off the ground.

The debate was full of whoppers, but likely none larger than one by Rep. John Bear (R-Gillette), who railed against the bill before proposing his solution to Wyoming’s failure to address the state’s lack of affordable healthcare access.

Bear said, simply, that people do in fact have healthcare!

“No one is going to go without needed healthcare. We are committed to providing that to our fellow human beings.”

“No one is going to go without needed healthcare. We are committed to providing that to our fellow human beings,” Bear said. He offered nothing to qualify his demonstrably false statement.

It was a real “Let them eat cake” moment—a politician so clueless and out of touch with the struggles of the people he represents that he thinks he can simply whisk their problems away with a set of kind words.

No one is taking Bear to the guillotine. But the people of Wyoming are growing sick of lawmakers offering nothing but lip service to the very real healthcare problems in the state.

Thankfully, Bear was in the minority. Most in the House recognized the problem and a potential solution.

Perhaps the Senate will, too.

Wyoming’s “budget crisis” is fake
Scroll to top
Share this ArticleLike this article? Email it to a friend!
Email sent!