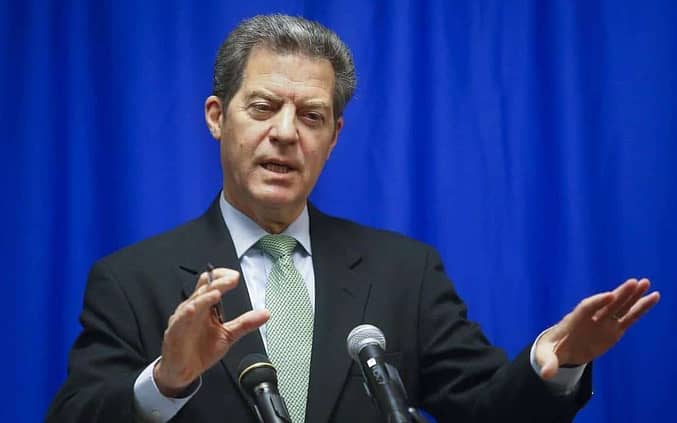 Kansas Gov. Sam Brownback attempts to stimulate the economy using The Force after his trickle-down tax cuts proved a complete disaster. Like Brownback, Wyoming lawmakers don't actually know how to use The Force and should avoid following his lead.

Facing a huge budget deficit, conservative legislators refuse to raise taxes to produce additional revenue and dig the state out of a hole. Efforts to recruit businesses have failed to diversify the state’s economy, and lawmakers start tapping reserve funds to keep state government running.

Meanwhile, even though its Supreme Court has ordered the state to provide equal educational opportunities for all students, lawmakers decide now’s the time to cut millions from education over the protests of voters.

Wyoming faces all of the above problems, but it’s not the state described here.

It’s Kansas, whose failed experiment in “business friendly” tax cuts could provide a lesson for Wyoming as we address our own budget crisis today—but only if lawmakers are willing to learn from another state’s mistakes.

A misguided promise to spur the economy

Republican Kansas Gov. Sam Brownback was convinced major tax cuts would, in his words, give “a shot of adrenaline into the heart of the Kansas economy.” In 2012 the GOP-controlled Kansas state legislature followed him like lemmings, confident they would prove that tax cuts—particularly for the wealthy—would be the key to Kansas’ prosperity.

But after five years of Brownback’s policies crippling the state’s infrastructure and services without helping Kansas’ economy, the experiment ended in June. It was a miserable failure by all accounts. Recently, a new coalition of legislators charted a new course of action and raised taxes on Kansas’ highest earners.

What a novel, progressive idea in one of the nation’s reddest states!

What lessons can Wyoming learn from the many embarrassing mistakes Kansas made? And how should we chart our own course in light of what Brownback called his “real-live experiment” in conservative policy?

The “Laffer Curve” comes to Kansas

The origin of Brownback’s experiment date back to 1974, when conservative economist Arthur Laffer gave birth to what is known as “supply-side economics”—also known as “trickle-down economics.” At dinner with Dick Cheney and Donald Rumsfeld—cronies of then-President Nixon—he scribbled on a napkin what became known as the “Laffer Curve.”

Laffer’s sketch illustrated the point at which higher taxes would supposedly hurt the economy enough to reduce the overall amount of revenue collected, while tax cuts could pay for themselves or even increase revenue.

The first true believers in Laffer’s tax cut theory were President Reagan’s economic advisers. They convinced the Gipper to try it for two years, but the results were predictably terrible, prompting Reagan to once again raise taxes. Far-right conservatives like Rush Limbaugh, who worship Reagan like a saint, conveniently ignore how supply-side economics tanked and have continually yammered for its return.

Laffer is an important part of the Kansas story because the state paid him $75,000 in 2012 for a three-day workshop to foist his theory on state legislators, who drank it up like free-market Kool-Aid. Laffer told a cheering crowd of Kansans that his plan would bring “enormous prosperity” to the state.

A disastrous suite of tax cuts

While Gov. Brownback failed to completely eliminate the state’s income tax, he convinced the Kansas legislature to dramatically lower taxes by reducing the number of income tax brackets in the state from three to two and slashing rates on both. The state projected a whopping $3.9 billion in cumulative tax cuts by 2019.

Brownback’s plan also entirely eliminated taxes on owner-operated businesses, known as “pass-throughs.” The governor promised business owners would reinvest the tax savings and expand their businesses. But what he actually did was create a loophole that allowed individuals to represent themselves as small businesses in order to qualify for the tax exemption. This resulted in massive tax avoidance, costing the state even more revenue.

Over the past five years, Kansas made significant cuts to infrastructure, Medicaid, education, Temporary Assistance to Needy Families, court funding, and other public services. To pay its debts, state government delayed payments to school boards and local agencies, canceled or delayed road maintenance, and put off payments to pension funds. When lawmakers convened in Topeka earlier this year, they were faced with nearly a $900 million shortfall for the next two years.

While Kansas’ public infrastructure and services crumbled, its economy imploded to the point that it’s bond rating was downgraded twice. While the rest of the nation was growing at a rate just above 2 percent, Kansas hit only 0.2 percent in 2016.

Far from delivering prosperity, Laffer’s supply-side taxes in Kansas resulted in a crappy economy and real damage to the lives of Kansans.

In 2015, when it was painfully obvious that cutting taxes for the wealthy wasn’t working, Brownback and the legislature did raise the state sales tax and cigarette tax. But it was far too little, too late, and the move just kept piling on the tax burden of the state’s poorest citizens. Sales taxes are regressive—low-income earners pay a much higher percentage of their paycheck on sales taxes than the rich, who tend to sock their money away in untaxed savings accounts and investment.

During Brownback’s five years in office, taxes were raised on the poorest fifth of Kansas’ residents by an average of $200 annually. The richest 1 percent saved an average of $24,600 per year.

With their public schools gutted and their economy stagnant, Kansas voters began to replace anti-tax Tea Party politicians with more centrist Republicans. This was essential to turning the situation around last month, when Democrats and GOP moderates joined forces in a veto-proof bloc to raise taxes. They increased the individual income tax rate on the highest earners and closed the “pass-through” loophole for businesses.

This recent Kansas tax increase is progressive, meaning it affects wealthier residents more than lower wage earners. A married couple filing jointly and earning $30,000 will pay an additional $120, which is 0.4 percent of their total income. A similar couple earning $100,000 will pay $755 more, or 0.755 percent.

Those new tax hikes, according to budget experts in Kansas, will raise an estimated $1.2 billion in the next two years, more than enough to make up the state’s current $900 million shortfall. It will enable the legislature to spend more on education and reverse spending cuts to major programs like Medicaid.

How will Kansas voters react to paying more in taxes? A May poll showed 59 percent support for solving the state’s budget crisis with either tax increases or a combination of tax increases and spending cuts. This is after voters by-and-large replaced Tea Party legislators with moderate Republicans during the last couple elections.

The Kansas poll results weren’t much different from a University of Wyoming survey last November that found 63 percent of respondents said they are willing to pay higher taxes. But the majority said they preferred increasing cigarette and alcohol taxes rather than ones that would raise a lot more money for Wyoming.

Wyoming residents are divided on the issue of establishing an income tax, which would go a long ways toward alleviating the dramatic unfairness of our current tax system. Most of Wyoming’s revenue comes from mineral taxes, but of the remaining portion, the lion’s share comes from sales tax. This results in Wyoming having the least fair tax structure in the United States, with the lowest 20 percent of earners paying a tax rate seven times higher than the richest 1 percent.

In the 2016 UW poll, 49 percent rejected the idea of an income tax, but 18 percent approved it unconditionally and 23 percent would accept a tax if another state levy, such as sales or property taxes, was reduced at the same time. The Wyoming State Constitution includes a provision that grants citizens a credit toward sales and property taxes in the event of a legislature imposing an income tax.

Unfortunately, Wyoming doesn’t need dramatic tax cuts to create a budget crisis and economic slump like Kansas’. We already have among the very lowest tax rates in the nation, with no income taxes, low property tax, low sales tax, and none of the wealth taxes—like capital gains and estate taxes—regularly found in other states. Our tax on beer—two cents per gallon—hasn’t been raised since Prohibition.

Roughly three-quarters of Wyoming’s revenue comes from mineral taxes, and since oil, coal, and gas are all in a downturn, Wyoming is already broke. Our education budget alone faces a $400 million annual shortfall, and that’s without factoring in building construction and maintenance. Since we’ve failed to diversify our homogenous economy beyond mining, our economy is already doing poorly.

Wyoming’s Joint Revenue Interim Committee is spending the summer reviewing Wyoming’s tax structure. At a meeting in Saratoga in May, the committee was supposed to go through a report by the Tax Reform 2000 task force, a group of economists and legislators who were dealing with Wyoming’s last budget crisis in the late 1990s. This bust was alleviated by the natural gas boom of the early 2000s, which saved lawmakers from implementing the committee’s number one recommendation: personal and corporate income taxes. The Revenue Committee declined to go over Tax Reform 2000 report at its May meeting.

At a meeting in Riverton last month, a state economist ran through a list of potential new taxes and tax increases, compared Wyoming’s rates to surrounding states, and explained what amount of revenues they might raise. But, privately, several Republicans predicted the panel won’t recommend any tax increases, even though that’s their main job for the 2017 interim.

What happened in Kansas was the result of an ill-conceived effort to substantially cut taxes in the hope it would spur economic development. No one besides the far-right kooks over at the Wyoming Prosperity Project, who have the best interest of their billionaire donors in mind, has remotely suggested tax reductions at a time when the state can’t afford to lower revenues.

But Kansas’ recent rebuke of Brownback’s tax cuts is a move Wyoming lawmakers should closely examine. Otherwise, if the Wyoming Legislature’s conservative leadership stays in power in the 2018 election and refuses to even consider raising new revenues, the state’s options are extremely limited:

— Wyoming could keep waiting for the minerals industry to rebound, which no one thinks will happen anytime soon.

— Like Kansas, Wyoming could spend all of its available reserve funds to keep state government operating.

— We could follow Kansas’ example of making major, unpopular cuts in public services and delays in building and maintaining infrastructure, including roads, bridges and sewer systems.

— Wyoming, like Kansas, could cut K-12 funds. Kansas reduced its education funding by $45 million; Wyoming’s cut for public schools was about $35 million this year, on top of $20 million last year. Like Kansas, however, Wyoming’s State Supreme Court has ruled repeatedly that a quality education for every Wyoming student is a constitutional right, and several school districts here are preparing to sue in the event of more cuts.

Many Wyoming legislators acknowledged during the last session that the state can’t just cut its way out of its budget woes—they must consider revenue-raising alternatives to provide necessary services. But legislators are already making highly questionable budget cuts, such as slashing $400,000 from suicide prevention and substance abuse treatment while rates for those problems in Wyoming are among the nation’s highest.

Lawmakers in Wyoming seem to view their constituents as mindless, rabid anti-tax zealots. But most Americans want some baseline public services, safety, and infrastructure, and they’re more than willing to vote out lawmakers who deprive them of those things.

Sen. Ray Peterson pretends to care about poor people (when it fits his anti-tax... 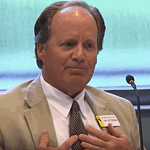 Thanks to Wyoming’s Constitution, a state income tax would raise significant...
Scroll to top
Share this ArticleLike this article? Email it to a friend!
Email sent!