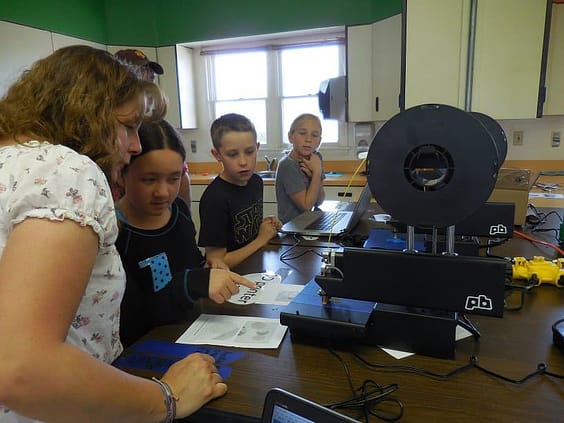 Students in Powell, Wyo., learn to operate a technological gizmo that we at Better Wyoming are too old to understand. Powell is one of the only places in Wyoming where students currently have access to computer science courses in public school.

Many Wyoming state senators finished last legislative session feeling confident that the cuts they’d made to public education were just a start.

For the second year in a row, the Senate had led a campaign to slash public school funding—$55 million in cuts over the past two years—and legislative leaders had convened a special “recalibration” committee to find more school funds to axe. 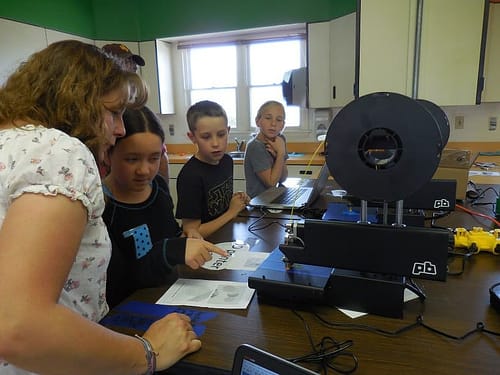 Students in Powell, Wyo., learn to operate a technological gizmo that we at Better Wyoming are too old to understand. Powell is one of the only places in Wyoming where students currently have access to computer science courses in public school.

We need computer science programs in schools across the state, they told the lawmakers. And we need to properly fund them.

“Technology is the new oil”

“What really blows my mind, and some of my peers’ minds in my age group, is that we’re having this discussion” in 2017, Fagan told the committee. The co-founder of Cheyenne-based Gannett Peak Technical Services said he’d learned computer science at his Maryland high school in the late 1980s.

“What happened in the last 30 years [in Wyoming]?” Fagan asked. “Obviously, somebody missed the boat in 1985.”

“Frankly, it was frightening to learn how behind we are on computer science,” Sweeney said. “It was a real wake-up call.”

Nearly a dozen people testified to suggest that, as long as the “recalibration” committee is tinkering with the state’s education system, it should formally add computer science as a subject Wyoming schools offer students.

“I’m a believer in computer science. Thank you for bringing this to us,” Sen. Hank Coe (R-Cody), the “recalibration” committee’s co-chairman, told the folks who testified.

“I think technology is the new oil,” Speaker of the House Steve Harshman (R-Casper) said.

How will we cut costs if we’re adding new programs?

Despite the fact that this special “recalibration” committee was convened to try and cut costs from Wyoming education, several lawmakers on the committee expressed doubt at their very first meeting that the process would save the state much—if any—money.

“In fact, by the time we’re through we may end up spending more money on education,” Harshman said.

He seems to have been onto something in the case of computer science.

On Thursday, the “recalibration” committee voted to draft several bills that would add computer science to the core areas of study taught in Wyoming public schools. If the measures pass during the upcoming 2018 budget session, they would almost certainly increase the amount Wyoming spends on education.

As a result, we’ll get to see whether the Legislature will vote to grant public schools the resources they need to prepare Wyoming’s children for the Digital Age, even in the face of a budget shortfall that will likely require them to raise taxes.

We’ll also get to see how lawmakers who have pledged to never support any tax increase explain why, in voting against funding computer science, they’re rejecting the business community’s input, opposing a commonsense means of growing and diversifying Wyoming’s economy, and refusing to support teaching Wyoming’s children an increasingly fundamental skill in contemporary life.

No fat left to trim

A somewhat embarrassing presentation by officials from the Wyoming Department of Education highlighted the difficulties of trying to offset the cost of computer science after the Legislature cut the education budget by $55 million. There’s just not much fat left to trim.

“Every student needs to understand how computers think,” Shanor said. “Knowing how technology works is absolutely essential to a proper education in the 21st century.”

“I’ve programmed a number of computer languages for 25 to 30 years, and other than the fact ‘computer language’ and ‘foreign language’ both have the word ‘language,’ there’s no relationship between the two,” Sen. Chris Rothfuss (D-Laramie) said, sparking some laughter.

Finally, the WDE officials admitted in embarrassment that they had not actually studied whether any of their recommendations would actually save the state money. They just figured they’d come with some suggestions.

“You have no dollar amounts to associate with any of these recommendations?” Rep. Cathy Connolly (D-Laramie) asked, apparently exasperated.

“Tax me, but don’t rob our children”

Luckily, someone had a novel idea of how to fund computer science, as well as eliminate Wyoming’s overall education budget shortfall: by paying taxes, just like every other state in America.

Karlee Provenza, a Laramie resident, submitted a letter to the “recalibration” committee’s official meeting record, and Connolly read a portion of it aloud:

“If you struggle to know where to find the money to pay for education, I’ll pay for it,” Provenza wrote. “I’ll pay state taxes on my income. Earning less than $20,000 a year, I would still love to pay taxes.

“I want children in Wyoming who have families that can’t pay for lunch to be able to go to school and have free lunch and breakfast, because I know how difficult it is to learn when you’re too poor to afford food.

“I want to pay taxes so even incarcerated people in this state can take classes, so they can leave prison with job opportunities, so they aren’t as likely to commit more crime.

“Tax me, but don’t rob our children. It will be us who will pay for them when they find it impossible to find jobs without proper education.”