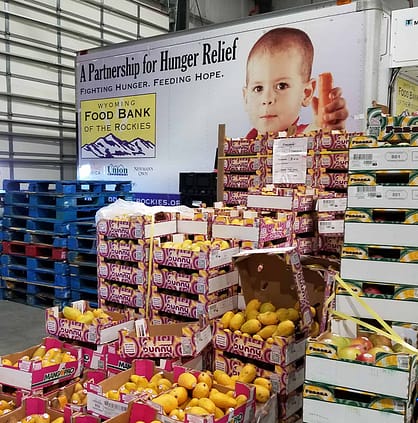 Fruit stacks up at the Wyoming Food Bank of the Rockies warehouse in Casper. If distribution problems arise, it will likely rot.

Rows of boxes piled nearly to the ceiling fill the Wyoming Food Bank of the Rockies warehouse headquarters east of Casper. Impressively, this entire inventory of food will turn over within five days, delivered to people in need throughout Wyoming by a crew of only three drivers.

But big, centralized charity outfits like this are still not able to feed Wyoming’s hungry. Across Wyoming, 13 percent of our state’s population doesn’t know where their next meal will come from, despite the best efforts of places like Food Bank of the Rockies.

One of the main problems deals with food waste. Nationwide, the U.S. Department of Agriculture estimates 40 percent of our food is wasted.

Victoria Ziton, communications and development manager for Wyoming Food Bank of the Rockies, said in states with bigger populations, food waste tends to result from grocery stores overstocking their shelves. 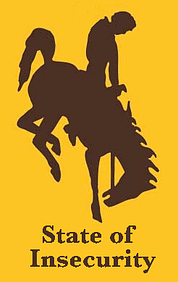 But, she said, distribution challenges across great distances are mainly to blame for food waste in the Cowboy State.

“For us, it’s more of a problem getting products into Wyoming,” she said.

The problem of food waste especially affects efforts to feed the hungry. Much of the food donated to anti-hunger outfits is secondhand or otherwise already getting old.

Big outfits like Food Bank of the Rockies can move tons of food, but it takes some doing.

Food sent to the Wyoming Food Bank of the Rockies is stored at the regional operation in Denver. It is trucked to Cheyenne, where drivers from Casper pick it up and transport it back to their hub station.

Food pantries and other hunger relief agencies in Wyoming put in their orders to get food from the Casper warehouse, at 19 cents per pound. The cost is kept low thanks to donations from individuals, companies and foundations.

Once an order is received, a warehouse crew gathers the food and drivers hit the road across Wyoming’s 98,000 square miles.

Unsurprisingly, perishable food is the most difficult to distribute.

“We assess if it can be sent [to food pantries] or if it has to go to the landfill or to farmers so they can feed their animals.”

Ziton said if her Wyoming office orders fresh fruit and vegetables but inclement weather prevents drivers from getting to Cheyenne, the quality of the produce quickly deteriorates.

“But we ordered it and have made a commitment to pick it up, so it comes to Casper where we assess if it can be sent [to food pantries] or if it has to go to the landfill or to farmers so they can feed their animals,” she said.

Food can be fine when it leaves Casper, Ziton noted, but if there’s a storm in Teton County and it takes several days to get there, “By then it’s really iffy.” Pantry staff and volunteers who have been certified in food safety to meet federal requirements have to determine if it’s fit for human consumption.

This would involve food pantries doing their own food pickups locally from grocery stores and restaurants instead of relying on Food Bank of the Rockies.

“If someone tells me they’ve got a truckload of food, I get the keys and I drive out there. I don’t have a board meeting.”

Budenske said Poverty Resistance’s pantry also gives food to anyone who wants it, which helps move perishable and other food faster toward its recipients.

“I don’t care who gets the food,” she said. “It’s either that or the balefill. You’ve got to get past the idea that we’re going to put your name in a computer, check your income, and if you’re employed you have to bring us a pay stub, because God help you if you have an hour of overtime [and have to requalify]. That doesn’t make any difference.”

She is also adamant that too many organizations worry about who gets the food and how it gets there.

“If someone tells me they’ve got a truckload of food, I get the keys and I drive out there,” she said. “I don’t have a board meeting.”

Jamie Purcell, executive director of Food for Thought in Casper, focuses on local solutions to feeding needy folks. This including growing and producing food closer to where people who need it live, which eliminates distribution challenges. For example, her organization operates a community garden and a kitchen where local outfits can prepare food.

But Purcell also said red tape hinders bigger charity anti-hunger outfits, and she agreed with Budenske’s approach of simply getting food to those who say they need it without filling out stacks of paperwork.

University of Wyoming Associate Professor Christine Porter joined Budenske in urging more communities to do local food rescue themselves, instead of relying on the Food Bank of the Rockies to do it for them.

“Wal-mart doesn’t have to pay disposal costs for 500 pounds of spinach that it gives to the food bank. But by the time it’s gotten there it’s brown gunk.”

“Those food banks essentially serve as free dumping grounds for [corporations’] resources,” Porter said. She added that the companies get huge tax write-offs for the food they donate.

“Wal-mart doesn’t have to pay for the disposal costs of 500 pounds of spinach that it gives to the food bank. But by the time it’s gotten there it’s brown gunk. It’s the food bank and the pantries’ job to get rid of it.”

Porter is an advocate of Wyoming establishing a food policy council to help eliminate this waste.

“I’m not saying it’s a bad idea to do these [corporate] donations or have these operations, but one thing I’d be interested in as a food council is if you’re rescuing food, it’s good food. The best of the food we have, and it’s not just about rescuing food that people don’t want.

“Have a wiser and more sustainable distribution that avoids waste,” Porter said.  “Make sure everybody gets healthy food. Rotten food isn’t healthy and neither are leftover Christmas Snickers at Easter.”

Want to improve Wyoming’s economy? Raise the minimum wage — STATE OF...
Scroll to top
Share this ArticleLike this article? Email it to a friend!
Email sent!