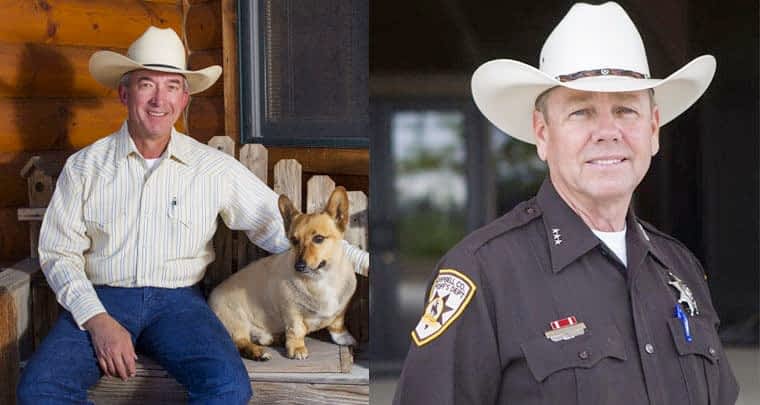 Wyoming Association of Sheriffs and Chiefs of Police director Byron Oedekoven (left) leads the fight against commonsense cannabis reform with his buddy, Rep. Bill Pownall (right) pictured here while he was a Gillette sheriff.

Should they believe testimony from law enforcement lobbyists about the wild dangers of hemp-based CBD oil? Or should they believe a neurologist and people who successfully use the extract for pain relief and other medical treatments?

Of course, they listened to the cops.

This is typical of the Wyoming Legislature. What do physicians and people who have a wide variety of diseases and medical problems know, other than the hemp extract—with a trace of THC—helps them and should be legal for adults?

Confusing bureaucracy for a harmless substance

The committee killed House Bill 100, which would have effectively legalized CBD oil in Wyoming.

CBD oil—or, cannadidiol oil—comes from hemp and contains no more than .03 percent THC (tetrahydrocannabinol). THC is the psychoactive ingredient in marijuana. 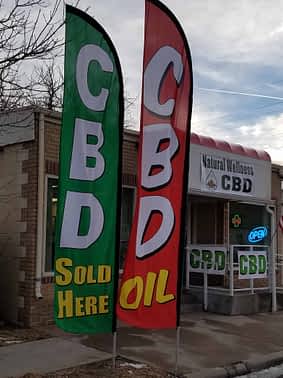 Since CBD contains so little THC, the oil doesn’t get a user high. But it can provide relief for patients with cancer, epilepsy, auto-immune disorders, and other medical conditions. Because it contains a tiny amount of THC, however, it is illegal to possess in Wyoming.

In 2015 the Wyoming Legislature approved the use of CBD oil for children with epilepsy, but only if a neurologist recommendeds it. The oil is not an FDA-approved drug and not considered “medicine,” so a prescription is not necessary. But parents must register with the Wyoming Department of Health to use CBD oil for their child.

CBD is available from some Wyoming retailers, which is confusing. Some carry only the oil that is pure CBD, with no THC. But other retailers have been found carrying the oil with .03 percent THC and have had to remove it from their shelves.

Felony charges for a harmless substance

House Bill 100 would have made CBD oil with a THC content no greater than .03 percent legal for all adults in Wyoming. The measure died on a 4 – 4 vote, with chairman Rep. Dan Kirkbride (R-Chugwater) not there to break the tie. Kirkbride has supported the CBD reform in the past.

“Some law enforcement agencies believe this is the evil demon killer weed,” said Rep. Stan Blake (D-Rock Springs), the bill’s sponsor. “But tons of people use it for chronic pain, to control migraines and arthritis … Let’s open this up to allow the citizens of Wyoming to have the freedom of choice to try this.”

“Some law enforcement agencies believe this is the evil demon killer weed.”

A California woman was arrested while driving through Teton County when police discovered a bottle of CBD oil that she used for chronic back pain. After she spent three days in jail, the felony charge was dropped.

Pelky said a father and daughter nabbed outside Gillette were not so lucky—they had to hire an expensive attorney who pled their felony charges down to first-time misdemeanors, which will remain on their criminal records.

Byron Oedekoven, director of the Wyoming Association of Sheriffs and Chiefs of Police, opposed HB-100 because, he said, “It says to heck with [the current law], let’s just have hemp for everybody.”

Rep. Bill Pownall (R-Gillette), a former Campbell County sheriff, said under the bill people could get CBD oil “from some producer who claims it is such and such, and it may not have the purity or the THC level or the pesticide or whatever—we don’t know because it’s not pharmaceutical-grade stuff.”

These hillbilly cops both consider any form and any amount of cannabis dangerous. Oedekoven’s organization runs the “There is NO DEBATE” campaign, which aims to shut down rational discussion about cannabis reform in Wyoming.

He and Pownall help lead the Legislature against any progress toward commonsense cannabis reform, even though nearly 90 percent of Wyomingites support legalizing medical marijuana (even with THC).

Erin Taylor of Cheyenne said she has an auto-immune disease that can cause excruciating pain. While doctors could prescribe medications that may be effective, they also come with severe side effects.

“I would like to have this choice,” said Taylor, who favors natural products. “My doctor is in Colorado. When I have to cross [the state border] when I go home, this is not an option for me.”

“I am not a stoner. I am not someone who is running off to get high.”

Dr. David Wheeler, a Casper neurologist and vice president of the Wyoming Medical Society, sent the committee an email supporting legalization of hemp products and CBD oil. “There does not seem to be much potential harm associated with them,” he wrote. “I cannot think of a good reason why the government should regulate use of these products.”

Nina Hebert of Cheyenne was diagnosed with epilepsy seven years ago. She said doctors have prescribed “the best medications on the market” but the side effects have caused kidney stones, nausea, hair loss, and joint pain. She decided to have someone drive her to Colorado to purchase CBD oil legally, and she rents a hotel where she uses the product.

“It’s an inordinate amount of time [and expense] for a state that prides itself on having a minimal government and allowing its citizens to exercise their actual freedoms,” Hebert said. “I am not a stoner. I am not someone who is running off to get high. I am a successful, educated person.”

Rep. Mark Jennings (R-Sheridan) chastised law enforcement and the medical community for not coming together to offer solutions. “There are people who need help, but I don’t personally believe this is the answer—to just throw open the doors and say, ‘let’s just turn it loose.’”

Pownall agreed. “This bill just says go out and use it, and I’m totally against that,” he said.

“The problem as I see it comes from Washington, D.C., where we have laws in place and a process by which medicines are researched and studied and licensed,” said Rep. Art Washut (R-Casper), a former police officer who now teaches criminal justice at Casper College. “And we’re just trying to bypass all of that.”

But Pelky cited the neurologist’s explanation that CBD oil is basically harmless, and questioned why the bill’s opponents were suddenly so eager to follow mandates from Washtington, D.C.

“Federal policy on hemp and marijuana in general is a jumble,” he added. “They classified both at one point as Schedule I drugs, which mean they have no value except for abuse, and that’s clearly not the case.”

For supporters of CBD oil with trace of THC, all is not lost with the defeat of HB-100.

House Bill 171, sponsored by Rep. Bunky Loucks (R-Casper), would legalize it in Wyoming now that the 2018 U.S. Farm Bill classifies hemp as an agricultural product, and not a controlled substance.

The bill has not yet been introduced but, we’re told, will likely be considered by the House Agriculture Committee.