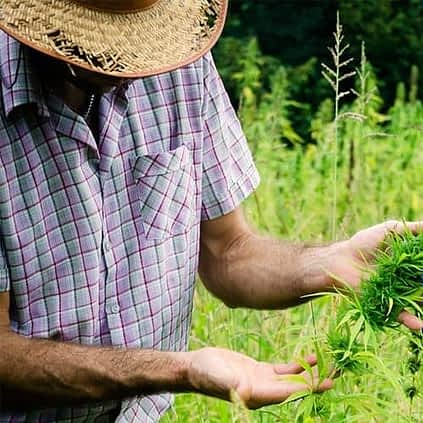 Hemp farming could be a lucrative industry in Wyoming.

Farmers, agricultural researchers, economic development, and law enforcement officials all testified Thursday in favor of an industrial hemp bill that could pave the way for a new lucrative crop for Wyoming.

It would also make legal CBD products, which are extracted from hemp. CBD can help alleviate pain for patients with a wide variety of diseases and medical conditions, including cancer, glaucoma, seizures, and auto-immune disorders.

The Senate Agriculture Committee approved House Bill 171 by a 5 – 0 vote. Previously, the House passed the bill 60 – 0.

It will now move to the full Senate for debate.

When U.S. Congress passed the 2018 Farm Bill in December, it removed hemp from being a Schedule 1 controlled substance—the same as heroin and cannabis—and classified it instead as an agricultural product. The landmark change means that industrial hemp with a THC content of no greater than .3 percent can now be legally produced, processed, and possessed under federal law.

For hemp and CBD to be legal in Wyoming, however, the Legislature must change its own state statutes. That’s the purpose of HB-171. The bill also calls for the Wyoming Department of Agriculture to submit a plan to the USDA, so Wyoming will have primacy over the hemp industry in Wyoming.

“It’s not like other states haven’t grown industrial hemp without the permission of the federal government.”

But Department of Agriculture Director Doug Miyamoto cautioned that Wyoming farmers can’t get too excited yet. In a conference call Tuesday, he said, the feds told all 50 states that the USDA is not ready to process any state plans.

“Once we submit a state plan, which I am preparing now, it will be out of our hands until the federal government processes it,” said Miyamoto. He added that Wyoming does not have any control over how long the process will take.

However, he said Wyoming could potentially operate a “pilot project” under the federal Farm Bill. The attorney general will have to be consulted, along with the governor, to determine the legality of such a move.

“It’s not like other states haven’t grown industrial hemp without the permission of the federal government,” Miyamoto said.

Not a single Wyoming state lawmaker has, to date, voted against HB-171. But that doesn’t mean it’s a done deal. The bill comes with a price tag—roughly $315,000—and it might have a tough time getting past the notoriously tight-fisted Senate.

“We’re not going to have a [USDA-accepted] plan accepted if we can’t even test it.”

The chamber might also pass the bill, but strip its funding, making it basically useless.

In order for Wyoming to actually launch a hemp-growing industry and legalize CBD products with trace amounts of THC, the state will need to purchase equipment to test the hemp and CBD products. That will allow officials to make sure the products are within the legal THC limits.

Rep. Bunky Loucks (R-Casper), the bill’s sponsor, said the funding is one of the essential parts of the bill.

“We’re not going to have a [USDA-accepted] plan accepted if we can’t even test it,” Loucks said.

The cost would also cover the state’s permitting process for hemp growers.

An industry waiting to happen

Brett Moline of the Wyoming Farm Bureau said his membership is “firmly in support” of the bill. Many producers, he said, are ready to invest in the hardy crop, which can be a profitable alternative to others grown in the state.

Brett Hess of the Agricultural Experimental Station—a research arm of the University of Wyoming—said scientists have been in “kind of a holding pattern” until the bill is approved and the state plan is accepted. But they are anxious to get started researching and helping farmers grow hemp in the state.

“Private industry is clamoring for this. Our agricultural community needs this.”

Matt Kaufman of ENDOW, the state’s economic development agency, said one company with an extensive sales and distribution network is anxious to be a Wyoming hemp producer.

Christine Bekes, executive director of the Powell Economic Partnership, said “private industry is clamoring for this. Our agricultural community needs this.”

Loucks stressed that there are many value-added products associated with hemp, including CBD oils, fiber, and food.

Byron Oedekoven, director of the Wyoming Association of Sheriffs and Chiefs of Police, said the law enforcement group backs HB-171. While he said the association has opposed other hemp bills in the past, when the U.S. Farm Bill changed the definition of hemp from a controlled substance to an agricultural product, it made all the difference.

“We’ve had some shipments from Colorado that were a little on the high side.”

“I’m excited about following the law,” Oedekoven said. He added that Wyoming could benefit from marketing its hemp in other states as being “a pure, clean product.”

But Oedekoven sought one unfortunate change that Senate Agriculture agreed to. The original bill stated that, if someone were found possessing hemp or CBD products with greater than the legal .3 percent amount of THC, they would be exempt from criminal penalties as long as the products’ labels said they were legal. Per Oedekoven’s amendment, consumers would be responsible to know they possessed only products within the legal limits, despite misleading labels.

“We’ve had some shipments from Colorado to Washington that were a little on the high side,” Oedekoven said, prompting some guffaws from the crowd.

Of course, neither hemp nor CBD can get a person high. But the Legislature loves a good cop joke.

Medicaid work requirements bill would dis-enroll 1,700 people in Wyoming, leaving...
Scroll to top
Share this ArticleLike this article? Email it to a friend!
Email sent!