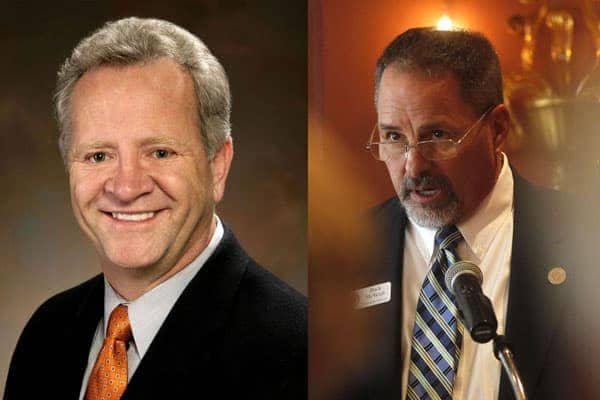 The rabid anti-tax bluster spewing from the mouths of lobbyists this year is so loud and obnoxious that even some of the most conservative state legislators on the Joint Revenue Committee have had enough.

A steady stream of lobbyists testified against proposed tax increases at a Revenue Committee meeting earlier this month in Cheyenne. Not a single member of the public testified, even though polls indicate popular support for several tax measures. 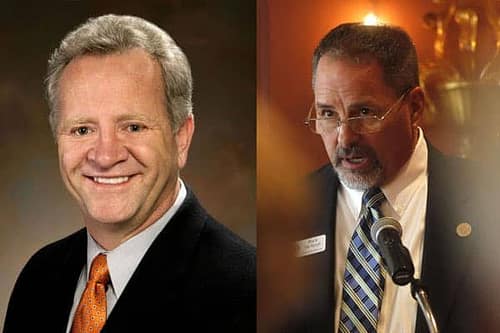 Lobbyists like Mike Moser (L) and Buck McVeigh (R) are full of excuses about Wyoming shouldn’t move away from its dependence on minerals. But they offer no answers.

Mike Moser, executive director of the Wyoming State Liquor Association, set the tone by doing what he always does when the committee proposes a tax increase on booze: he predicted utter doom for his industry.

He was particularly displeased when the committee voted to sponsor a so-called “sin tax” bill to increase the state’s maximum alcohol sales profits from 17.6 percent to 20.6 percent (which would amount to a small tax increase for liquor and wine).

Before the vote, Moser said the bill “would likely have devastating results, and I’m not exaggerating.” He predicted Wyoming consumers would drive in droves to Colorado to take advantage of its lower liquor prices.

But Revenue Co-chairman Rep. Mike Madden (R-Buffalo) said based on the state’s review of liquor prices in Colorado, Wyoming’s prices are significantly lower.

“So your argument about bootlegging liquor from other states is hollow,” Madden told Moser. “I don’t think the amount of harm that would come from this [markup bill] would amount to the catastrophic disaster you’re talking about.”

The committee defeated another bill that would have raised Wyoming’s beer tax, which is currently two cents per gallon. The tax hasn’t been increased since it was instituted in 1935 and is, unsurprisingly, the lowest in the nation.

“We’re going to be pushing up daisies and the beer tax will still be 2 cents per gallon,” Madden said. “That’s what happens when you have a tax that stays the same for 70 years.”

The committee vote in favor of sponsoring a bill that would increase cigarette taxes by $1 per pack. But it punted on the three major revenue-generating bills left: a sales tax on specified services, a sales tax for school construction and a property tax increase.

The committee will consider these bills at a meeting in late January, after the Wyoming Division of Economic Analysis releases its next prediction of how the state’s finances are looking amidst fluctuating mineral prices. By then, the consultants hired by the Special Committee on School Finance “Recalibration” will also have released its recommendations for tinkering with the state’s public school budget. These two developments will factor largely into the Legislature’s decisions to increase or create new taxes.

“Put a blindfold on us and have us throw darts”

Regardless of the CREG report and the “Recalibration” consultants, however, the glaring fact remains that Wyoming’s persistent money problems result from the state’s dependence on mineral taxes for roughly 70 percent of its revenue.

Revenue Committee co-chaiman Ray Peterson (R-Cowley) is a conservative legislator who has never been a tax advocate during his career. But in recent committee meetings he has stressed the need to make Wyoming’s tax structure more sustainable, predictable, and less prone to booms and busts. To do this, Wyoming needs some different sources of tax revenue.

Peterson pointedly told Buck McVeigh, executive director of the Wyoming Taxpayers Association, that McVeigh’s organization “cannot think for a minute that the 70 – 30 percent split between minerals and the [tax burden of the] average citizen in Wyoming is healthy.”

Having vast mineral resources is good for Wyoming, Peterson said. But it doesn’t result in a structurally sound budget.

“[How can we plan a budget] based on a commodity that’s market-driven, that’s estimated two years in advance?” he said. “I’ve told my constituents back home you might as well put a blindfold on us and have us throw darts.”

Peterson had made the same point about Wyoming’s unhealthy dependence on mineral taxes a month earlier to state Republican Party committeeman Charles Curley, who read a statement proclaiming that Wyoming doesn’t need any new taxes.

McVeigh, like Curley, admitted that he doesn’t have a plan to move Wyoming away from its dependence on minerals. Instead, he replied: “I think it was one of our late representatives who said, ‘We always manage to find a rabbit in a hat.’”

Rep. Jerry Obermueller (R-Casper) didn’t like that one bit. He joined his colleagues in expressing exasperation that the no-taxes-ever crowd has no plan to move Wyoming away from its mineral addiction.

“The impression I get right now is that the rabbit out of a hat solution is the only one you’re hoping for, that we don’t have to deal with the reality of where we’re headed,” Obermueller said.

He added that the state can’t keep bailing itself out by finding funds in the various “coffee cans” it has squirreled away through the years for emergencies: “These calls for us to stand down and not talk about any taxes is ignoring the looming problem we have at the end of our coffee can money.”

“We could have never won”

McVeigh said the WTA does not think raising taxes on alcohol or cigarettes is a good choice because “they target one segment of the economy” and they “pick winners and losers.”

“We never could have won with your organization,” she said. “If we had instead spent our time looking at a personal or corporate income tax or raising the sales tax by several percentage points, the argument would have been ‘those are regressive taxes and we’re against them.’”

McVeigh agreed that his organization basically opposes all taxes. But he also sheepishly conceded that, while Wyoming’s screwy tax structure makes it “nice to be able to live here … from a tax policy standpoint, we’ve got a lot of work to do.”

The chances that he or any of his lobbyist cronies are going to help do that work, however, are slim to none.

How to cut Wyoming’s education budget shortfall in half without raising taxes...
Scroll to top
Share this ArticleLike this article? Email it to a friend!
Email sent!