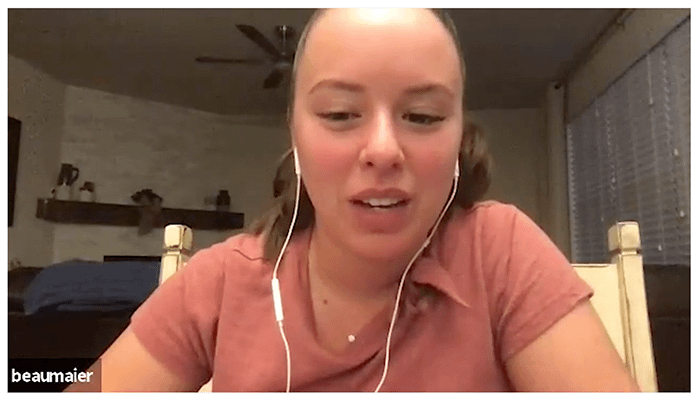 One of the spies, Sofia LaRocca, enrolled in the Better Wyoming Grassroots Institute.

Political spies hired by Wyoming Liberty Group founder Susan Gore targeted Better Wyoming in a yearlong covert operation to gather and weaponize information against the organization and its affiliates.

The spies, pretending to be supporters, participated in a number of Better Wyoming activities from October 2019 – September 2020. They also donated thousands of dollars to the nonprofit.

Meanwhile, the spies secretly recorded Better Wyoming staff members and associates in an ongoing effort to attack the group. The New York Times published a story this morning describing the spies’ activities.

The use of spies is an escalation of tactics by Wyoming’s political far-right, which already employs anonymous websites, purity tests, smear campaigns, and has secretly recorded Better Wyoming staff members in the past.

“The use of spies is pretty far out there, but so are many of the Wyoming Liberty Group’s ideas,” said Nate Martin, Better Wyoming’s executive director. “Wyoming’s far-right promotes tinfoil-hat conspiracy theories like Medicaid expansion causes abortion and cannabis is ruining the daycare industry. It makes sense that they would use spies to try to attack their opposition or uncover some imagined liberal plot.”

“Politics aside, it’s a disgusting thing to do to other people. But it’s clear the people who hired them doesn’t care about people to begin with.”

The couple had previously worked in Washington, D.C., targeting FBI agents on behalf of the national group Project Veritas. They received training for covert operations at a ranch near Cody owned by Blackwater founder Erik Prince, where Maier’s mother works as a cook.

Along with gathering intel, Maier and LaRocca sought to bait individuals associated with Better Wyoming into making statements they could secretly record and hand over to their clients. This is a common tactic of Project Veritas, which hires young people to make secret video recordings of their perceived enemies and then manipulates the footage to create damning—and often untrue—narratives.

Maier approached Better Wyoming posing as a military veteran suffering from PTSD who supports the legalization of medical cannabis. He infiltrated a coalition convened by Better Wyoming that advocates for cannabis reform. Members of that coalition recently launched a pair of ballot initiatives to update Wyoming’s cannabis laws.

Maier also made two donations to Better Wyoming of $1,000 each.

LaRocca—who at the time identified herself as Sofia “Cat” Deabreu—participated in the fall 2019 Better Wyoming Grassroots Institute, a multi-week course meant to equip Wyoming residents with skills and knowledge to build grassroots power and effect change in their communities.

Maier and LaRocca befriended Martin and his now-wife, Karlee Provenza, who was elected to the Wyoming House of Representatives in 2020. The two couples shared several meals, including one at Martin and Provenza’s home.

“The whole time, they were lying to my wife and me about who they were and what they were up to, and they were actively trying to get us to say or do things that could ruin our careers and hurt us,” Martin said. “Politics aside, that’s just a disgusting thing to do to other people. But, again, the people who hired them support policies that defund public schools and block folks from getting healthcare, so it’s pretty clear they don’t care much about people to begin with.”

It is unknown what footage Maier and LaRocca covertly captured. To date, none has been publicly released. In February 2020, a different spy affiliated with Maier and LaRocca secretly recorded Martin and another Better Wyoming staffer after an event at the Cheyenne Public Library. That footage was posted on a website, WyoRinoHunters.com, which is now deleted but can be accessed via the Internet Archive’s Wayback Machine.

It is also unclear whether the spies learned any information their clients would be able to weaponize. Better Wyoming has nothing to hide, Martin said, and the group has made its mark in part because of its willingness to make controversial statements that others shy away from in public.

The full scope of the spy operation remains unknown, despite the work of New York Times reporters. There remains plenty to be learned about the tactics Wyoming’s political far-right will use to attack its enemies and attempt to seize power in the state.