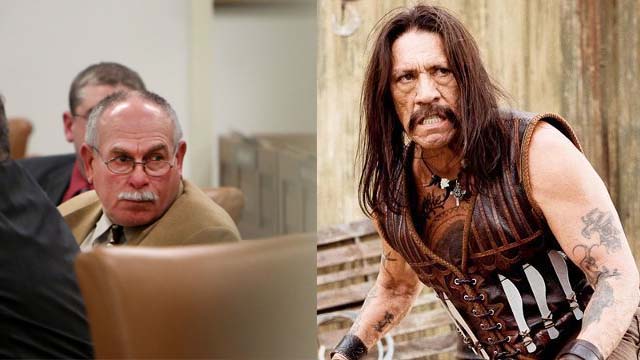 Rep. Roy Edwards checks over his shoulder to make sure no desperadoes are lurking in the House chambers.

An effort to allow the University of Wyoming Board of Trustees to make its own decision about people carrying concealed guns on campus was met with a resounding “No way!” by the Wyoming House on Monday.

The defeat of an amendment to House Bill 136, which would change current law to allow individuals with concealed carry permits to bring weapons on UW and community college campuses, disappointed university officials. They vowed to keep up the fight.

Rep. Roy Edwards checks over his shoulder to make sure no desperadoes are lurking in the House chambers.

“We think the example of local control is very important,” said UW Vice President for Governmental and Community Affairs Chris Boswell.  Rep. Dan Furphy (R-Laramie) said the amendment was extremely important to UW. He said trustees should have the option to decide if the board will allow guns on campus if HB-316 becomes law.

But Rep. Bunky Loucks (R-Casper), said, “As we all know, this amendment basically kills the bill.” Several House members said the decision should be made by the Legislature, which is elected, and not by trustees appointed by the governor.

The House approved both HB-136 and its companion bill, HB-137, in quick order. It took about 35 minutes for both to be approved by voice vote. The losing side could have called for a division on each bill to record how each legislator voted, but did not. That will happen anyway on the third and final reading of both bills, so there will be some accountability for their individual votes.

The House has had similar gun issues before it in many sessions and always passed them after arduous debates. This time the chamber followed the advice of Rep. Mike Madden (R-Buffalo), who did what he could to expedite the process.

“We always pass gun bills after about seven hours of debate,” said Madden, who added that such approval by the House is inevitable, so there was no reason to waste time discussing the bills. “No matter what you do, this bill is going to pass,” Madden said. “We could talk for another four hours about it, but [the Senate] will take care of what they think is right or wrong.”

HB-137, which would allow anyone with a concealed weapons permit to carry at any governmental meeting and the Legislature, wasn’t debated at all after the sponsor, Rep. Bo Biteman (R-Sheridan), explained the bill. It’s officially called the Wyoming Repeal Gun-Free Zones Act.

Before Madden’s suggestion to end debate, Byrd was able to declare his opposition to concealed carry on UW and community college campuses, which he called ill-advised. He reminded the House that the genesis of HB-136 came from the gun lobby and not the higher educational system.

“There are people in this body who are voting for this because there are outside influences that have threatened your re-election,” he told his colleagues. “Remember what is most important: It is the safety of the students and the operation of the university.”

According to sponsors, college is a dangerous place

Biteman, the bill’s sponsor, made it sound like students were sitting ducks without brave, gun-toting heroes around.

“People may think they’re safe, but they are not,” he said. “There are no metal detectors, no law enforcement presence.”

But what Biteman said isn’t true. The university has a full-blown police force of its own with about 15 officers, Boswell said. Community colleges also have their own security personnel.

“These folks are armed and trained for active shooting situations,” Boswell said.

Boswell said while the Senate has killed similar gun bills in the past, “There’s no reason to think that this one won’t ultimately be passed.”

Building on Biteman’s ludicrous characterization of schools as dangerous places where all students should be in fear, Rep. Roy Edwards (R-Gillette) inserted an anecdote into the conversation to remind everyone how effective guns can be in deterring bad guys—except the situation he described happened to his family members visiting Mexico and had nothing to do with Wyoming, universities, or anything else pertinent.

“He had a man who wanted to borrow some of his money from him, and [my relative] laughed at him and said he didn’t have any money, all he had was his billfold,” Edwards said. “And the guy said, ‘Well I’ll take that then.’ He laughed at him again. The other man said,  ’I don’t think you know what’s going on here.’ And the family member whipped out his gun and that man started crying. It was obviously the first time he had tried to do a robbery. He stopped right there and they waited for the police to show up, and justice was done.”

We’re hoping none of Edwards’ relatives take up scuba diving in the near future, or he might come back next session with a bill about how students at UW should study in shark-proof cages.

Two bills banning gun-free zones on campuses and at government meetings are set to sail through the House (HB-136 and HB-137). They must be stopped in the Senate.

Contact your local state senator and urge him or her to VOTE NO on both of them (not sure who your senator is? click here). Or, you can use this easy form to contact the whole legislature—you can only comment on one bill at a time using the form, so submit once for HB-136 and another time for HB-137.

Tips for writing your senator:

Be firm but polite

Introduce yourself as someone from his/her district

Make it personal—if you have pertinent experience, share it

Maybe mention: Colleges and universities oppose having weapons on campus and we should respect the people who run the institutions; no one on campus wants this; there are better things for the Legislature to be worrying about than whether someone’s Second Amendment rights are being infringed upon by not being able to take gun to school; colleges and universities have security forces and don’t need Rambo renegade gunslingers around; insert your own argument!