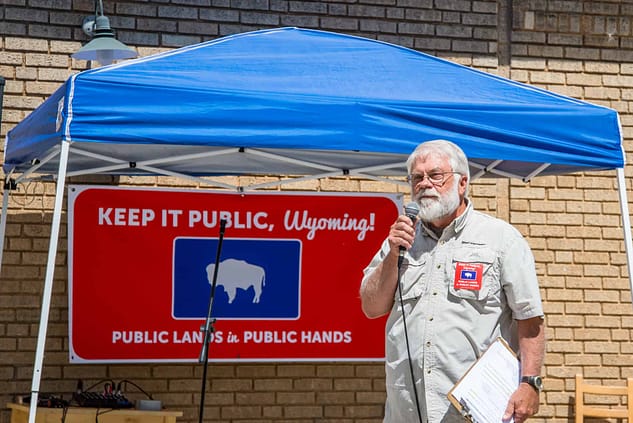 Earl DeGroot, head of Wyoming Sportsmen for Federal Lands, speaks at a 2017 rally for Public Lands Day in Laramie.

As the old saying goes: This is why we can’t have nice things.

Everyone in Wyoming loves public lands. What could possibly go wrong?

We learned the answer to that question during the 2018 Legislative session, when lawmakers hell-bent on ensuring Wyoming remains a petrol state suckling at the teat of mineral industries killed the Public Lands Day effort.

The drama that took place involved two groups: On one hand, you had folks who understand that public lands and outdoor recreation are critical to Wyoming’s culture and economy; and on the other hand were legislative dinosaurs who consider public lands useful only for the minerals they can extract from them.

The defeat of a public land transfer amendment

The story starts last year, during the 2017 Legislative session, when the “Keep It Public, Wyoming” coalition helped defeat a proposed state constitutional amendment that would have laid the groundwork for transferring federal public lands in Wyoming to the state.

After securing victory, “Keep It Public, Wyoming”—which is a coalition of mostly sportsmen’s and conservation groups—decided to embark on a proactive project for the 2018 session: to advocate for the creation of Wyoming Public Lands Day.

Wyoming Public Lands Day would be a means of raising that awareness that our cherished wide-open spaces might not remain public without a fight.

The group organized several rallies during the summer to build support for the holiday, and Sen. Leland Christensen (R-Alta) agreed to sponsor a bill to make Wyoming Public Lands Day law. Senate File 67 received an affirmative introductory vote of 27 – 2 early in the 2018 session.

It seemed like a slam-dunk. But Senate President Eli Bebout (R-Riverton) and his buddies had other ideas.

The idea behind creating an official day to celebrate Wyoming public lands originated from the land transfer fight. While people in Wyoming overwhelmingly value public lands, they also sometimes take them for granted. As the nationwide land transfer movement gained steam, sportsmen’s and conservation groups took action to alert citizens of the threat.

Transferring public lands to the state would result in people losing access to them. Wyoming couldn’t come close to affording to manage the nearly 30 million acres of federal public land within its boundaries—in fact, a study commissioned in 2016 by the Legislation said as much.

Wyoming has already sold off roughly 700,000 acres of the land it was allotted at statehood. Our constitution also mandates that the state turn a profit from the land it does own—primarily through selling and leasing it. There’s little doubt that if federal lands were transferred to Wyoming, public land would shortly become private. 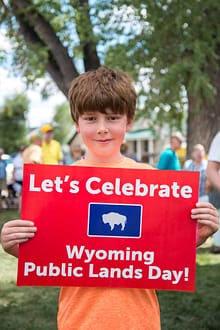 The “Keep It Public, Wyoming” folks recognized that they needed to raise awareness that our cherished wide-open spaces might not remain public without a fight.

Wyoming Public Lands Day would be a means of raising that awareness.

Senate President Bebout voted for SF – 67 on introduction. But he had a little trick up his sleeve: Instead of assigning the bill to the Travel, Recreation and Wildlife Committee, where it would normally go, he assigned it to the Rules Committee.

This would seem like a weird move, since the Rules Committee typically considers measures related to Legislative procedure. But here’s the thing: Bebout is the chairman of the Senate Rules Committee.

Bebout is also one of the Legislature’s biggest supporters of transferring federal public lands to the state As an oilman, he sees public land transfer as an opportunity to sidestep federal regulations enshrined by the National Environmental Policy Act (NEPA). Bebout was an ardent supporter of the proposed 2017 constitutional amendment that “Keep It Public, Wyoming” helped defeat. He was also one of the coalition’s primary targets, meaning that he personally received hundreds of calls and emails about the land transfer bill.

Adding “Multiple Use of” to “Public Lands Day” was Bebout’s way of lifting up his leg and pissing on the bill.

When SF-67 came before the Rules Committee, Bebout didn’t try to kill it. He simply offered an amendment: The holiday would not be called “Wyoming Public Lands Day,” but instead “Wyoming Multiple Use of Public Lands Day.”

The amendment and the bill passed out of the Rules Committee. The proposed holiday had a new name.

A sly amendment to forefront mining

To a casual observer, Bebout’s intentions might not have seemed apparent. But his message to the “Keep It Public, Wyoming” folks was clear: in the parlance of public lands, “multiple use” means mining, logging, grazing—and, if there’s room left over, outdoor recreation.

The “Keep It Public, Wyoming” group had meant for the holiday to celebrate outdoor recreation first and foremost. It was supposed to be something like the Hunting Holidays celebrated around Wyoming each fall, when so many parents pulled their kids out of school to go hunting that districts decided they might as well give everyone the day off.

Once news of the name change circulated around the Jonah Building, much discussion took place about how to move forward in advocating for the bill and changing its name back. But in the end, it didn’t matter, because “Wyoming Public Lands Day” faced one more obstacle: Rep. David Miller (R-Riverton), Bebout’s best buddy in the House.

As a geologist for oil companies, Miller is an ardent public land transfer proponent. As House Majority Leader, he had the power to decide which Senate bills the House would consider, and which it would not. He also had undoubtedly heard that the “Keep It Public, Wyoming” group had lined up a whole raft of state representatives who supported an amendment to cancel Bebout’s “Multiple Use” name change.

So, instead of allowing the House to consider and debate “Wyoming Public Lands Day,” Miller simply sat on SF-67 until the deadline passed for its introduction. He killed the bill with a procedural technicality.

Anything at odds with mining is the enemy

The saga of “Wyoming Public Lands Day” might seem insignificant in the grand scheme of things. After all, it’s just a would-be holiday.

But the story is important because it shows how a small cadre of mineral industry-connected lawmakers continues to thwart any effort, however trivial, that questions the dominance of oil, gas, and coal in Wyoming.

Outdoor recreation is emerging as an economic powerhouse—the industry generated $5.6 billion in consumer spending in Wyoming in 2016, along with 50,000 direct jobs and $514 million in state tax revenue. In terms of the United States’ national GDP, outdoor recreation is a more important industry than oil and mining.

But for outdoor recreation to thrive in Wyoming, the state needs open, accessible, unspoiled public lands. As long as mining interests want to lease, buy, and close off access to public lands, and want to eliminate regulations that keep mining operations from ruining wildlife habitat and otherwise despoiling the outdoors, the two industries will be at odds.

For lawmakers like Bebout and Miller, any industry at odds with mining is the enemy, and they’ll do whatever they can to crush it, regardless of what’s best for Wyoming.

Session recap: Another year, another effort to criminalize edible marijuana...
Scroll to top
Share this ArticleLike this article? Email it to a friend!
Email sent!