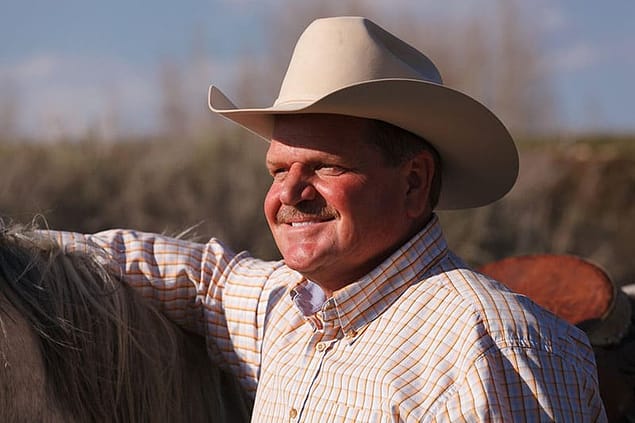 Sen. Leland Christensen is the sponsor of SF-74, which passed the Senate unchanged but has been heavily amended by the House.

[fusion_text]A series of amendments to a proposal that would severely punish pipeline protesters like those at Standing Rock has called into question whether the final version of the bill will satisfy both chambers of the Legislature and pass into law.

During its first two readings in the House of Senate File 74, “Crimes against critical infrastructure,” lawmakers in that chamber took out almost all of the fun things that led the Senate to overwhelmingly approve it 25 – 5.

These include an absurdly harsh million-dollar fine for any organization that “aids or encourages” protests of a “critical infrastructure” site, including oil and gas pipelines, mines and refineries. On Wednesday, the House spoilsports amended the fine amount down to 10 percent of its original: $100,000. This amount is still higher than any other fine the state imposes for a crime—including operating a meth lab booby-trapped for law enforcement.

One of SF-74’s fundamental outrages is that it criminalizes protests and can land protesters in prison for up to ten years. Most Senate members and many House members are apparently fine with this blatant, unconstitutional, unethical infringement on the right to free speech.

A House amendment sponsored by Rep. Tyler Lindholm (R-Sundance)—who’s a staunch advocate for the bill—is meant to placate concerns about First Amendment violations.

The amendment states: “Nothing in this section shall be construed to apply to picketing, public demonstrations or other expressions of free speech and association protected under the United States and Wyoming constitutions.”

Lindholm said the House has been flooded by messages from people concerned that the bill limits free speech rights.

“Yes, you absolutely have a constitutional right to protest,” Lindholm told his House colleagues. “You’ve also got an inbox full of emails saying ‘don’t block my constitutional rights.’ … Let’s put it in the bill. If it makes everybody feel better, great.”

But in a strange and unexplained move, Lindholm also plans to offer a third reading amendment Friday that would eliminate “picketing” from his amendment that passed Thursday.

The bill that the Senate passed wholeheartedly intends to punish protesters, and did nothing to address free speech concerns.

Sen. Leland Christensen (R-Alta) introduced SF-74 on behalf of the conservative think-tank that wrote it, the American Legislative Exchange Council. ALEC has sent the same bill to other states to use as model legislation, and the Wyoming Senate didn’t even bother to change a word.

But if the amended protest provision stays in the House version of SF-74 and it passes Friday, it could stir havoc among lawmakers from both chambers who would be tasked with hammering out differences between the House and Senate version. If lawmakers cannot reconcile their differences in the bill, the bill simply dies.

Other House amendments that might throw a wrench in the works deal with landowner rights. Several potentially dissenting votes in the House are ranchers who are concerned that SF-74 could give oil and gas companies a leg up in land-use disputes.

To ease landowners’ concerns that they could be guilty of a crime for alleged interference of critical infrastructure on their own property, the amendment states: “This section shall not apply to actions taken by a person, or an immediate member of that person’s family, while on land owned by that person.”

Before SF-74 passed second reading, Rep. Dan Furphy (R-Laramie) made a motion to table the bill for another day, which would have almost certainly doomed the legislation since the session is about to end.

Furphy’s motion was defeated, but only by a 30 – 25 vote. This shows the margin of support for the bill headed into Friday’s final decision is close, and supporters haven’t locked up a win.

SF-74 has been lobbied heavily by the oil and gas industry, which convinced two members of the House Minerals Committee to change their votes Tuesday after the panel appeared to have killed the bill on a 4 – 4 tie vote. The bill also has the strong backing of law enforcement groups around the state.

The controversial bill remains likely to pass the third reading of the House. But since the measure has so many critical changes upon leaving the House, whether the Senate and House conference committees can reach a consensus that will also be approved by both chambers in the short time before the session adjourns is somewhat in doubt.[/fusion_text]

House upholds Mead’s veto of pipeline protest bill, killing it for good (until...
Scroll to top
Share this ArticleLike this article? Email it to a friend!
Email sent!