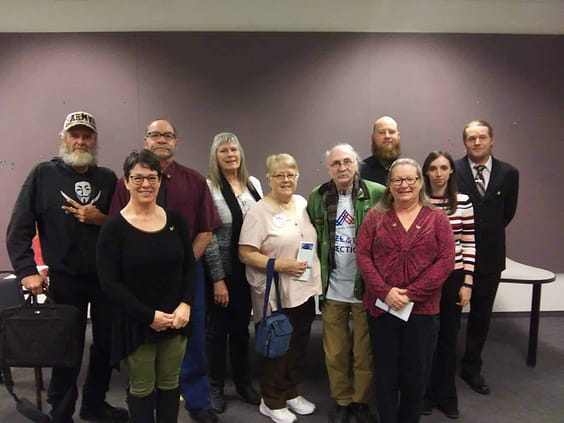 What do business owners, law students, military vets, and other citizen lobbyists have in common? They all want commonsense cannabis reform.

A group of “citizen lobbyists” came to the Wyoming Legislature midway through the 2019 session to speak with lawmakers about the medical benefits of hemp and cannabis.

The grassroots—no pun intended—day of action was organized by Wyoming NORML, with help from Better Wyoming.

More than a dozen people converged on the Jonah Building on a snowy day in early February, when roads in and out of Cheyenne were icy and even closed.

Many of the people who braved the elements did so because, to them, using hemp-based CBD and cannabis products had dramatically improved their lives. In some cases, it had saved their lives.

But more than a dozen others waited in the Legislature’s lobbies and hallways to share their stories with lawmakers in hopes of encouraging commonsense cannabis reform in Wyoming.

Many of the people who attended Wyoming NORML’s day of action spoke with lawmakers about House Bill 171.

This bill, which Wyoming Governor Mark Gordon signed earlier today, allows CBD oil and other hemp-based products to be produced, processed, and possessed legally in the state. It also set forth guidelines for hemp farming.

Aside from a temporary threat to its funding and last-minute opposition from law enforcement lobbyists, HB-171 sailed through the Legislature. This is largely because it conforms with federal law set forth in the 2018 Farm Bill, which was passed by the U.S. Congress.

But any commonsense cannabis reforms beyond federal law have stalled in the Wyoming Legislature, even as other states move ahead. This year, as in past sessions, a bill to legalize medical cannabis went nowhere. The House didn’t even vote on it.

CBD is not cannabis and, under HB-171, CBD products can only contain .3 percent THC—the psychoactive ingredient in marijuana.

CBD is used to relieve pain from many medical diseases and conditions, including cancer, seizures, glaucoma, and auto-immune disorders. One citizen lobbyist, Earl Janack of Cheyenne, is a military veteran who has arthritis. He has been using CBD oil—without THC—to ease his pain. He said that was the advice of his VA physician.

Janack is eligible for a hip replacement but said he isn’t ready for the procedure. Until trying CBD lotion and tinctures for his pain, he was taking ibuprofen. Janack said he wants nothing to do with opioids.

“When I wake up in the middle of the night and I’m in pain, I put some of the CBD lotion on and it works great,” he said.

Getting her life back

Some people view Wyoming’s new hemp law as the first step in educating lawmakers about the medical benefits of commonsense cannabis reform.

“Marijuana is about the only drug that stops my pain. I was on opiates for 15 years and it pretty much ruined my life.”

Rose Cain of Rawlins came to the temporary capitol at the Jonah Business Center to lobby for medical marijuana. She said doctors misdiagnosed her condition for 15 years before they discovered she has Lyme disease.

“Marijuana is about the only drug that stops my pain,” explained Cain. “I was on opiates for 15 years and it pretty much ruined my life.

“I have no memory of a couple years of my life because I was on such high doses for my pain,” she said. “I’ve had 22 surgeries because they didn’t know what was wrong with me. None of them worked, it just made my pain worse.”

Until Cain started self-medicating with cannabis, she hurt too much to work. Now, she owns two businesses in Rawlins.

“Everything I touched hurt,” she said. “I could hardly take showers because of the pain of having the water hit my skin.”

Cain said she never tried marijuana until she did it for medical purposes, at age 51.

“Now I’ve got my life back,” Cain said. “I can interact with my grandkids now. I can babysit them. [Before taking cannabis] I was always ‘out.’ Opioids just make you lethargic most of the time.”

“They left a bone chip next to my spinal cord, so now I was stuck to the opiates and all the other medications they kept throwing,” Satterwhite said. “The doctors kept saying don’t worry, you can’t get addicted, and we all know that’s a big lie.”

Now, Satterwhite is opiate-free, but she had to forego her doctor’s care because she refused to take the medication.

“Opiates can definitely kill you. They have my mother so strung out she doesn’t even get out of bed anymore,” Satterwhite said. “We need to fight for medical marijuana. Cannabis, you can’t die from that.”

Janet Cunningham of Cheyenne spoke with lawmakers about CBD’s positive effects on her arthritis. She also supports legalizing medical cannabis.

“The state should legalize it, regulate it, and tax it,” Cunningham said. “It’s been used for centuries throughout the world. I think Wyoming is just determined to stay in the Dark Ages.”

Legislature lags behind the people

Cain, Satterwhite, and Cunningham all said they would like to see a ballot initiative for medical marijuana.

“Lawmakers are not educated, which is frustrating because to educate yourself on this topic is very easy.”

They also believe voters would approve it. All three were aware of the recent survey by the Wyoming Survey and Analysis Center at the University of Wyoming that showed nearly 90 percent of eligible Wyoming voters support legalizing medical cannabis.

But the Legislature seems to be lagging far behind the people of Wyoming.

“[Lawmakers] are not educated, which is frustrating because to educate yourself on this topic is very easy,” Cain said. “There are over 20,000 studies out there on the benefits of medical marijuana.”

“They’re trying to make laws and telling [people] a gummy bear could wipe out an entire school of children,” Satterwhite added. “It’s just such a big lie.”

“I think it would pass if they left it to the people,” Cunningham said.

NORML attempted to get enough signatures to put medical marijuana on the 2018 general election ballot but fell short.

Satterwhite said the organization would love to launch a petition drive for 2020 “but it takes about $70,000 to do it. Our group runs on our own funding and a few donations we take in.

“It’s pretty much out of our pockets to do. But we are not going to stop,” she said. “We’re going to keep coming.”

A new Wyoming law terminating parental rights of rapists is flawed to the point...
Scroll to top
Share this ArticleLike this article? Email it to a friend!
Email sent!