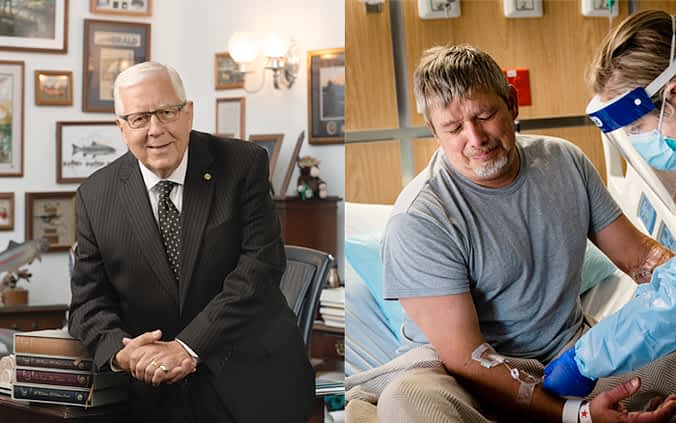 RIP Mike Enzi. You got far better treatment than most of us could hope for.

Across Wyoming, people are offering memorials and kind words for former U.S. Senator Mike Enzi, who died after a recent bicycling accident near his home in Gillette.

These memorials, of course, are appropriate for a long-serving politician. But as we reflect on Enzi’s life and service, we might also reflect on what the circumstances of his death mean for the rest of us—including the yawning gap between the medical treatment he received and what is available to many Wyomingites.

For instance, while Enzi was whisked away to the hospital by an ambulance, Wyoming lawmakers have defunded counties to the point that many struggle to maintain ambulance services.

Enzi’s experience at the Gillette hospital, on the other hand, was quite typical for Wyoming patients. After years of state health budget cuts and divestment, the facility lacked the resources to treat Enzi’s injuries. So, it shipped him out of state.

As we remember U.S. Senator Mike Enzi and his service to Wyoming, we should also remember that these healthcare inequities are the direct result of politicians’ decisions.

A review of the events leading up Enzi’s death helps us understand.

The ambulance that comes too late

A bystander found Enzi, 77, unconscious sometime after the accident on Friday, July 23. He had suffered a broken neck and broken ribs. Thankfully, an ambulance promptly arrived.

At least 10 Wyoming communities are in danger of losing their ambulance services.

Meanwhile, in growing portions of Wyoming, people who suffer severe injuries like Enzi’s might wait for an ambulance that comes too late.

Governor Mark Gordon and the Wyoming Legislature have handed down severe budget cuts to counties over the past several years as fossil fuel revenues have declined. Wyoming counties tend to rely on state funding to support ambulance services.

In May, Washakie County’s all-volunteer ambulance service shut down when it ran out of money. Commissioners scrambled to maintain services in the county, partnering with Cody Regional Hospital and setting up an ambulance outpost in Worland.

Other counties, like Fremont County, have privatized their ambulance services, hoping to save public money. But last spring Fremont County’s private provider declined to renew its contract because it wasn’t profiting enough. No other companies stepped up to replace them for months, until a new provider finally agreed to do the job—albeit one that a commissioner described as maybe “not so good.”

At least 10 Wyoming communities are in danger of losing their ambulance services. For thousands of Wyomingites—and visitors to a state where tourism is the second largest industry—counting on an ambulance after a life-threatening injury like Enzi’s is a shaky proposition at best.

Upon Enzi’s arrival at Campbell County Memorial Hospital, healthcare workers wasted no time rushing him to treatment. For many people in Wyoming, however, the decision to go to the emergency room is a tougher choice.

Tens of thousands of Wyoming residents lack basic health insurance. Most of these folks work jobs that don’t offer employer-based coverage, and they don’t earn enough to afford insurance through the federal marketplace.

In most of the rest of the United States, people in this situation are covered by Medicaid. But Wyoming lawmakers have refused to update our state’s Medicaid program under the Affordable Care Act, leaving roughly 30,000 adults without any coverage. For this population, a trip to the emergency room results in debt collectors knocking on their door for years.

According to a new study by the American Medical Association, people who live in states like Wyoming that have refused to expand Medicaid hold a disproportionate amount of the nation’s $140 billion in medical debt.

Unsurprisingly, the lawmakers who have blocked Wyoming residents from obtaining Medicaid health insurance are rarely among those indebted.

Patients and dollars fly out of state

The most familiar aspect of Enzi’s Wyoming healthcare experience is that the hospital to which he was admitted did not have the resources to treat him, so he was flown out of state.

After doctors in Gillette were able to stabilize him, Enzi was transported to the UCHealth Medical Center of the Rockies in Loveland, Colorado—a trip that would have cost an uninsured person between $25,000 and $75,000.

UCHealth is a public healthcare provider and part of the University of Colorado hospital system. Regularly ranked among the best hospitals in the nation, the Medical Center of the Rockies is a major economic driver for Colorado.

Wyoming lacks anything like this, and lawmakers have made it clear that they have little interest in changing that. This is despite the fact that our residents export millions of dollars for medical services each year to other states.

In fact, Wyoming lawmakers consistently block and cut funding for healthcare services, eliminating our healthcare industry’s chances for growth. Each year Wyoming has refused to expand Medicaid, for instance, has meant that hundreds of millions of dollars in federal funding have been kept from our community hospitals and health clinics.

Wyoming residents export millions of dollars for medical services each year to other states.

Meanwhile, the current downturn in fossil fuel tax revenues has prompted Wyoming lawmakers to defund the state Department of Health. Ninety percent of that agency’s budget passes through to local health centers, so the budget reductions are passed on to them, as well, forcing them to cut staff and services.

Today, Wyoming has fewer medical professionals per capita than in the 1960s.

Despite what you might feel about Mike Enzi as a lawmaker, it’s appropriate to memorialize longstanding public servants.

But it’s also appropriate to contrast the treatment Enzi received with the overall state of Wyoming’s healthcare system—counties that can’t support ambulance services, hospitals that lack resources to treat patients, and tens of thousands of uninsured people for whom an ER visit means crippling debt—and demand our remaining lawmakers do better.

County clerks: The puppetmasters of Wyoming redistricting
Scroll to top
Share this ArticleLike this article? Email it to a friend!
Email sent!