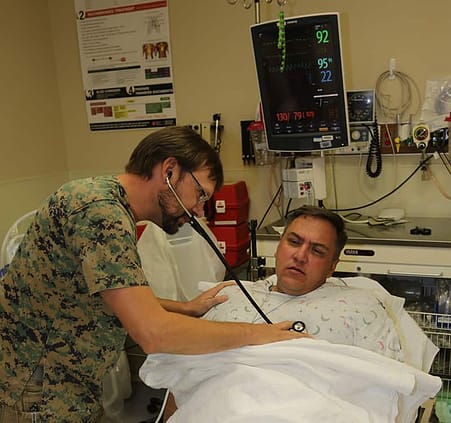 A patient receives treatment at SageWest medical center in Riverton, which has discontinued services as a result of staffing difficulties.

You can’t have a baby in Riverton—not in a hospital, anyway.

SageWest, the for-profit company that runs Fremont County’s two hospitals, discontinued obstetrics services in Riverton in 2016. The move was supposed to be temporary, but after struggling for two years to recruit OB/GYN doctors to the area, SageWest gave up.

Riverton women simply have to get themselves to Lander once the birth pangs start.

Granted, a half-hour drive to the next town is nothing to get excited about for most people in Wyoming (except when the roads are dangerous or closed). Plus, a 30-minute trip to the hospital isn’t uncommon in urban or suburban areas, either, especially with traffic.

But the loss of maternity care in Riverton is part of a disturbing trend in Wyoming, where many rural areas have seen healthcare services and physicians slowly dwindling over the course of recent decades.

This decline results in more than just fewer health services for Wyoming residents. At a time when Wyoming’s fossil fuel mining industries are all busted, without a boom on the horizon, the state dramatically needs to diversify its economy.

But developing new industries and attracting new businesses to places like Riverton—and across rural Wyoming—is going to be tough when communities can’t offer basic healthcare services.

As more and more businesses are able to set up shop anywhere in the nation, why would they move to a place where you can’t even have a baby at the hospital?

Hospitals are typically the biggest employers in small towns that are lucky enough to have them. In addition to obvious clinical jobs, they also employ skilled workers for things like building maintenance, legal support, recordkeeping, and social work.

All of these things add value to a community, making it an attractive place for economic development.

Unfortunately, when hospitals are not in good shape, they contribute far less.

“Companies are rarely attracted to relocate to a community with little or no health care.”

According to Wendy Bruce, CEO of Western Healthcare Alliance in Grand Junction, Colorado, economies suffer when healthcare services decrease, or when people have to leave a community for treatment.

“Decreasing services or closing a hospital stunts the community’s economic growth,” Bruce says. “Companies are rarely attracted to relocate to a community with little or no health care.”

When hospitals begin to face financial trouble, recruitment is one of the first expenses cut.

According to Wyoming Hospital Association Vice President Josh Hannes, many hospitals in rural Wyoming have decreased or ceased efforts to recruit physicians, and particularly specialists, because of a lack of resources.

Wyoming, whose healthcare system ranks 42nd in the United States, already has among the lowest rates of physician access in the nation. According to the Wyoming Department of Health, counties like Niobrara, Hot Springs, Big Horn, and several others actually have fewer physicians per capita today than they did in the 1960s.

We also have a dramatic shortage of nurses.

When hospitals and health centers cannot invest in recruitment, they have a difficult time attracting and retaining physicians and other trained staff, which leads to an inability to offer services—such as in Riverton.

It also means there are simply fewer people in a community who have the resources to contribute a great deal to economic growth.

In Wyoming, problems with our medical system hurt economic development in other ways, as well.

Notably, the high cost of healthcare discourages businesses from setting up shop here, since employers tend to be on the hook, in one way or another, for providing employees health insurance.

After the Wyoming Legislature failed during its most recent budget session to expand Medicaid or do anything else to address this issue, Casper entrepreneur Jared Stack, who has launched several successful businesses in the state, took to Twitter to ask if lawmakers had any other plans or ideas.

“Is there anything else on the [Legislature’s] agenda that tackles health care/insurance costs in Wyoming?” Stack asked. “Not saying medicaid expansion is the answer, but Wyo is becoming an noncompetitive state to do biz in because of health costs.”

The answer, sadly, was no.

Many have been helped in recent years by a not-so-secret tactic: expanding Medicaid.

Medicaid expansion has generated 6,000 new jobs and $350 million in personal income each year in Montana since it began in 2016.

In both these states, Medicaid expansion has injected hundreds of millions of dollars in federal funding into state healthcare systems, creating jobs, spurring growth, and—critically—bolstering the economies in rural communities.

According to a report by the Montana Healthcare Foundation and Headwaters Economics, the program has generated 6,000 new jobs and $350 million in personal income each year since its inception in 2016.

Utah’s program is too new for its economic impact to be certain, but the benefits to healthcare industries are widespread across the nation. The Louisiana Department of Health, for instance, says expansion has led to $3.5 billion in economic activity, and created more than 19,000 jobs.

And in Utah, whose program rolled out as COVID-19 crept in, Medicaid expansion ensured that hospitals would not have to eat the costs of treating patients who lacked health insurance.

In Wyoming, it’s common for small hospitals to lose $5 – 10 million each year providing “uncompensated care” to people who can’t afford to pay for it.

The path toward economic diversification in rural Wyoming is unclear. Many challenges and uncertainties exist.

But what’s crystal clear is that the health of our rural hospital system will be critical to success. Strong healthcare systems support strong economies, and the inverse is true, too. Faltering medical infrastructure hurts communities.

Expanding Medicaid is an obvious way to help protect Wyoming’s rural healthcare system, as it has been proven effective in many other states. It would bring hundreds of millions of dollars of federal funds into Wyoming, which would help communities grow and diversify their economies.

But the Wyoming Legislature has repeatedly refused the program, despite offering no other solutions to shore up our healthcare system.

This inaction is typical for our “leaders,” who seem content to sit and wait for the next mineral boom to save us.

But another boom isn’t coming, and Wyoming can’t wait around as our rural hospitals and communities deteriorate. We need action to fix our healthcare system, and soon.

FIVE FACTS: Wyoming embraces mail-in voting (sort of)
Scroll to top
Share this ArticleLike this article? Email it to a friend!
Email sent!