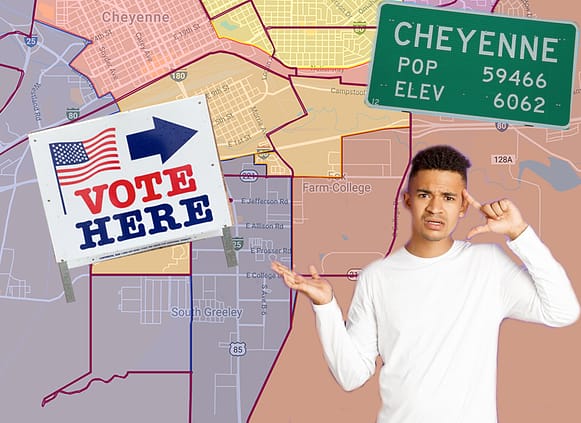 "What is this mess?"

For months, residents of Southside Cheyenne have fought during the “redistricting” process for better representation in the Wyoming Legislature.

Their efforts seem to be paying off, but the struggle continues.

Earlier this month, the Legislature’s Joint Corporations Committee approved a proposed new voting district map with greater representation for Southside Cheyenne, a racially diverse—and historically underrepresented—area whose population has grown over the past 10 years.

But as the “redistricting” debate began in the Wyoming House on Wednesday, those gains were under threat.

An amendment to the voting map contained in House Bill 100-Redistricting of the Legislature divided Southside Cheyenne into four House districts, splitting the vote of its largely Latino and blue-collar population, lumping it together with large swaths of rural, white Laramie County.

The amendment, brought by Rep. Shelly Duncan (R-Lingle), was met with general favor in the House, since it cleaned up some disagreements between rural counties up and down the eastern edge of the state.

But the map’s treatment of Laramie County and public outcry from constituents prompted stiff criticism from several Cheyenne lawmakers.

Rep. Bill Henderson (R-Cheyenne) pointed directly to Southside Cheynne, where many residents’ families have lived for generations without adequate representation.

“We have a lot of established neighborhoods as the city has developed over the years,” Rep. Bill Henderson (R-Cheyenne) said. “I’m very concerned about the diversity and equal treatment of various ethnic backgrounds.”

“The [district] lines are awfully contorted there,” Wilson said. “I’ve heard from people who are not in my district who don’t like what has happened to them.”

“I’m very concerned about the diversity and equal treatment of various ethnic backgrounds.”

Duncan’s amendment ultimately passed “first reading” on a voice vote, but only after an agreement to scrap the Laramie County portion of her proposal and allow that county’s delegation to redraw it.

Laramie County legislators will bring their own amendment to Duncan’s amendment on Thursday, during “second reading” of the redistricting bill.

The map must ultimately pass three readings before proceeding to the Senate.

A growing movement for representation

While most of rural Wyoming has shrunk over the past 10 years, urban areas like Cheyenne have added people—and Southside Cheyenne is one of the fastest-growing, most diverse areas in the state.

Despite its being a distinct community of interest with its own cultural heritage, Southside Cheyenne has been gerrymandered over the past decade.

Today, the area is split between four House seats. Only one of those is occupied by a Southside resident—Rep. John Romero-Martinez (R-Cheyenne).

The map passed by the Joint Corporations Committee earlier this month consolidated the area into just two House districts, effectively doubling the prospects that Southside residents would have seats in the Legislature.

This consolidation came as a result of consistent pressure during the redistricting process from Southside voting advocates on Laramie County’s delegation.

Duncan’s amendment eliminated that improvement, once again splitting the south side between four House districts.

Duncan’s amendment immediately drew the ire of grassroots organizations like the Wyoming Independent Citizens’ Coalition (WICC), which has led the fight for better representation for Southside Cheyenne.

The group recently fought for—and won—a dedicated seat on the Laramie County School Board. It has taken the lessons learned from that effort to the “redistricting” process.

“Our ask is to have two House seats and one Senate, therefore not splitting the Hispanic and blue collar votes.”

WICC members attended each of the local Laramie County community forums about redistricting and provided testimony at several Joint Corporations Committee meetings over the past several months.

In partnership with Better Wyoming and a coalition working on behalf of fair voting districts across the state, the Southside organization has increased its reach and ability to affect the conversation at the Legislature.

The redistricting discussion continues Thursday afternoon in the House. On Friday, the chamber is scheduled to cast its “third reading” vote on a final map, and then send it along to the Senate for further deliberation.

The House and the Senate must ultimately agree on the new map, which will be in place for the next decade.