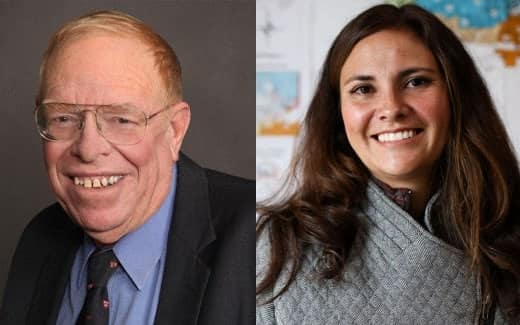 The Wyoming constitution forbids cuts of the magnitude that Charles Scott (L) and Affie Ellis (R) want to see, so they want to change the constitution to make their cuts legal.

A pair of proposed amendments to the Wyoming State Constitution that would gravely impact public schools passed a Senate committee on Tuesday.

As the 2018 Legislative budget session proceeds through its second week, the amendments are two of the most radical—but hardly the only—means by which the Senate is attempting to defund Wyoming public schools.

Other proposed measures in the Senate aim to cut more than $100 million from Wyoming public education over the next several years. That level of cutting would unquestionably be unconstitutional in Wyoming, which guarantees every student in the state access to a quality education.

So, the Senate hopes to change the state constitution to make their cuts legal. If the full Legislature ultimately passes the amendments, they’ll appear on the ballot for voters to decide whether they should become law.

The good ol’ days of inequity

Senate Joint Resolution 3, sponsored by Sen. Charlie Scott (R-Casper), would affect the way Wyoming funds school construction and major maintenance. It would revert the system to the way it was “back in the good ol’ days” when each school district was responsible for paying for its own buildings via local property taxes.

The Wyoming Supreme Court declared this system unconstitutional in the mid-1990s—in what are known as the “Campbell Decisions”—because it violated the constitution’s “equity” clause. That clause states that each Wyoming student must have equal access to education. The problem the court found with the old local funding system was that students in rich school districts would have fancy new buildings to learn in, while students in poor areas would have shoddy, old schools.

“The founding principal of the Campbell decisions was equity,” Schroeder said. “This amendment would lead to inequity across the state. Run-down, dilapidated buildings don’t give kids opportunity.”

Scott argued that his proposed amendment would not render Wyoming’s school construction funding system unconstitutional thanks to one clever provision: Any school district that was too poor to fund construction at the state’s average level would get help from the Legislature, which would “equalize up” those districts.

But this stopgap funding measure for poor districts doesn’t address the equity problem described in the Campbell cases—rich school districts will still offer students much better opportunities thanks to superior facilities, even if poor districts are brought up to “average.”

Perhaps Sen. Scott, a blue-blooded gentleman rancher from a long line of Harvard graduates, is confused about what “equity” means. He doesn’t seem to ever have put much thought into the concept, and he’s certainly never had to worry about it himself.

Regardless, the Senate Revenue Committee approved the bill and sent it for further consideration to the full chamber with a 3 – 2 vote. Sens. Peterson (R-Cowley), Dave Kinskey (R-Sheridan), and Cale Case (R-Lander) approved it.

“The Judiciary cannot command the Legislature to raise taxes”

The other proposed amendment also flies in the face of the Campbell decisions, which, along with demanding equity, also oblige Wyoming to offer quality education.

In the decisions, the Supreme Court stated that the Legislature must fund public schools adequately in order to provide quality education, even if it means raising taxes.

Sponsored by Sen. Affie Ellis (R-Cheyenne), Senate Joint Resolution 04 would remove any obligation by the Legislature to raise taxes in order to fund public schools. Should it become law, the Legislature could simply use whatever money it has lying around to fund education, not matter how inadequate the amount.

Senate President Eli Bebout (R-Riverton) initially assigned this proposal to the Senate Education Committee. But after learning it didn’t have the votes to pass there, he sneakily reassigned it to Revenue, where he knew it would be approved.

Sen. Ellis is one of a number of new, younger archconservatives in the Legislature who opposes taxation on principal, regardless of how badly our public services and infrastructure become damaged as a result defunding.

She explained on Tuesday that the point of her amendment was to tell the Judiciary that it “cannot command the Legislature to raise taxes” to fund schools.

Even lawmakers are subject to the law

In response to Ellis’ proposal, Revenue Committee member Sen. Jeff Wasserburger (R-Gillette) stated the obvious: The Wyoming Legislature is so rabidly opposed to taxes that, if this amendment became law today, legislators would simply erase the current $250 million annual shortfall in the education budget by cutting $250 million from public schools. Such a move, he said, would be disastrous—for kids’ education, obviously, but also for the fact that it would immediately eliminate about 3,000 jobs in the state.

Brian Farmer, executive director of the Wyoming School Board Association, pointed out that the amendment’s aim of allowing the Legislature to bypass the Supreme Court would upend the system of checks and balances upon which American democracy is built.

“Everyone, including lawmakers, is subject to the law,” Farmer said. “As Alexander Hamilton wrote in the Federalist Papers, the Judiciary’s role is to ensure the Legislature remains a servant to the Constitution, not its master.”

“This amendment ultimately endangers the future of our state.”

Before Bebout reassigned SJ-04 to Revenue to ensure its passage, the Senate Education Committee briefly considered the amendment.

At its meeting on Monday, the Education Committee heard testimony from a single citizen: Bridger Bogus, a senior at Cheyenne’s Central High School.

Bogus’ testimony delved into legal questions of the amendment, but was also an eloquent rhetorical argument from a young person defending his rights. Here’s an abbreviated version of Bogus’ statement:

Senate Joint Resolution 4 ultimately amends the Constitution to eliminate the ever-so-important action of judicial review. I know that everyone here understands the importance of education. It’s not only a fundamental right for students in Wyoming, but it’s also a cornerstone of the further success of Wyoming as a state.

The amendment’s language makes it both unconstitutional and detrimental to public education. As a student, citizen, and newly registered voter within this great state, I will not support this amendment and neither will my fellow students within the public education system.

By undermining the rights of students, the independence of the students, and the overall systems that our government relies upon, this amendment ultimately endangers the future of our state.

Wyoming and its people have always relied on the spirit of the West to chart new frontiers and face difficult challenges. This amendment undermines that spirit as it succumbs to the allure of easy outs brought about by budget shortcomings at this tough time.

After Bebout reassigned the proposed amendment to Revenue, the committee approved it 4 – 1, with Sens. Peterson, Case, Kinskey, and Ellis voting in support.

Senate budget proposes $130 million in cuts to Wyoming schools
Scroll to top
Share this ArticleLike this article? Email it to a friend!
Email sent!