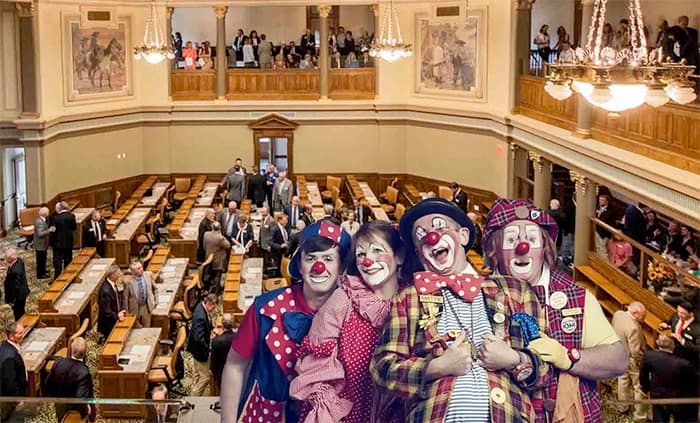 Send in the clowns.

The Wyoming Legislature will convene a special session Tuesday to oppose federal COVID-19 vaccine directives. It will be a pointless and self-serving exercise in political theater, geared toward advancing politicians’ careers rather than benefiting people in Wyoming.

Just about everyone in the Legislature, it seems, has something to gain from calling this “emergency” session to attack the so-called federal vaccine/testing “mandates.”

Hot-button culture war issues like vaccines are bread and butter for far-right lawmakers, who gain popularity blustering on social media rather than addressing real issues. For instance, since abandoning his campaign for U.S. Congress on Sept. 14, House Freedom Caucus leader Rep. Chuck Gray (R-Casper) has tweeted about virtually nothing but the special session.

For centrist or moderate Republicans, supporting the anti-vaccine session provides the opportunity to prove that they’re not RINOs in advance of the 2022 elections, during which many will face primary challenges from the right.

Even the Legislature’s few Democrats are using the opportunity to offer golly-gee “solution” bills that their colleagues in the supermajority will simply ignore. But this nevertheless allows them to show folks back home just how reasonable they are amidst the madness, even as they mount no real pushback or challenge against it.

Whether anything substantial comes of the session remains to be seen—and seems somewhat doubtful. Even though the Legislature has voted by a simple majority to convene this “emergency” session, both the House and the Senate must next agree on rules that will govern the three-day proceedings. This involves agreement by a two-thirds vote in each chamber—a high hurdle, especially since in recent years the two chambers have rarely agreed on much.

Even if they do manage to proceed, it’s unclear what the state lawmakers hope to achieve to thwart federal vaccine rules. State laws tend to have little or no power to nullify federal directives, and the federal government has a number of tools to compel businesses to comply regardless of state laws.

But that doesn’t matter, or maybe it’s even the point. Everyone in the Wyoming Legislature will have already made their political hay.

Each of the Wyoming lawmakers who officially called for a special session seems to have their own self-serving reasons.

For instance, Rep. Albert Sommers (R-Pinedale), the House Majority Floor Leader, finds himself among an increasingly radical Sublette County GOP, which subjects even its most stalwart conservative members to purity tests. Co-sponsoring the anti-vaccine session will help Sommers, a pragmatic moderate, make the grade.

The federal vaccine mandates are rumored to apply to any companies with more than 100 employees, forcing them to ensure all their workers are either vaccinated or regularly tested. As the CEO of Wyoming Sugar Company, Greear is the only sitting legislator who owns a business that would be subject to these rules.

One would imagine this direct conflict of interest might compel a lawmaker to step back. But not Greear, who is accustomed to using his political position to benefit himself. In 2017, Greear used his seat in the Legislature to help secure nearly $6 million in state aid for his company from the Wyoming Business Council. Since then, he has repeatedly returned to the state with his hand out whenever the beet crop wanes. It’s no shock that he would use his position as a lawmaker to try and shield his company from federal mandates.

Of course, the Legislature’s moderates and hucksters are simply following the drum of the far-right radicals, who increasingly control the agenda. Even though they attempt to present a unified front, their arguments tend to be schizophrenic.

Driskill, the session co-sponsor, says he is motivated to fight the mandates because, he said, “It is massive overreach for the feds to dictate to private business what their employees have to do.”

But Gray, the former U.S. Congress candidate, is sponsoring two bills for the special session, and one would enact $500,000 fines for companies that refuse to hire an individual based on whether they are inoculated. Is that not also meddling in the affairs of private business? Oh well.

Sen. Tom James (R-Rock Springs) is bringing a bill to establish fines and even jail time for public servants who attempt to implement federal vaccine mandates. This is odd, because like most states Wyoming has used vaccine mandates as standard public health tools for decades.

Wyoming has used vaccine mandates for decades. Virtually no one in Wyoming is actually unvaccinated.

Virtually no one in Wyoming is actually unvaccinated—against illnesses other than COVID, at least.

In order to attend public or private school in Wyoming, children must submit to a regimen of vaccinations for a whole host of diseases, including diphtheria, measles, mumps, hepatitis B, whooping cough, rubella, and polio.

The idea that Wyoming is against vaccine mandates is simply false, and legislators know it. But such facts are inconvenient for their political stage plays.

Special sessions are designed for emergencies. A federal COVID-19 vaccine mandate—for which people can get a waiver for religious exemptions, or skip the shots by being tested every week—doesn’t meet that standard.

Meanwhile, as lawmakers waste time and public money (roughly $25,000 a day) for a bogus cause, Wyoming’s real crises remain unaddressed.

The state’s fossil-fuel based economy is collapsing as the world turns toward renewable energy, threatening jobs and revenue that support our basic institutions. Meanwhile, tens of thousands of people can’t afford to go to a doctor, our suicide rate is spiking as mental health services decrease, and youth are streaming out of state for lack of opportunities.

But instead of confronting these issues, our politicians decide to focus their energy on the culture wars, with few solutions to offer in response to Wyoming’s many very real problems.

Cheyenne is a gerrymandered mess
Scroll to top
Share this ArticleLike this article? Email it to a friend!
Email sent!